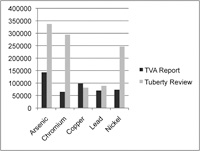 Pounds of toxics released in the Dec. 2008 ash spill at Kingston, TN. The chart shows shows the difference between the TVA toxic release inventory report of Dec. 2009 and the results calculated by Dr. Shea Tuberty using TVA’s own values. (Graphic by Appalachian Voice, click for bigger image)

When the Tennessee Valley Authority released its “Toxics Release Inventory” (TRI) report in December 2009, environmental organizations such as the Environmental Integrity Project expressed concern at the amount of toxins released into the river.

According to TVA spokesman John Moulton, “toxic metals, in general, remain bound to the ash and do not become soluble in moving water such as river currents.”

However, a toxicologist’s recalculation of the “mass balance” of heavy metals shows serious flaws in TVA’s methods and puzzling omissions of the most soluble toxins.

At the request of The Appalachian Voice, associate professor Shea Tuberty of Appalachian State University re-calculated the total amount of toxic materials in eight billion pounds of fly ash spilled into the river.

Tuberty calculated only the ash spilled into the river, using TVA’s own values for the parts per million of heavy metals in the ash. He also accounted for the difference between normal background levels of heavy metals in comparable amounts of soil.

Tuberty deduced that over 5.4 million pounds of heavy metals of various kinds have been released directly into the water, as opposed to the 1.3 million pounds reported as water releases by TVA in its TRI report.

For instance, Tuberty calculated that the ash spill released over 337,000 pounds of arsenic into the river. TVA reported only 143,000 pounds.

This is not the first time that TVA’s reported data has been called into question.

A week after the spill, TVA was reporting that water samples showed heavy metals well below legal limits. However, samples taken from the Emory River by the Waterkeeper Alliance and analyzed by Appalachian State University showed a very different picture.

For example, arsenic was 300 times the allowable amounts in drinking water, and all of the water samples were found to contain elevated levels of arsenic, barium, cadmium, chromium, lead, mercury, nickel and thallium.

In May 2009, independent scientists found elevated levels of selenium in fish downstream.

“Overall, these test results indicate much more severe impacts to water, sediment and fish than has been previously reported by TVA, which tells us they haven’t been sampling in the right places,” said Upper Watauga Riverkeeper Donna Lisenby.

The zero value for selenium in the recent TRI report is, under these circumstances, highly questionable, Tuberty said.

Tuberty also noted that the TRI report showed that zero pounds of cadmium were released in the toxic ash spill. Yet scientists are using cadmium as a “tracer” to show the extent of the toxic plume from the Kingston spill.