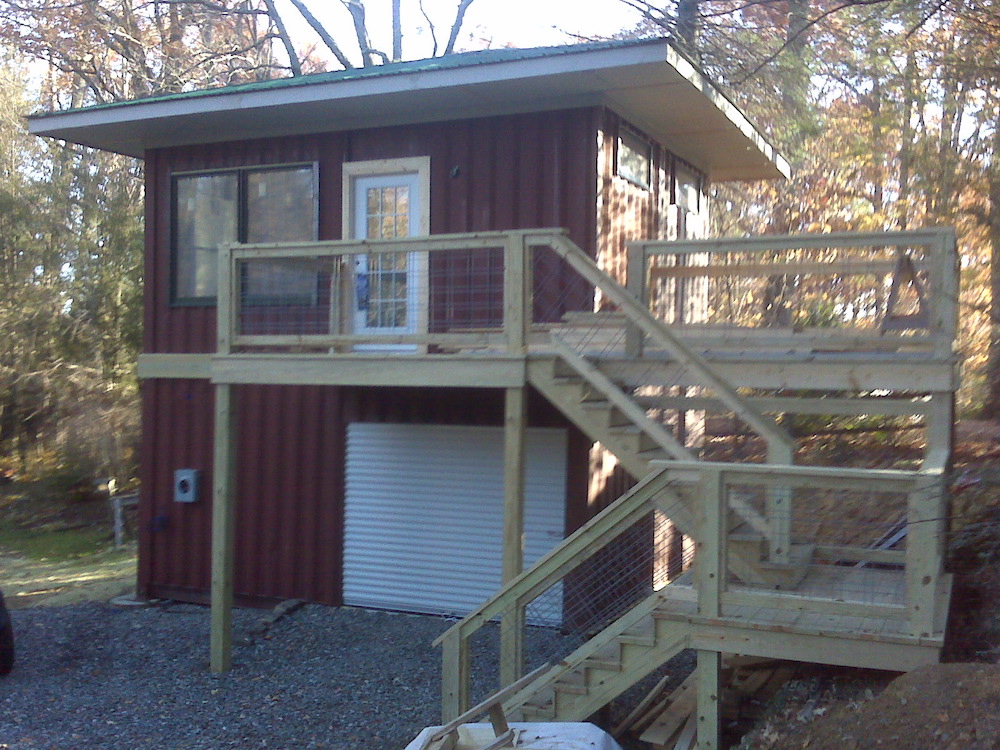 When you drive by the tiny red house on Hill Street near downtown Boone, it looks like any other college-student dwelling— a small, square, structure with an apartment perched atop a one car garage.

Upon closer inspection, however—perhaps a casual rap of your knuckles against the siding—you will discover that the structure of the house is made not from traditional wood, but the 14-gauge steel hull of a shipping container, the kind that crisscrosses oceans perched in huge stacks—sometimes 9 or 10 high, and as many as 10,000 per load—on cargo ships that ferry imports and exports around the world.

You have just met your first Dwellbox.

An Ocean’s Worth of Opportunity 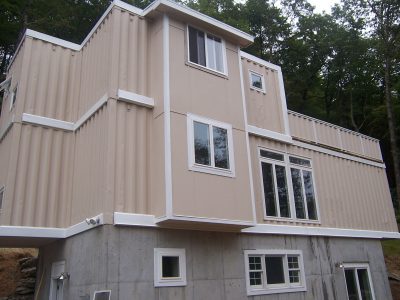 Many shipping containers make only one trip around the world, starting out in countries like China and ending up on the shores of the United States and other consumer countries. It is often cheaper for companies to store the containers rather than send them back empty; between 300,000 and 700,000 empty containers sit dormant in U.S. shipping yards at any given time.

A trend of using these, well, unused shipping containers as building foundations has been growing internationally for years. Places like Australia, New Zealand and Western Europe have embraced the concept of recycled container houses, but the trend has been slower to catch on in the U.S. As of last spring, there were fewer than 80 activated permits for shipping container houses in the entire country.

A little over a year ago, three young entrepreneurs from Boone, N.C.,—Casey Pond, Ethan Anderson, and Jeffrey Scott—became enamored with the concept. The partners all had previously worked on sustainable building and renewable energy projects, so the opportunity to utilize recycled shipping containers as structural building materials seemed a natural fit. Realizing there was a distinct lack of builders offering this unique service, they created Dwellbox.

Their first project was the 320-square foot apartment on Hill Street, constructed of two 40-foot containers cut in half and stacked. It was a learning process for the group, but after 90 days, some broken tools, and a little sweat and determination, the first dwellbox was complete.

“The steel [in shipping containers] is very strong, not the type you can use a normal skill saw on,” Dwellbox Principal CEO Casey Pond said with a chuckle.

From an environmental standpoint, using recycled shipping containers as the structural element of a home is a no-brainer. “For the basic building block you start with, you do not have to use any new product,” said Pond.

From a framework standpoint, the benefits are simple–the heavy-grade steel superstructure and exoskeleton or “skin” means less need for reinforcement and fewer structural concerns, allowing the containers to be cantilevered , stacked , or cut to produce large clear spans.

Add in the speed of construction, inherent added efficiency (shipping containers are almost air-tight from the start), and a lower cost per square-foot than traditional frame homes, and shipping container dwellings firmly establish themselves as a formidable alternative.

“Like Adult Legos”
Preparing a shipping container for a house is relatively simple in terms of construction. In-house designer Adrian Tate works with the client to determine the basic schematics of the structure; an engineer then makes alterations to ensure the designs match with the structural integrity of the shipping container and the technical requirements of the construction site. Welding cuts are made into the container’s steel using heavy-duty welding tools, carving out door and window holes and removing walls where two containers will be connected together to make a larger space.

The containers are then driven to the site and cranes hoist them into position on the foundation, which can be like traditional home foundations or more unusual such as concrete pylons.

The interior is finished very similar to a regular home. An interior frame is constructed, drywall is applied, and insulation sprayed between the inner and outer walls. Isonene is the preferred insulation for shipping container homes, as the primary—and indeed one of the few—issues with these dwellings is a tendency to create condensation, and the sprayed insulation creates a barrier which eliminates this problem. Plumbing, electricity, and other finishing jobs are applied in the normal fashion.

Dwellbox is currently able to build a turnkey shipping container home for around $100 a square foot in a market that averages between $150 and $350 per square foot for a traditional structure. The company can also just design and prepare the steel structure, letting the client either do the interior work themselves or subcontract the finishing work themselves. How little—or how much—a client spends on a home depends of course upon the complexity of the design and the extent of finishing touches.

“A lot of people that are into container homes are into more contemporary designs,” said Pond, “but the truth is you can make them look like anything, even a log cabin.”

The sustainability of the interior work that Dwellbox does is entirely up to the client. “We openly advertise that we are adept at integrating renewable energy into our structures,” said Pond.

Aside from their residential dwellings, Dwellbox is working to bring the concept of “shipping containers as building blocks” into other, less mainstream, markets.

Their newest project, still in the design phase, is a Mobile Learning Lab for Caldwell Community College in Lenoir, N.C. The school, recently awarded the state’s Green Business Fund, wanted to use the funds to create a lab for teaching aspects of traditional trade skills integrated with renewable and sustainable technologies.

The partners are also hoping to venture into temporary workforce and disaster relief housing for governmental agencies such as FEMA and Homeland Security. They have proposed converting shipping containers into rapid deployment structures that would be far sturdier than traditional tent cities often erected in disaster zones such as in the Gulf Coast in Hurricane Katrina’s aftermath.

Finally, the Dwellbox team hopes to educate other builders, and even the government, on the benefits of recycling shipping containers. “We are working on trying to put together a guide on how to work with the containers,” said Pond. “Since there is no building code for these structures yet, we also hope to help set the code standards so that you wouldn’t have to get an engineer for these projects.”