How to hike the Appalachian Trail:The nitty-gritty details of a long-distance trek 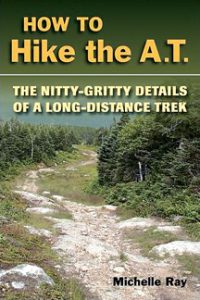 “In a world full of mediated spaces and experiences,” writes Michelle Ray, “a trip to the back country allows an individual the sort of autonomy he or she craves.” As Henry D. Thoreau said, a person may rationalize hiking as going to the woods “to live deliberately.”

Out in time for hiking season, this deliberate and lively book explains the why, the how and the where of the Appalachian Trail, offering advice on subjects ranging from physical conditioning (three months of daily training) to packs for women (for narrower shoulders) to drying out wet shoes (take off the laces, and/or stuff with newspaper).

The book also describes some of the AT’s traditions, such as trail names and the “Trail Days” festival in Damascus, VA, held the weekend after Mothers’ Day, and also covers the “who” of hiking with stories about some thru-hiker legends. 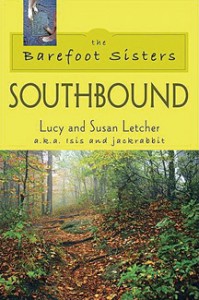 To be on the trail with Isis and Jackrabbit (Lucy and Susan Letcher) is, first of all, to admire some down-home grit. After all, can you imagine these women setting out on a frosty morning, without hiking boots, or even so much as a set of flip-flops?

The sisters prove that good set of calluses on the feet can compensate for a lot of gravel, and – apparently – a little bit of frost.

Like every thru-hiker on the Appalachian Trail, the Barefoot sisters run into a cast of characters worthy of Jack Kerouac on the trail. There’s Tuba Man, German Forest, Solid, and Playfoot – all described with insight and vivid writing.

The determination of the sisters is astonishing. Co-author Susan Letcher (Jackrabbit) recounts the doubt she felt after the first few bare footsteps on the trail; she turned to her sister, “half expecting to see the same doubt mirrored in her face,” she writes. “But her eyes were shining, and she smiled with an almost feral intensity. It was a look I would come to know all too well over the next year and a half, and it meant ‘I am going to do this and no one had better try to stop me.’”

Eventually, hiking in the moonlight, they begin to feel a connection to a different culture, an older, nomadic way of life, as if they belong to the woods and stars.
It’s a fun, refreshing read, just right for packing in a daypack or leaving for friends along the trail.

Other recent AT books include:

— Awol on the Appalachian Trail by David Miller,Wingspan Press

— The Appalachian Trail : How to Prepare for & Hike It by Jan D. Curran, Rainbow Books

— A Walk in the Woods: Rediscovering America on the Appalachian Trail by Bill Bryson, Anchor, Re-issued 2006