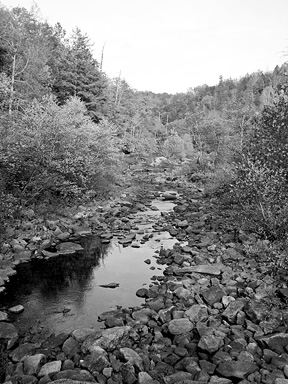 “There is nothing more eloquent in Nature than a mountain stream.”

On September 12, 1867, John Muir crossed the Emory River on his 1,000-mile walk to the Gulf of Mexico. He had set out 12 days earlier from Louisville, Kentucky on his expedition south to the Gulf. The Emory River, a tributary of the Clinch River in northeast Tennessee, is a small watershed of 872 square miles drained by 1,283 miles of streams. Like Muir’s journey, the waters of the Emory eventually end up in the Gulf, but after meandering westward through the Clinch, Tennessee, Ohio, and Mississippi rivers, passing by Chattanooga, Huntsville, Paducah, Memphis and New Orleans on their journey.

“Its banks are luxuriantly peopled with rare and lovely flowers, and overarching trees, making one of Nature’s coolest and most hospitable places.”
The cool, forested canyons surrounding the Emory River are not only welcoming for travelers, but extend their benefits into the waters below. The clear, fast-flowing streams are home to over 65 species of fish, including three imperiled species, the Ashy Darter, Sickle Darter, and Spotfin Chub. All three require cool, clear water, sand or gravel river bottoms and a healthy assemblage of aquatic insects for food. Spotfin Chubs, a species protected under the Endangered Species Act, lay their eggs in crevices between rocks. The surrounding forests, known as riparian zones, are necessary to shade the water and prevent excessive siltation from clouding the water and filling in these crevices with sediments. These rare fishes have been lost from much of their historic range because of the loss of these riparian forests from mining, logging, and urban development. The Emory River system is one of the few refuges they have left.

“The long narrow valleys of the mountainside, all well watered and nobly adorned with oaks, magnolias, laurels, azaleas, asters, ferns, Hypnum mosses, Madotheca, etc. Also towering clumps of beautiful hemlocks.”
The sandstone cliffs alongside the Obed River, the main tributary of the Emory River, form gorges that rise up to 400 feet above the river valley. This area remained undeveloped in part because these steep valleys with poor soils are not suitable for farming. The Emory River system drains the Cumberland Plateau, a narrow upland province sandwiched between the higher elevation Ridge and Valley province to the east and the lower Highland Rim to the west. The deep gorges in the Emory and Obed rivers follow a major fault zone in their eastward flow towards the Clinch River. In 1976, much of the system was designated a Wild and Scenic River, managed by the U.S. National Park Service.

“Near this stream I spent some joyous time in a grand rock-dwelling full of mosses, birds, and flowers. Most heavenly place I ever entered.”
Over 700 species of vascular plants – ferns, conifers, and flowering plants – have been documented from the Obed Wild and Scenic River watershed, including 16 imperiled species. One of these, the Cumberland Rosemary, grows in sandy pockets on riverbanks or gravel bars only in Cumberland Plateau streams. The flora is dominated by similar types of shrubs that grow in these riparian zones, unique to this region. Above the land and water, Bald Eagles can be seen soaring and hunting prey. A large Great Blue Heron rookery is located on an island four miles upstream from the Clinch River. The quiet splendor of the region comes from this special combination of geology and biology.

“Forded the Clinch, a beautiful clear stream that knows many of the dearest mountain retreats that ever heard the music of running water.”
Unfortunately, these beautiful tributaries of the Tennessee River, which have provided refuge for wildlife and humans alike, are now threatened by the impacts of development, largely for energy production. The hydroelectric dams, which are now so common across the Tennessee Valley, impound the shallow, running water leaving deep reservoirs that are not suitable habitat for many native aquatic species. Contaminants such as PCBs and mercury have been released into the Clinch River from nearby industrial sites. Mining activities, predominantly for coal in the Cumberland Plateau, have led to siltation, coal fines, and acid mine drainage, which leave streams bright orange and unable to support aquatic life. The December 2008 fly ash spill into the Emory River is not the first environmental insult to the region, nor the only coal ash spill into the Clinch River system. Though much of the Emory River watershed is protected by various federal and state agencies, we all bear a burden for its protection from further development and degradation. The best way to ensure that the music of the Emory River streams will continue for future generations is to reduce our energy consumption and use our resources carefully.