Altered Lives- The Human Side of an Environmental Disaster 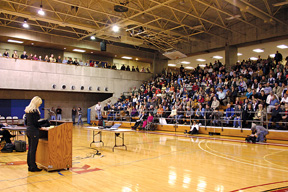 Legal consultant Erin Brockovich speaks to a crowd of Roane County residents in Harriman, TN. “It’s your community--Take it back,” she told the audience. Photo by Jamie Goodman


When looking at photographs of the TVA coal ash disaster in Roane County Tennessee, the enormity of the spill’s environmental impact is immediately apparent.
According to some, the disaster could only be put into perspective from the air. But in other ways, the impacts are best seen on the ground. The human impact of this spill is part of this story, as people and their environments are intimately entangled. And, as with the environmental side of the story, we are not sure what the full extent of the impact will be.

At a community meeting on January 8, several hundred people gathered to hold a forum on the impacts they were feeling in the aftermath. Some of them had come to see the ‘real’ Erin Brockovich, some to hear the legal advice offered by the NY-based firm Weitz & Luxemburg. Others came to air their concerns, their grievances, and their anger in a public forum. One man who came to the mic began by posing questions that were at the heart of many others asked that night. “What’s going to happen?” he asked. “Am I going to die?”

Reports of acute health effects from residents living on the lake were many and varied from rashes to sudden and violent asthma attacks. Penny Dodson, a part-time nurse who also takes care of her 18-month-old grandson, Evyn, wasn’t able to attend the meeting, but her concerns about the fly ash stem from Evyn’s severe response. 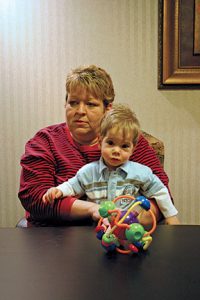 Penny Dodson sits with her grandson Evyn. The two had to leave their home and relocate to a hotel after Evyn became ill from exposure to the fly ash. Photo by Jamie Goodman

Evyn was born premature at 33 weeks. His early days were not easy; he has several medical conditions, among them a seizure disorder, asthma, and a very sensitive digestive track.

After the spill, Evyn became ill and had to be rushed to the Emergency Room. The doctor there informed Dodson that the problems Evyn had been experiencing were a result of irritation from the fly ash, specifically from breathing in airborne particulates. He advised them not to return home. “Avoid it, relocate, don’t breath it,” Dodson cites.
Though TVA agreed to pay for hotel fees for Dodson and her grandson until they could be relocated, she feels TVA is “not being forthcoming” with information about the ash’s potential risks to human health.

Dodson says she couldn’t get the Material Safety Data Sheet (MSDS) on the coal ash from TVA when she requested it, a complaint brought up by a number of residents at the January 8 meeting. She says that when she raised concerns about breathing in the fly ash to TVA representatives both before and after Evyn began experiencing health effects, they told her not to worry. “’The ash is wet, it won’t be a problem,’” Dodson recounts.

But for Evyn it was; not only did they have to relocate immediately, they also could not bring any fabric or upholstered furniture with them to their new residence. This meant no rugs or carpets, no couches or upholstered chairs, and no beds.

Dodson knows Evyn is more sensitive than most others, but her grandson’s illness feels like a warning, that the ash is harmful and it could make others sick. “Evyn was the first one that got sick. Why wasn’t that shared?” Dodson asks.

Though only three homes were lost completely due to the spill, 42 pieces of property were damaged, and the economic impact from drops in property value, decreased tourism dollars will surely be felt in the coming year. Beyond these immediate and direct impacts, there are other, less obvious economic consequences. Speculations about potential rate hikes due to the cost of cleanup, for instance, are widespread in the community.

Richard Crass, Jr. and Teddy Argue, two men that work building docks on the now devastated lake area, drove down to Swan Pond Road to see how badly their business would be hurt. “They ruined it. The lake is ruined,” Argue said, looking at the scene in utter disbelief. Even a full 2.5 weeks after the disaster occurred, the damage was still hard to comprehend. Especially considering the uncertainty of TVA’s plans for the coves and the lack of a concrete timeline for cleanup, business for the two men didn’t look very good. 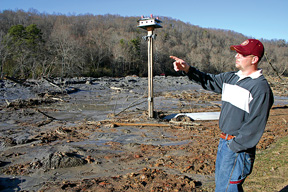 Travis Cantrell has lived on the river for eight years, but, since the disaster is looking to relocate. In the photo, he stands in what was once his backyard. Photo by Jamie Goodman

Since the disaster, many people’s viewpoints on TVA and the Kingston plant have shifted dramatically. Both Dodson and affected resident Travis Cantrell say that they had some peripheral idea of the risks presented by the nearby coal-burning plant, neither had any knowledge of the scale of possible damage. “We live here knowing that’s it not a good place to live,” Cantrell says looking out at the water. “The cancer rate around here has been high for years, you’ll see signs around saying ‘do not consume so much of this fish per year’ we thought that was what we had to live with from up there [the nearby Oak Ridge nuclear facility], and I guess people have learned to deal with that,” he explains. But few knew that an ash spill was even possible, Cantrell says, “We didn’t know this could happen at all, we didn’t even really know what that [the coal ash pond] was.”

A way of life taken away

Cantrell lived on Swan Pond for eight years. “We used to party out here until two or three in the morning in the summer,” he says, pointing to a crumble of aluminum siding partially submerged in coal ash, which used to be their boathouse. Cantrell says he came outside the morning after the spill to an unrecognizable sight. “I was like ‘whoa, where’d it go?’”
With the river and coves inundated with ash and the environmental integrity of the area drawn into question, many are questioning whether they will stay or go. Cantrell will leave as soon as he can, considering himself fortunate to have been leasing when the disaster occurred. “Long as I am took care of, I’m happy,” Cantrell says with a shrug, “I just want out of here.” Dodson feels differently. “Everything we have is there,” she says, referring to her rented home on Swan Pond Road. “Right now, that’s still my home irregardless [sic] if I own it or don’t own it, that’s my home.”