Seventy five years ago, the area where the Gauley River and the New Rivers meet became known as the site of America’s worst industrial tragedy.


The same water power that today attracts recreational enthusiasts from over the world was, at the time, attracting the attention of hydroelectric engineers. They built a massive tunnel that channeled water from the New into the Gualey to generate over 100 megawatts of electricity between 1928 and 1932.


By 1933, news of some kind of disaster was beginning to emerge. Hundreds of men – now estimated at 476, most of them African American -- died simply because they were not given protective gear. Most of the victims were buried in common, unmarked graves. Thousands more were permanently injured, unable to walk home to other states, giving Hawks Nest, WV, the appearance of a “town of the living dead,” according to a 1936 magazine article.


The men were killed by silicosis, an “occupational disease” that occurs when workers breathe fine particles of glassy sand that cuts through lung tissues with steady and predictable effect.


The deaths and injuries could have been prevented had the company issued dust masks and used “wet” drilling methods. But wet drilling might have diluted the value of Gauley Mountain’s pure silica that was in the tunnel’s path.


Dust masks were not used because, the company claimed, they did not know about silicosis. Even so, white engineers who took rock samples in the tunnels were using dust masks. Apparently, the lives of African Americans were hardly thought to be worth the cost of the masks.


The racism, arrogance and cruelty was so astonishing, even in the 1930s, that a full scale Congressional investigation was set in motion.


The investigation uncovered heartbreaking stories about whole families wiped out by silicosis, wives having to file suits just to get their husband’s bodies, and parents searching the Hawks Nest workers camps for their missing sons.


The investigation also uncovered a horrific pattern of secret cemeteries, subversion of the law and threats to witnesses by Union Carbide and its contractors. 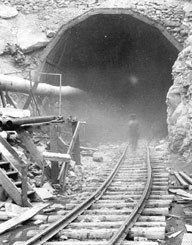 It concluded that the tunnel project had been carried out “with grave and inhuman disregard for the health, lives and future of the employees.” The committee placed the blame squarely on the shoulders of the company: The negligence “was either willful or the result of inexcusable and indefensible ignorance.”


In the end, none of the company officials went to jail. A few families of the victims received settlement checks for a few hundred dollars at most. But most significantly, the laws regarding occupational disease and labor safety were rewritten during the New Deal era with the Hawks Nest incident in mind.


The incident became even more famous when poet Muriel Rukeyser wrote “The Book of the Dead” in 1938 and included many of the documents from the Congressional committee.


Aside from that book, the companies successfully suppressed information about the incident. Even a novel called Hawks Nest by Hubert Skidmore was pulled out of print by the publisher, and Skidmore himself died in a mysterious fire.


As late as the 1970s, historians said they were receiving death threats and facing legal action for trying to uncover the truth about the incident. To this day, many of the grave sites have not been found.


Physician Martin Cherniak was the first historian publish a book on the Gauley disaster. Cherniak said he struggled to maintain his objectivity while writing The Hawks Nest Incident: America’s Worst Industrial Disaster. Ironically, it was published only a few years after Union Carbide’s disaster at Bhopal, India, where 10,000 people died from a cyanide leak at a chemical plant on Dec. 3, 1984.

In 2008, historian Patricia Spangler published The Hawks Nest Tunnel: An Unabridged History. Along with a summary of events, Spangler published hundreds of full original documents surrounding the incident. This valuable work allows us to objectively analyze the disaster while, at the same time, sense the outrage and horror behind the witness testimony and committee reports of the first Gauley disaster 75 years ago.


Today, the tunnel from the New River to the Gauley still generates 107 megawatts of electricity, like it did 75 years ago. Since it uses a public resource, the project was originally to revert in ownership back to the state of WV in the 1980s. However, the state exchanged it for land that was not worth a fraction of the value of the Hawks Nest electrical complex. And the tunnel itself, as a point of fact, was never worth the lives it cost.