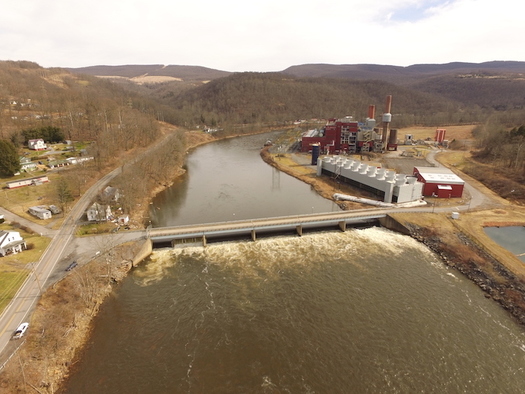 The Albright Dam is the last dam in West Virginia on the Cheat River, and environmental groups say it has long been an impediment to fish migration. Photo by Joey Kimmet/Friends of the Cheat.

The U.S. Interior Department recently announced $1 million in funding toward removing the defunct Albright Dam as part of an effort to improve water quality and restore free-flowing waterways nationwide.

Lisa Hollingsworth-Segedy, director of river restoration for the advocacy group American Rivers, said the private dam impounds water for about a half-mile.

“The dam doesn’t serve any purpose at all, and it is a barrier for really important fish species,” Hollingsworth-Segedy asserted. “For the people of West Virginia, the dam also contributes to decreased water quality in the Cheat River.”

She added removing the dam would address environmental concerns and reconnect more than 1,000 miles of rivers and streams in an area of the Mountain State rich in biodiversity. There is wide agreement the dam has outlived its usefulness, but the state has to come up with about one-third of the cost to remove it.

Frank Jernejcic, a member of the nonprofit group Friends of the Cheat River and a retired biologist, explained dams can harm fish populations by blocking their natural passage between feeding and spawning grounds.

“Fish, particularly walleyes, have moved upstream from Cheat Lake through the Cheat Canyon, and they’re now stopped at the Albright Dam,” Jernejcic pointed out. “Removal of the dam will allow the walleyes to move on upstream.”

A recent investigation by The Associated Press found defunct or poorly maintained dams across the country can pose serious threats to communities.

This story was originally published by Public News Service on June 3, 2022.