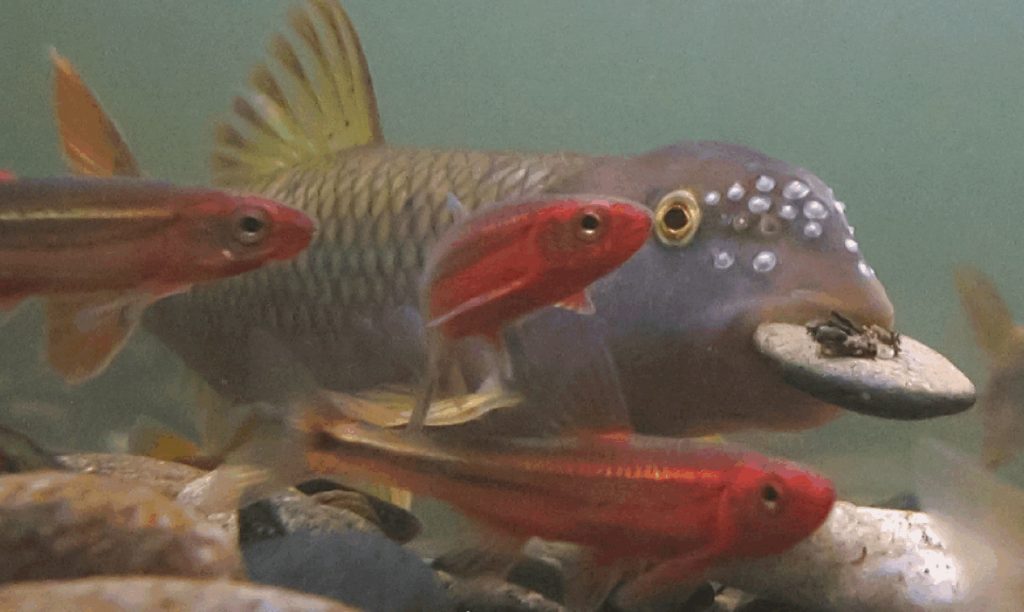 One of the more unique families of fish a river snorkeler may encounter is the Nocomis genus, known as mound-building chubs. Though only about 12 inches long, chubs are important to many other fish.

“The various species of chubs gather stones into a mound about one foot high and three feet in diameter,” snorkeler Casper Cox says. “These mounds are situated in flowing, silt-free water, often at the heads of riffles or just downstream. The mounds offer protection for the developing eggs as they are covered by stones to prevent predation, yet the spaces between the stones provide flowing oxygenated water to aid in their development.”

“Not only do the chubs use their mounds to spawn, but many other species take advantage of the chubs’ work,” he continues.“Stonerollers, as well as striped, warpaint, Tennessee, saffron, and scarlet shiners can all be seen swarming over these active mounds in the springtime. It becomes quite a show to witness, as the colors are vibrant, nearly electric, with various species in enhanced spawning colors,” he says.

The rivers of the southern Appalachian states are many and varied. They beckon novice and experienced snorkelers alike. Click here to learn more about snorkeling Appalachian waterways.

The Blue Ridge Mountains act as a barrier in the distribution of these fish by preventing their migration to different regions. During a freelance fish survey, Scott found bluehead chubs in the Atlantic drainage and river chubs in the Tennessee and Mississippi River drainages, as expected.

But Scott found an anomaly in the upper reaches of North Carolina’s Linville River, which drains into the Atlantic — a river chub. Intrigued, Scott and Cox snorkeled the area above Linville Falls and found only river chubs.

Geologists believe that the upper Linville River once flowed west into the Tennessee River drainage, which flows into the Gulf. But the stream was captured by the east-flowing Linville River, possibly as part of a geologic upheaval or other shift more than 10,000 years ago. This geological shift could explain why Scott and Cox found river chubs in the Linville River.