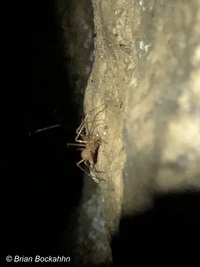 The tiny Linville Caverns spider blends in well with the surrounding rock. Photo by Brian Bockhahn

North Carolina state legislators could soon vote on a bill that would make the Linville Caverns spider an official symbol of the state, accompanying the cardinal, the Frasier fir and the dogwood.


N.C. Sen. Ralph Hise (R) is the primary sponsor for the bill, S.B. 195. He first introduced the bill in 2017 and reintroduced it March 2021. The bill awaits a vote in the Senate Committee on Rules and Operations.

The Linville Caverns spider, also known as Nesticus carolinensis, is a subspecies of cave cobweb spider with orange-white coloring. These elusive arachnids have very small bodies that blend in with rock. Males can grow to be 4.5 millimeters in length, whereas females are closer to 3.5 millimeters long.

McDowell, Burke, Avery, Watauga and Caldwell counties are home to this endemic species of spider, thought only to be present in Western North Carolina. The Linville Caverns spider is listed as significantly rare by the NC Natural Heritage Program, a project of the NC Department of Natural and Cultural Resources.

“It’s like a very small snow leopard,” says Linville Caverns tour guide Bryce James, referring to the spider’s ability to blend in with its surroundings.

James has worked in the caverns for about three years. He always mentions the species when guiding tours at the front of the caves, where five or six spiders have built webs over gaps in the rock. Mature spiders thrive in the dark zones toward the back of the cave, where the species is more likely to reproduce.

According to NC Natural Heritage Program staff, the first encounter with the arachnid was in 1947 by Sherman Bishop, scientist and professor from New York. The species was not documented again until the 1980s, by a retired North Carolina resident.

“Conservation-wise, if we protect the habitat we will be protecting the spiders,” says Bockhahn, explaining that greater awareness of this rare spider is key to protecting both the species and its habitat.

If the 2021 bill becomes law, tour guide Bryce James believes that the Linville Caverns spider, just as the name suggests, would attract more groups to the show caverns.

“Every species has its right to thrive,” James says.