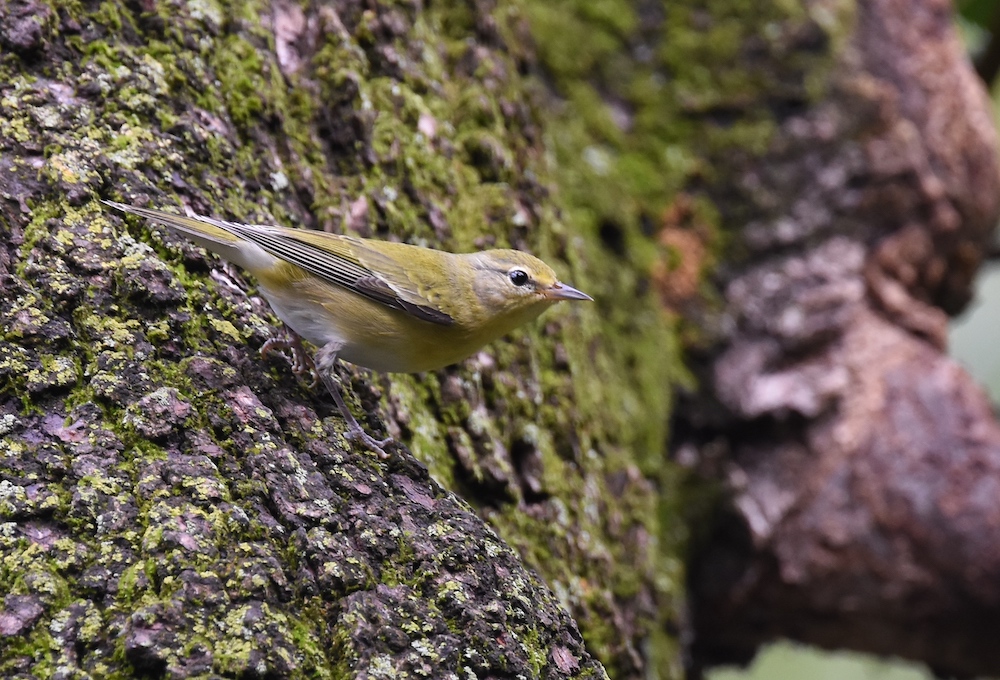 The Tennessee Warbler is protected under the Migratory Bird Treaty Act. Photo by Andy Reago & Chrissy McClarren / CC by 2.0

Whether by sight or song, protecting birds in Appalachia and beyond could become a more difficult task. On Jan. 5, the U.S. Fish and Wildlife Service finalized a reinterpretation of the Migratory Bird Treaty Act of 1918, creating a loophole for large gas and oil companies. But the Biden administration has pumped the brakes.

Before the reinterpretation, this bedrock environmental law prohibited both the purposeful and incidental killing of migrant bird species. Under the new version, only the intentional killing of these species is illegal.

The changes were scheduled to go into effect on Feb. 8. But on Feb. 4, the U.S. Department of the Interior delayed the implementation of the rule by one month and opened a 20-day public comment period on the reinterpretation. The Biden administration also expects that there will be “further opportunities to engage” on the rule, according to The Hill.

The Trump administration’s revision of the Migratory Bird Treaty Act was one of many regulatory rollbacks that President Joe Biden ordered to come under review on Inauguration Day. The U.S. law implements four international treaties signed during the 20th century.

“The Trump administration sought to overturn decades of bipartisan and international precedent in order to protect corporate polluters,” Interior spokesperson Melissa Schwartz said in a statement. “At President Biden’s direction, Interior is delaying and reviewing the Trump administration’s rollback of the MBTA to ensure continued progress toward common sense standards that protect wildlife and their habitats.”

The federal government has used the act to hold the energy industry accountable with fines and prosecution for activities that kill migratory birds for the past several decades. Under the new definition, companies would not be fined for incidental migratory bird killings that result from events such as oil spills or pipeline accidents.

Before, the threat of consequences from the act encouraged companies to take extra precautions to ensure the safety of birds. Under the reinterpretation, companies are less inclined to take extra steps such as a pre-construction survey for bird species, since any harm that ensues will not result in direct financial repercussions for themselves.

“It doesn’t really punish companies for unforeseen consequences,” says Curtis Smalling of the North Carolina chapter of the Audubon Society, one of the oldest nonprofit environmental organizations devoted to the protection of birds and their natural habitat. “The changes the Trump administration has put forward make it where you have to physically take the bulldozer and run over the bald eagle nest.”

On Jan. 19, several environmental organizations including the Audubon Society filed a federal lawsuit against the reinterpretation.

“While we’re confident in the wide-ranging and bipartisan support to reinstate these vital protections, this lawsuit is necessary to challenge a plainly illegal policy that will devastate our bird populations,” said Sarah Greenberger, interim chief conservation officer of the National Audubon Society in a press release announcing the lawsuit.

In Appalachia, migratory species such as warblers and thrushes stand to be affected by the change.

“The Appalachians are really a critical migratory pathway,” Smalling says. “Part of the reason for that obviously is elevation and topography, but the other reason that it’s important is it is largely forested. Pipelines, transmission lines, wind turbines, deforestation — all those things have the potential to have a negative impact, and the [Migratory Bird Treaty Act] holds people and businesses accountable to do the things they can do that we know help.”

Smalling said that their data shows a skew in population where adult birds are in the mountains and juvenile birds are in the Piedmont coastal plain. This means the Appalachian Mountains have a disproportionate effect on species’ ability to thrive by giving experienced adults a safe passage. The Appalachians aren’t only important for adult birds to lay eggs and reproduce, but also for cross-country birds that migrate south for the winter such as the Tennessee warbler, a species that Smalling says “really depends on the Appalachians.”

There were pushbacks from environmentalists and bird advocates on the proposed change, but the former Trump administration still continued with the legal process nonetheless.

“The hope is that the Biden administration would act quickly to reinstate those protections through the regulatory side, and publish those ‘new rules’ to go back to the original,” says Smalling.

It remains to be seen if the Biden-Harris administration will take action on the Migratory Bird Treaty Act after delaying the reinterpretation in early February. Congress also has the option to use the Congressional Review Act to reverse the changes.

“I think groups like Audubon are going to be pushing for Congress to take up the original act and clarify the language,” Smalling says. “What constitutes incidental take and how purposeful does that have to be? I would say one of the things that I think is often lost in this discussion is that it really is about specific takes.”

To learn more about migratory pathways, birds in Appalachia, and how to help defend the Migratory Bird Treaty Act, visit the Audubon Society at audubon.org.