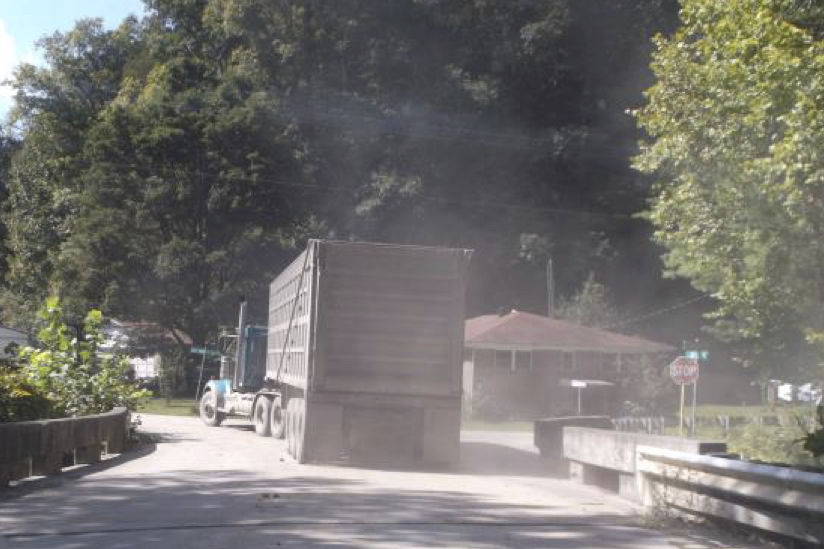 A coal truck rolling through a stop sign near the Owenses’ home in Aily, Va., in September 2018. Photo courtesy of DMME

For two years, Nancy Owens dealt with excessive dust billowing from passing coal trucks onto her property in Aily, Virginia. Numerous communications with state agencies did little to help.

The coal trucks originated from Paramont Contura’s Long Branch Auger Mine. Aside from difficulty keeping her house clean, Nancy Owens stated that the dust aggravates her husband Sonny Owens’ black lung disease. Black lung is an incurable respiratory condition that is caused by prolonged exposure to coal dust in and near coal mines. 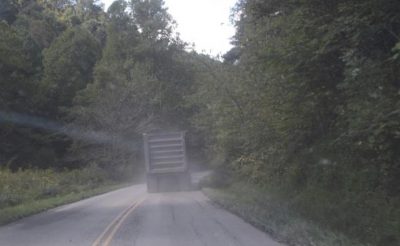 A coal truck kicks up dust as it drives close to the shoulder of the road in September 2018. Photo courtesy of DMME

When the DMME visited the Owenses in September 2018, they found that the limited width of the public roads caused the coal trucks to drop off the shoulder in several places and track mud onto the street. The dust problems were increased due to the trucks driving at high speed and ignoring a stop sign near the Owenses’ house. The agency reached a similar conclusion after investigating a March 2020 complaint filed by Nancy Owens and a February 2020 complaint filed by another local resident. Frustrated with the lack of response from the various agencies, Nancy Owens stopped reaching out in March.

“When the trucks load up and they come up the holler, it slings the mud up on the bottom of the trucks, and then it drops off these trucks onto the road, and then the trucks just keep tracking it,” said Nancy Owens in November. “And then as they track it, we get the dust.”

Today, however, the situation is much different. Within a month of The Appalachian Voice first reaching out to state agencies in October, mine owner Paramont Contura gave the Owenses a direct line to the company that they can call to request a wash truck to clean the road next to their house. But why did it take so long?

According to DMME investigation reports, Paramont Contura told the agency in September 2018 that they would tell the truckers to drive more slowly and stop at the stop sign. Paramont Contura also told the DMME in September 2018 and February 2020 that they would reach out to VDOT about fixing the shoulder of the state road to help with the mud. But a VDOT spokesperson stated in a Nov. 10 email that the agency did not have any plans to do so.

In response to a Nov. 19 email from Appalachian Voices, the Virginia Department of Environmental Quality passed the complaint to the DMME. The DMME sent an inspector to the site on Nov. 23 who informed Paramont Contura of an impending article in The Appalachian Voice on the subject. That day, the mine manager told the DMME that the company would contact the Owenses about the mud and dust issues and that they would voluntarily wash the road and bridge in front of her residence as a good neighbor policy. The manager also stated that they had provided the Owenses with contacts if mud or dust became an issue again. Paramont Contura declined to comment.

“They’ve been coming down every evening,” said Nancy Owens on Dec. 9. “About 3:30 to 4 p.m. they come down and wash it off, and then they go back up and the miners come out. I assume they’re coming down about quitting time.”

This conflicts with how Paramont Contura has dealt with the Owenses’ complaints in the past.

When Nancy Owens contacted the company in the past about the dust problem, Paramont Contura came by every day and washed the road — but not for long. After cleaning the road daily for approximately two weeks, they stopped coming.

“They told us that they didn’t have to do anything because we were out of the 3-mile limit,” she said in November.

After the DMME’s November visit to the mine, however, Nancy Owens states that a Paramont Contura employee informed her that her home being more than three miles away from the mine did not mean that the company did not have to wash the road.

While the Owenses’ dust problems seem to be in the past, residents of Race Fork near Hurley, Virginia, are continuously beset by dust from passing coal trucks. In February, 27 community members filed a joint complaint with the DMME about the clouds of dust wafting from trucks driving from the Laurel Branch Surface Mine. While the agency has issued several citations, the community feels that not enough action has been taken. It remains to be seen if Race Fork will be able to find a solution.