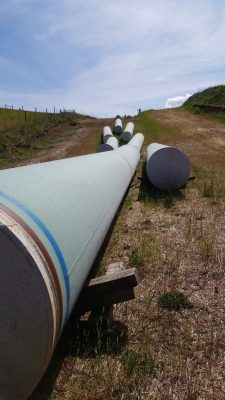 On Oct. 16, the 4th U.S. Circuit Court of Appeals temporarily suspended stream crossing permits for the Mountain Valley Pipeline, a controversial fracked-gas pipeline that is partially built in Virginia and West Virginia. The suspension was requested by several environmental groups including Appalachian Voices, the nonprofit organization which produces this publication.

The court’s mandate came a week after the Federal Energy Regulatory Commission lifted a stop-work order on the entire pipeline save for a 25-mile segment in and near the Jefferson National Forest. FERC also extended the pipeline’s certificate of public convenience and necessity, which allows construction to continue for an additional two years past the original expiration date of Oct. 13.

While pipeline developers are currently unable to burrow under nearly 1,000 waterways in Virginia and West Virginia, it is unclear whether the company is able to resume construction elsewhere, according to The Roanoke Times.

Developers had recently asked FERC for both the extension and the lifting of the stop-work order. FERC Commissioner Richard Glick dissented on both approvals.

“[FERC] argues that recommencing construction is somehow better for the environment and landowners, even though both environmental groups and landowners oppose that decision,” wrote Glick in his dissent.

During a recent public comment period on Mountain Valley’s request for the extension, more than 43,000 people had sent FERC their objections, noting among other things that the company had racked up at least 350 environmental violations and $2.26 million in fines in Virginia and West Virginia so far.

In August, North Carolina denied a mandatory water permit for the 73-mile MVP Southgate pipeline, a proposed extension of the Mountain Valley Pipeline. Mountain Valley, the project’s sponsor, filed a petition in the 4th Circuit to overturn the state’s decision. On Oct. 13, several environmental groups including Appalachian Voices filed a motion with the federal court supporting North Carolina’s permit denial.

“North Carolina environmental regulators looked carefully at the Southgate proposal, and saw the dire implications for the water quality of our state that this wholly unnecessary project would bring,” said Appalachian Voices’ Ridge Graham in a statement. “They made the right decision to reject the permit and avoid the risk, and we support that.”