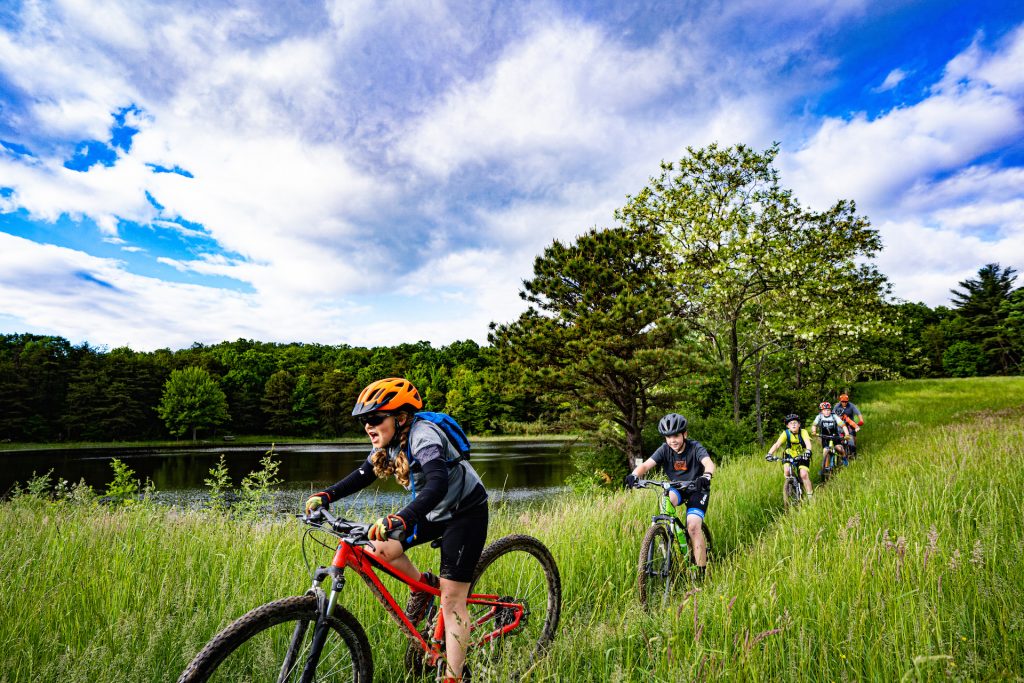 Young riders enjoy the trails at Massanutten Resort in Virginia, built by the Shenandoah Valley Bicycle Coalition. Photo by Mike Miriello of the Downtown Creative

East Coast mountain bikers have long been at the forefront of advocating for public land protections.


“Trail systems introduce people to awesome new natural areas and, in turn, help create a sense of personal investiture and ownership,” says Kyle Lawrence, the executive director of Shenandoah Valley Bicycle Coalition, a group that installs and retools bike trails. That leads to preservation because, “People want to take care of things that mean something to them.”

While getting trails built on public lands is hard enough, doing so on private property is a whole other can of worms. Factors like less acreage, tricky liability laws and potential changes in ownership make installing significant public trail systems risky. Overcoming such challenges requires innovative approaches.

“You’re working harder and having to be more inventive than situations that involve, say, a state park or municipal government,” says Lawrence. “But that’s not to say the effort isn’t worth it, because it absolutely is.”

Below are three ongoing success stories about mountain bike trails on private property that are affected by partnerships between groups such as county officials, resort managers, bike clubs and real estate developers. Though solutions differed, all share a common goal: to create great mountain biking ride spots that conserve forests and help keep the landscape green.

It was 2015, and veteran Morgantown real estate developer Jason Donahue was reading about West Virginia’s Hatfield-McCoy Trails. Formed by a coalition of nine counties in 2000, the 700-plus-mile system caters to ATVs and spans an array of government- and private-owned properties. It attracts upward of 80,000 visitors a year, and a 2014 study placed economic impacts at around $22 million annually.

Donahue wondered if something similar could be done for mountain biking. He envisioned a statewide trail system running north to south through the mountains of eastern West Virginia. It would connect towns, state parks, national forests, large tracts of private property and housing and business developments. It would be made up of cross-country single-track and existing rail-to-trail options — and be open to hikers as well. A dozen or more strategically positioned bike parks would ice the cake.

But commercial land-use restrictions and a lack of liability protections for private property owners made it impossible.

“Given the topography of the region, that seemed like a huge oversight,” says Donahue. In Morgantown alone, “we have numerous [mountainside] developments with 10 to 40 acres of steep slopes and hilly areas. My idea was, ‘Why not hire professional trail-builders and install [bike-park-quality trails] in these areas, keep them green and forested, and turn them into beautiful assets?’”

At the time, Donahue was working on a number of multi-use developments around Morgantown that combined shops, restaurants, upscale apartments, townhomes and subdivisions. He hired consultants to assess one for bike trails. They said it could easily support 12 to 15 miles of premium, park-style mountain biking trails.

“Ever since then, I’ve been pushing investment in trails,” says Donahue. “We’ve put some trails in at a couple of different spots, and it’s definitely been a selling point for new businesses and folks looking to lease or buy homes.”

“No one’s ever done anything like this before,” says Donahue. “The opportunities are vast.”

West Virginia University’s Recreation, Parks and Tourism program has already agreed to help. Director David Smaldone says he hopes to make the system a flagship partnership and allow interns and graduates to gain experience with trail-building and maintenance, ecotourism marketing and more.

By 2018, Donahue had assembled a coalition of bike clubs and shops, state legislators and officials from 10 central and northeastern counties. The group formed the nonprofit Mountaineer Trail Network Recreation Authority and developed proposals for a trail system modeled on the Hatfield-McCoy. Lobbying led to the early 2019 passage of S.B. 317, a law that extends ski resort-style liability protections to private landowners that join the authority.

“Basically, we’ll be leasing the land for these trails and overseeing its use,” says Andy Brozik, who manages Pathfinder of West Virginia, the state’s largest outdoor store, and is a board member with the organization. “Now we can create a bike-packable route that spans the state.”

With much of the proposed system laying on private property, as the effort moves forward, it will open countless acres to public recreation. To date, 10 counties are participating, including Barbour, Grant, Harrison, Marion, Mineral, Monongalia, Preston, Randolph, Taylor and Tucker. Doddridge, Lewis, Ritchie, Upshur and Wood counties are in the process of joining the authority.

In late 2019, the Appalachian Regional Commission awarded a $50,000 POWER grant to the nonprofit organization Friends of the Cheat to fund the creation of the first county-wide comprehensive plan for the Mountaineer Trail Network in Preston County. All other counties in the network will be able to use that plan as a blueprint, according to Beth Warnick of Friends of the Cheat. Funding for installations is, in part, being sought through the federal Abandoned Mine Lands Pilot Program. For instance, Friends of the Cheat was awarded $1 million for a trailhead on the Cheat River Rail-Trail project this past June, which will be recognized as part of the trail network when both are up and running. The group expects the rail-trail will be completed in 2021.

Donahue says that land-use agreements inherent to participation will come in the form of, or work like, conservation easements.

“We’re not going to build trails on somebody’s property just to see them sold out from under us in 20 years, or ruined by clear-cutting,” says Donahue. A major goal of the network is to ensure the properties are protected for generations to come.

The partnership between the Shenandoah Valley Bicycle Coalition and Massanutten Resort began in the early 2000s. The resort granted the fledgling group access to 800 acres of undeveloped west-facing mountainside; member-volunteers would crisscross its forests, creeks and ravines with mountain biking trails. 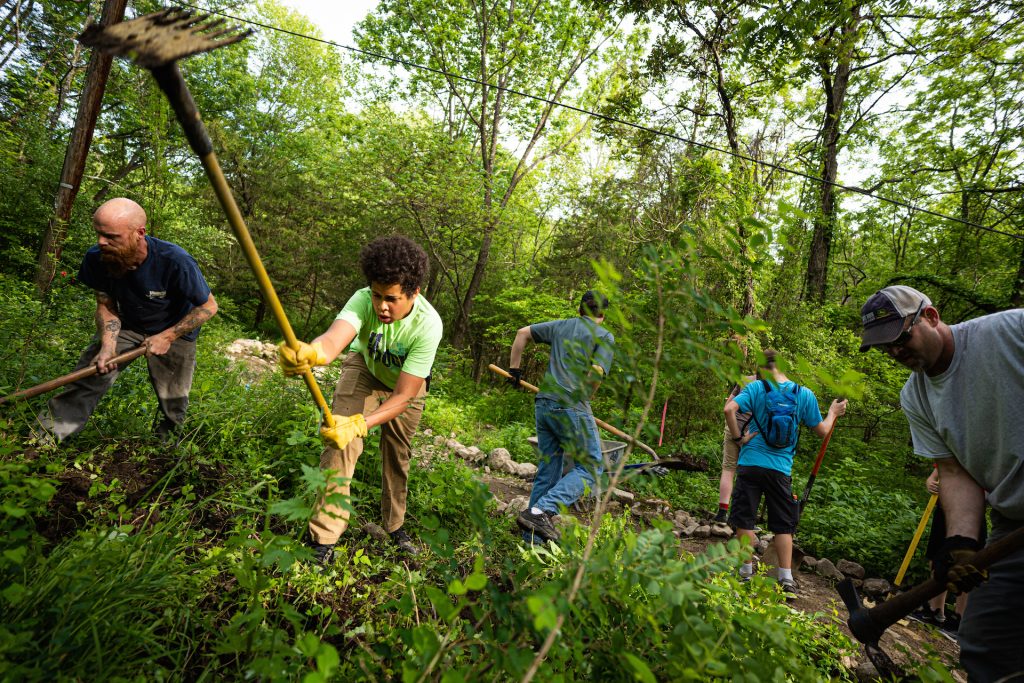 “Back then, a hunt club leased the area during winters, but that was it,” says Kyle Lawrence, executive director of the coalition, which now has about 1,200 members and has worked on hundreds of miles of bike trails. The resort had focused development on the mountain’s eastern side since the 1970s. Aside from an old mile-long service road to the 2,923-foot summit, the western area was essentially pristine.

Even better, it sat just eight miles from downtown Harrisonburg.

“It was a dream scenario,” says Lawrence. The service road would serve as a shuttle route to trailheads and connect resort riders to the property. “The only stricture was that we use sustainable methods — which is what we’d already proposed doing. So, we more-or-less had free reign to experiment. That freedom resulted in the region’s first purpose-built mountain biking trails.”

Known as the Western Slope, the area now boasts more than 30 miles of trails. Its popularity helped Harrisonburg become an International Mountain Biking Association bronze-level Ride Center in 2011 — and swell the coalition’s ranks to more than 950 members. Usage inspired Massanutten Resort to install a 10-mile, lift-assisted bike park by the ski slopes in 2016.

To date, volunteers have spent tens of thousands of hours installing an estimated $500,000 worth of trails. The group’s most ambitious route to date, the mile-long black-diamond “Puzzler,” opened in fall 2019. Further additions are already planned.

There’s just one problem: parts of the Western Slope are technically slated to be used for future housing developments. But Lawrence says the trails — and the thousands of visitors they attract each year — inspired the resort to change their plans.

“Massanutten has now incorporated Western Slope into its official marketing materials and sees it as a major asset,” says Lawrence. While legal agreements are currently being discussed, resort management has assured the bicycle coalition that they will focus development on the opposite side of the mountain for the foreseeable future.

In other words, the grassroots bike system is helping to ensure that 700-plus acres of beautiful mountainside forest is not transformed into subdivisions. 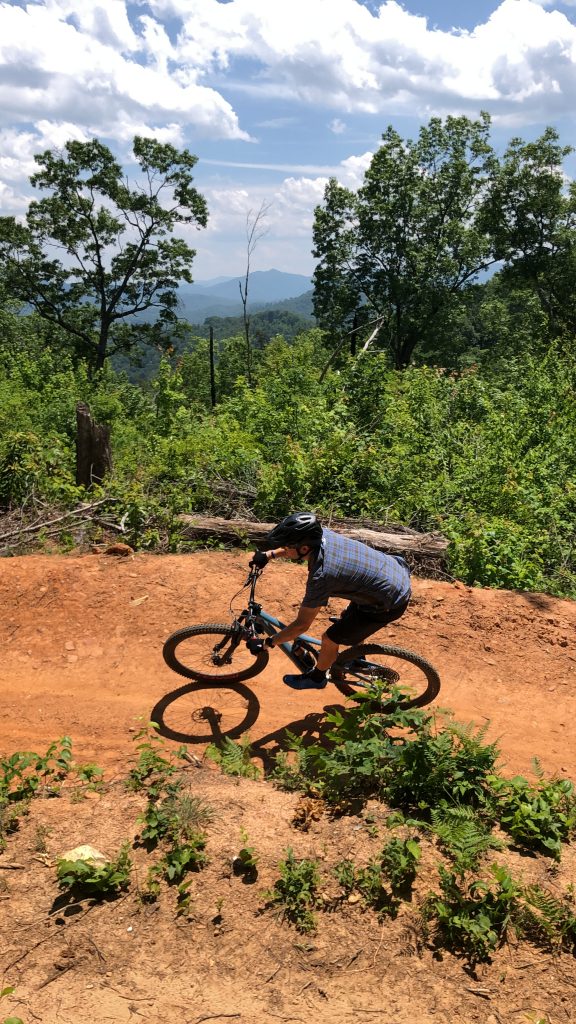 A rider rounds a bend at Fire Mountain in Cherokee, N.C. Photo by Andy Williamson

Before COVID-19, Principal Chief Richard Sneed said the parking lot of the Eastern Band of Cherokee Indians’ Fire Mountain Bike Park essentially stayed packed with mountain bikers. Visits rivaled that of neighboring Oconaluftee Indian Village living history museum, one of the Qualla Boundary’s top tourism draws. When the pandemic ends, he has no doubts that will again be the case.

“When we built Fire Mountain three years ago, some worried it wouldn’t bring a return on investment,” says the tribe’s Secretary of Operations Jeremy Hyatt. Ten-and-a-half miles of machine-built trails brought a price tag of $250,000 — and riding was free. The primary goal was lowering rates of diabetes and obesity among tribal residents. Second was piloting ecotourism as a viable alternative to the casino-dominated economy.

“We had big crowds [from the] moment we opened,” Hyatt says. Visitors came from all over to ride Fire Mountain. “And once they’ve been here, many come back with their friends and families.”

On a fall day in 2019, there were riders from South Carolina, Georgia, West Virginia and Virginia, as well as from North Carolina towns like Bryson City, Sylva, Boone and Asheville. Most had visited multiple times and touted the spot to other enthusiasts. By Hyatt’s estimate, Fire Mountain brought thousands of visitors to Cherokee in 2019. Though an economic study has yet to be completed, Sneed called related economic impacts “profound.”

Multiple new businesses opened or expanded following the success of Fire Mountain. An outdoor store and bike shop launched in 2018. A gourmet cafe added more smoothies and an area devoted to regional craft beers and wines. The Qualla Boundary’s first craft brewery plans to open this fall or early 2021, depending on the state of the pandemic.

“People who are coming here for Fire Mountain are finding other things to do outside like fishing and tubing and hiking,” says Hyatt. He adds that Fire Mountain has brought significant business to hotels and restaurants. And entrepreneurs reacted accordingly. River outfitters have added or are considering adding further kayaking and tubing options. Hotels were renovated. A pizza parlor expanded beer menus and added further seating outdoors. New bike racks appeared near some businesses and cultural attractions. 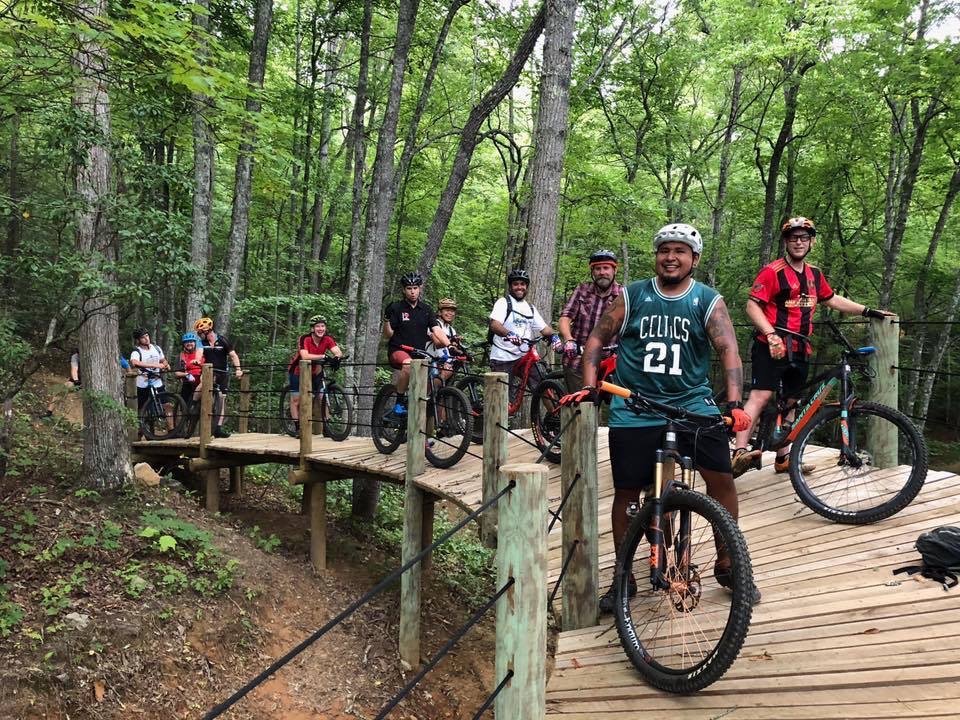 A group of bikers pause for a photo on one of the wooden features at Fire Mountain. Photo by Ed Sutton

Fire Mountain’s success inspired tribal leaders to do more. In 2019, they spent $100,000 adding wooden features to the trail system along with two summit gazebos. At that point, another $50,000 was allotted for one mile of new trail that features more progression for beginner riders, and a reworking of an unused trail that includes wooden drops, gaps and banked curves. The tribe is partnering with the International Mountain Bicycling Association for a feasibility study to search for new properties that could expand mountain biking trail access, connectivity and facilities.

“We see mountain biking as playing a major role in Cherokee’s future,” says Hyatt. “Our goal is to become the most attractive non-resort ride center in the region.”

According to Sneed, the project’s most attractive element is “how it inherently promotes a healthy outdoor lifestyle and an ethos of stewardship and conservation that are traditionally very Cherokee.”

“These are beautiful, heavily forested properties, and they’re being preserved through use,” he continues. In areas where officials once debated installing subdivisions, “we’re now talking about hiking and biking trails.”

Sneed said mountain biking’s success as a tourism driver has helped convince residents that the area’s natural beauty is its biggest asset and should be protected.

“To me, it’s like a tipping point,” says Hyatt. “That thinking is going to keep growing and exerting greater influence on how decisions get made in the future.” 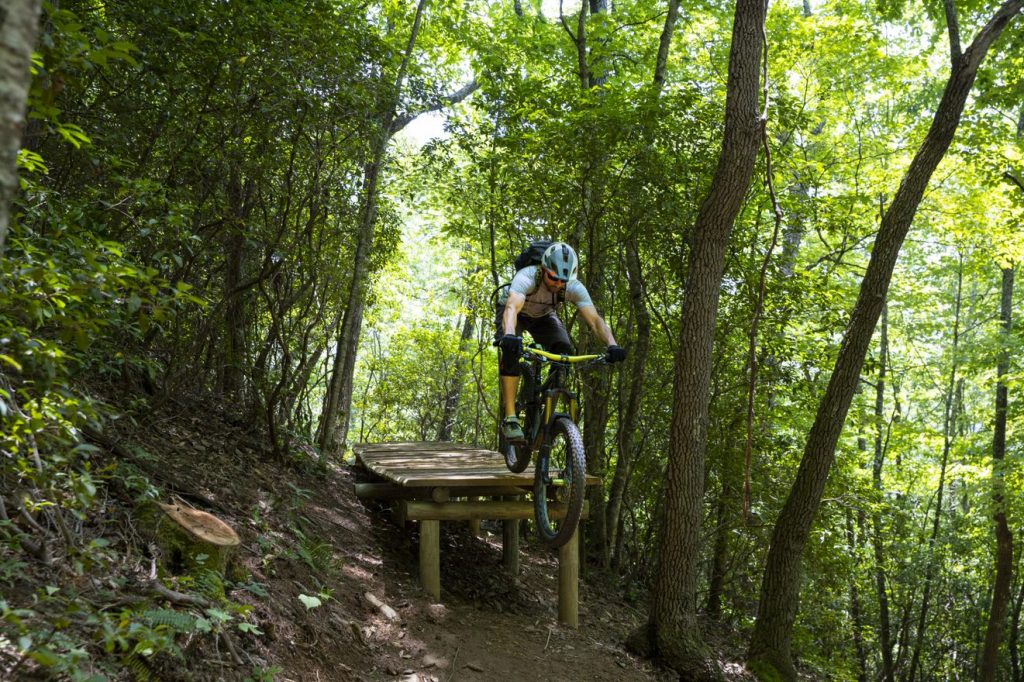