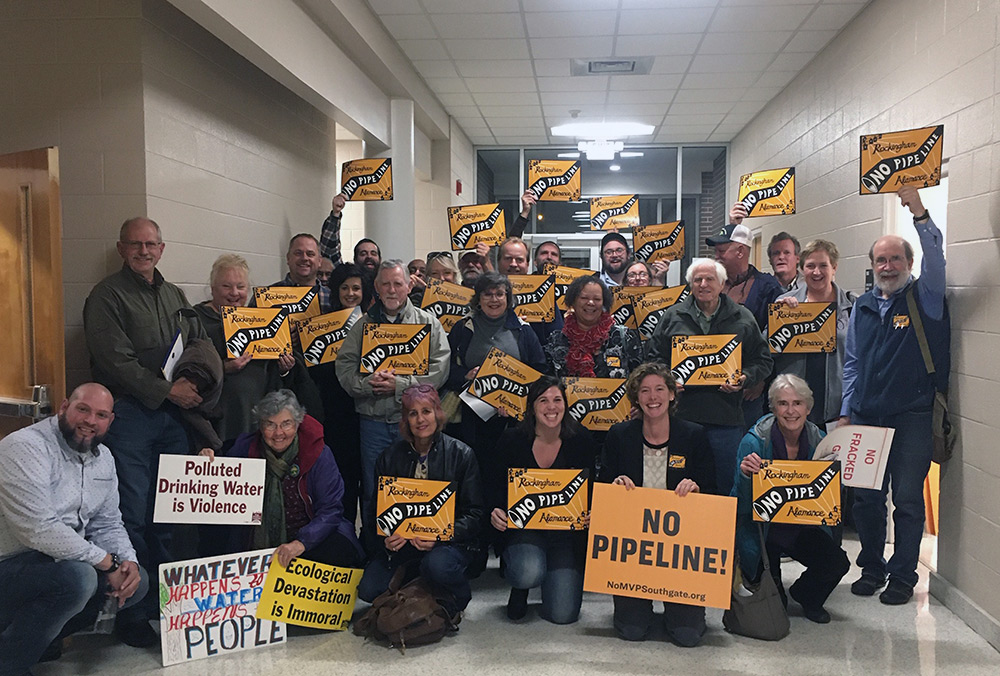 On Nov. 19, the DEQ heard from landowners and concerned residents during a public hearing in Rockingham County, N.C., about a water quality permit for the proposed MVP Southgate extension. The project would lengthen the unfinished 303-mile fracked-gas Mountain Valley Pipeline by another 73 miles from Pittsylvania County, Va., into North Carolina’s Rockingham and Alamance counties, and would require a new compressor station to be built at the Virginia starting point.

The DEQ required this public hearing after putting MVP Southgate on hold and requesting additional information in September. The North Carolina agency was among the thousands of individuals and organizations who submitted comments critical of the Federal Energy Regulatory Commission’s draft environmental impact statement for the project.

In late November, FERC delayed the projected release of their final MVP Southgate environmental impact statement from December 2019 to Feb. 14, 2020.
More than 50 people came to the Nov. 19 meeting and 17 gave prepared statements against the pipeline. The vast majority opposed the fracked-gas project.

“My family has been farming this land for over eight generations and it’s shameful that polluting corporations can take control of it to line their pockets,” said Perry Slade, a farmer in Alamance County, N.C., whose farm is in the pipeline’s proposed route. “The fracked-gas Mountain Valley Pipeline is dirty, dangerous and a threat to my life and livelihood that isn’t even needed.”

Ramona Bankston, a landowner in Rockingham County, N.C., who would be impacted by the project, also spoke.

“I just want my land to be safe, I want everyone in Rockingham County, Alamance County and everywhere else to be safe and not to have to bear the bulk of the devastation that we’re seeing behind this project,” said Bankston.

The N.C. DEQ is accepting written public comment at PublicComments@ncdenr.gov on the water quality permit until Dec. 20. Commenters should list “MVP Southgate” in the email’s subject line.

On Nov. 16, dozens of North Carolinians held a “March for Justice” in Robeson County to protest a proposed liquefied natural gas facility. Duke Energy subsidiary Piedmont Natural Gas plans to build the structure within one mile of an elementary school that is 95 percent students of color, primarily Native American.

More than 40 people joined the “March for Justice” on Nov. 16 in Robeson County, N.C., in protest of a proposed Piedmont Natural Gas liquefied natural gas facility. Photo by Ridge Graham

Piedmont states that the facility is needed to meet customer demands during times of high usage. The facility would be a source of hazardous air pollutants like benzene.

In April 2019, Piedmont withdrew the liquid natural gas facility’s air quality permit application to the DEQ, citing a regulatory exception for gas-powered heaters. The company does not need a water quality permit for the facility, despite its location on land that regularly floods and that is situated between two tributaries of the Lumbee River, a nationally designated “Wild and Scenic River” that is integral to the Lumbee Tribe of North Carolina. It is also the drinking water source for thousands of people.

Piedmont has a poor environmental track record with such projects. Under state orders, the company dug up contaminated soil from 2008 to 2018 at its liquefied natural gas facility in Huntersville, N.C. The groundwater is still contaminated at that location.

Robeson County is also the projected terminus for the 600-mile Atlantic Coast Pipeline. The Piedmont liquefied natural gas facility would be independent from this pipeline.

Piedmont also wants to build two side-by-side 5-mile long pipelines connecting the facility to existing infrastructure. The pipelines would cross wetlands and waterbodies and impact several families along the route. Piedmont has applied to the N.C. Department of Environmental Quality for a water quality permit.

After the march, citizens held a “Celebration of Our Sacred Lands and Waters” at Oxendine Elementary School. More than 20 organizations including Appalachian Voices, the environmental organization that publishes this newspaper, co-sponsored the event, and more than 100 people came from across the state to hear local organizers and landowners who live along the route of the proposed pipelines speak about the impacts to the nearby community.