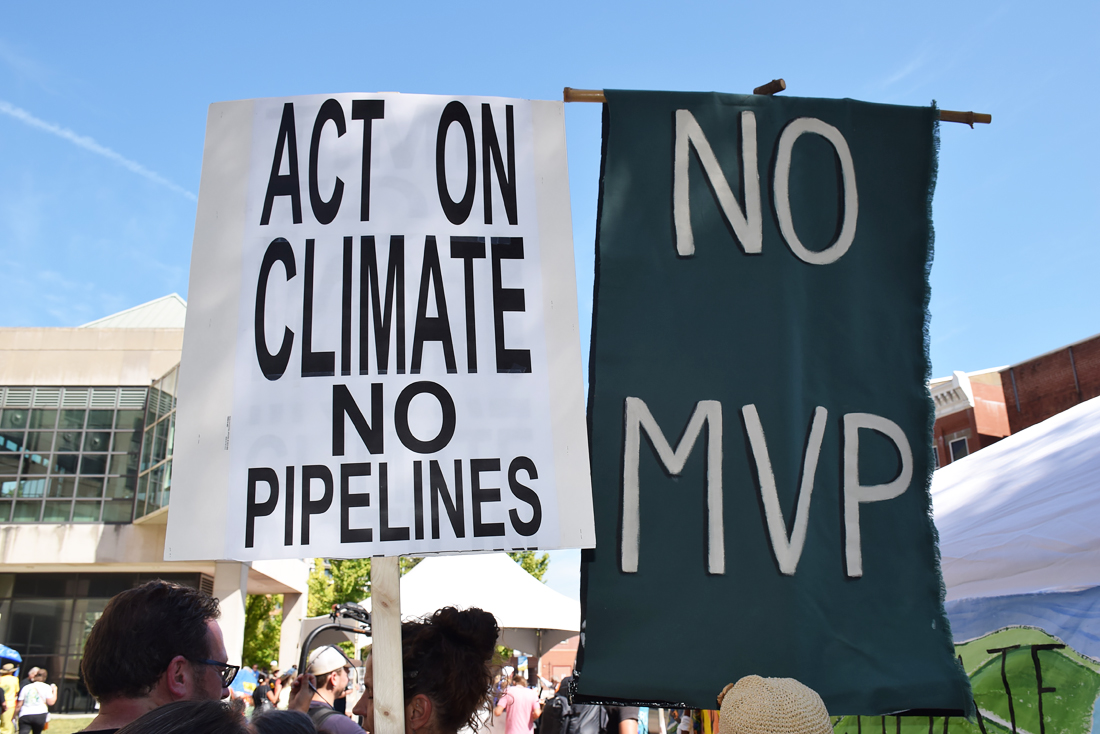 While the Mountain Valley Pipeline’s environmental problems continue to stack up, developers are pushing forward on their plans to extend the unfinished 303-mile pipeline by another 73 miles from Pittsylvania County, Va., into North Carolina’s Rockingham and Alamance counties. The proposed extension, called MVP Southgate, would also require a new compressor station to be built at the Virginia starting point.

In August, MVP Southgate developers sued five Alamance County landowners to gain access to their land for surveying. In total, the pipeline company has petitioned 12 residents of Alamance and Rockingham counties for land access. Hearings on four of the five new cases were scheduled to be held on Sept. 30, and Mountain Valley withdrew the fifth suit. A judge has so far granted access to three of the 12 properties, according to the Times-News.

The regulatory process for the potential new pipeline entered a new stage when the Federal Energy Regulatory Commission released their draft environmental impact statement for MVP Southgate in August. The public comment period closed on Sept. 16. Environmental nonprofit organization Appalachian Voices, the publisher of this newspaper, submitted a letter to FERC citing numerous water quality violations from Mountain Valley developers and stating that the pipeline would only benefit private companies and that an economic analysis shows it is not needed.

Members of Native American tribes in North Carolina have also spoken out.

“The proposed Mountain Valley Pipeline Southgate extension and construction through the northern part of Alamance County would destroy any remaining Native artifacts, burial mounds and ancestors left there,” wrote Crystal Cavalier Keck of the Occaneechi band of the Saponi Nation in a Sept. 15 Times-News op-ed.

The thousands of people who voiced their opposition to the project were joined by the North Carolina Department of Environmental Quality. The agency submitted a scathing rebuke of the pipeline in response to the draft environmental impact statement, writing that MVP Southgate is unnecessary and that FERC did not properly analyze clean energy alternatives to the fracked-gas project. The agency put MVP Southgate’s application on hold on Sept. 23, stating that additional information was required and that a public hearing must be held before Dec. 22.

The U.S. Fish and Wildlife Service also raised concerns with the environmental analysis. In a Sept. 16 letter to FERC, Fish and Wildlife stated that there was not enough information provided for FERC or other agencies to make an informed decision.

FERC plans to issue a final environmental impact statement for the proposed pipeline in December. 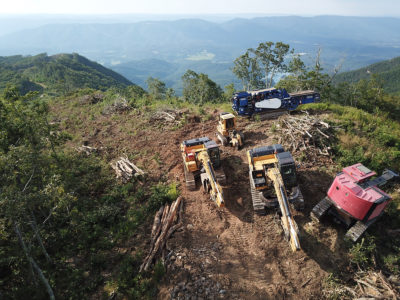 Work continues along much of the Mountain Valley Pipeline’s route, but legal challenges currently prevent construction at water crossings and national forests.

On Aug. 28, FERC ordered the U.S. Fish and Wildlife Service to review a permit allowing Mountain Valley Pipeline developers to harm threatened and endangered species in its path. This follows an Aug. 12 petition to the Fish and Wildlife Service from several environmental groups, including Appalachian Voices, asking the agency to reverse and review the permit. On Aug. 15, Mountain Valley voluntarily suspended certain construction activities in areas where work could harm threatened and endangered species.

The groups also requested that the agency suspend the permits during litigation, which the agency denied, citing Mountain Valley’s voluntary suspension. The organizations stated that a voluntary suspension is not enough, observing that construction has been reported to continue. On Aug. 21, the groups filed a motion with a federal court to suspend the permit while litigation is pending.

“The Fish and Wildlife Service’s original biological opinion was wholly inadequate to protect imperiled species in the path of the Mountain Valley Pipeline,” said Jason Rylander with Defenders for Wildlife, one of the seven groups involved in the suit. “Further construction on the pipeline must cease while the Service conducts this necessary review of its impacts.”

In July, Amy Blough, the widow of a Mountain Valley contractor who was killed by a falling tree in March 2018, sued pipeline developers for failing to provide a safe work environment. She states in the lawsuit that the companies did not mark dangerous trees and allowed workers to use manual tree-felling equipment instead of waiting for permits to use heavy equipment in order to meet a tight March 31 tree-felling deadline, according to the Pennsylvania Record.

Construction on the Atlantic Coast Pipeline has been stalled for months due to ongoing court challenges. A legal battle over whether the pipeline can cross the Appalachian National Scenic Trail on federal land was unresolved at press time.

The U.S. Fourth Circuit Court of Appeals stopped construction across the trail in the George Washington National Forest and in the Monongahela National Forest in December. The federal appeals court ruled that the agency had violated two laws and did not have authority to give Atlantic Coast developers a right-of-way.

On Oct. 4, the Supreme Court announced it would hear the case. No date for oral argument had been set at press time.

Meanwhile, pipeline opponents are calling on Congress to resist any attempts by Atlantic Coast developers to pass language into law that would allow them to cross the Appalachian Trail on federal land.

On Aug. 13, two environmental groups petitioned the North Carolina Department of Environmental Quality to cancel a key water permit for the Atlantic Coast Pipeline. North Carolina Climate Solutions Coalition and Friends of the Earth argue that the department lacked information on the pipeline’s potential expansion into South Carolina at the time of the permit’s approval.

Additionally, the groups stated that nine additional natural gas projects are planned near the Atlantic Coast Pipeline’s terminus in Robeson County, N.C. — a far cry from the two projects disclosed in the pipeline’s original permit application. County residents are resisting a proposed liquid natural gas facility along with two supplemental pipelines that Duke Energy and Piedmont Natural Gas plan to build as connectors to existing infrastructure, according to Appalachian Voices’ Ridge Graham.

Sept. 5 marked the one-year anniversary of the Yellow Finch tree-sit in the path of the Mountain Valley Pipeline in Elliston, Va. Over the last 365-plus days, multiple individuals have occupied two suspended platforms while tree-felling and other construction activities took place around them. A support camp on the ground has helped to document and keep watch over the tree-sitters.

“This blockade is worthwhile not only because it is effective, but because it offers us the opportunity to recognize and grow our power both as individuals and as a community,” wrote representatives of the tree-sit in a Sept. 5 post on the Appalachians Against Pipelines Facebook page.

On Sept. 16, a judge dismissed assault charges filed by a Mountain Valley security contractor against protester Jammie Hale after watching a video of the incident in which Hale pointed his cane at a security guard.

Additional demonstrations continue to spring up along the pipeline’s route. On Oct. 7, a protestor known as “Squirrel” locked themselves to a grounded Mountain Valley Pipeline helicopter near Elliston, Va. They were extracted and arrested after five hours and charged with three felonies and four misdemeanors with a bail of $15,000, according to Appalachians Against Pipelines. Donations to the pipeline protest group were used to bail Squirrel out of jail on Oct. 10.

On Sept. 27, 75-year-old grandmother Duff Benjamin locked herself to construction equipment in Montgomery County, Va., and stopped work for five hours before being arrested and meeting bail. Over two September days in Greenbrier County, W.Va., five protesters were arrested after locking themselves to construction equipment and stopping work for hours, according to Appalachians Against Pipelines. All met bail.

On Aug. 29, two demonstrators locked themselves to equipment and stopped work in Greenbrier County for approximately two hours before being removed, cited for trespassing and released by law enforcement.

On Aug. 15, two protesters locked themselves to Mountain Valley Pipeline construction equipment and halted work for more than six hours. Both were charged with two misdemeanors, and one, a white woman, was released after meeting bail, according to Appalachians Against Pipelines. The other, a transgender man of color, was held without bail for several days before being released.

Editor’s Note: This story was updated from a previous version on Oct. 18, 2019, to include new information.

Editor’s Note: This story was updated from a previous version on Oct. 14, 2019, to include new information.

Editor’s Note: This story was updated from the print version on Oct. 11, 2019, to include new information.