TVA Refuses to Excavate One Coal Ash Pit, Will Dig Up Another 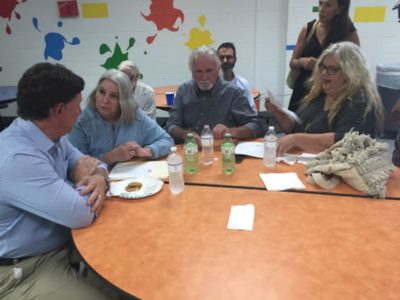 On July 2, the Tennessee Valley Authority announced that they would not excavate 5 million tons of coal ash in an unlined pit at their Bull Run Fossil Plant next to the Clinch River in Anderson County, Tenn. Instead, the monopoly utility plans to drain water out of the pit and cover the top.

Environmental groups represented by the Southern Environmental Law Center, a nonprofit law firm, are calling for TVA to excavate the coal ash.

TVA revealed earlier this year that they would shutter Bull Run by 2023. Testing conducted by the utility from 2000 to 2014 showed levels of arsenic up to three times the legal limit in groundwater near the Bull Run plant, according to the Knoxville News-Sentinel. However, the utility stated that the coal ash will not endanger public drinking water since it is treated by the city and there are no residential wells downstream. TVA is expected to release the latest groundwater testing results in August.

In the meantime, community members near Bull Run are holding meetings on what to do next about coal ash and voicing their concerns about the plant’s closure. TVA also held several meetings with the community in late July. Several environmental groups including the Sierra Club, Statewide Organizing for Community eMpowerment, and Appalachian Voices — the publisher of this newspaper — are supporting the gatherings.

Also attending the Bull Run meetings are workers who helped clean up TVA’s massive 2008 Kingston coal ash spill and their relatives. A federal court ruled in November that Jacobs Engineering, the TVA contractor hired to clean up the spill, failed to provide proper worker safety measures. At least 40 of those workers have died and more than 400 have been sickened from coal ash-related toxins, according to an ongoing Knoxville News Sentinel investigation.

Elected officials representing Roane County, Kingston and Harriman are suing TVA and Jacobs for misleading them and the public about the toxicity of the 7.3 million tons of coal ash that spilled from a busted dike at the Kingston plant in Roane County in December 2008. The public officials allege TVA and Jacobs also hid internal records proving its toxicity, destroyed evidence and tampered with threat level testing.

In June, the Tennessee Valley Authority agreed to fully excavate 12 million tons of coal ash from an unlined pit at the Gallatin Fossil Plant northeast of Nashville. This resulted from a lawsuit against the monopoly utility that state regulators filed in 2015 based on allegations that coal ash pollutants were leaching into the Cumberland River, a source of drinking water for Nashville, Tenn., and the surrounding area.

TVA can either recycle the Gallatin coal ash into concrete or place it in a lined landfill within 20 years. The June decision comes three months after TVA agreed to excavate 5 million tons of coal ash from its Allen Fossil Plant near Memphis, Tenn.