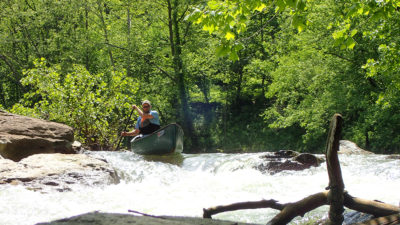 Adam Wells of Appalachian Voices runs a rapid on the Clinch River. Photo by Chelsea Barnes

Clinch River
Location: The Clinch River forms in Tazewell County, Va., flowing unfettered through Southwest Virginia on its way to Tennessee, where it encounters two dams before joining the Tennessee River.
How to access: The Virginia section of the Clinch hosts numerous launch and take-out sites. Review a map and mileage information at clinchriverva.com.
Difficulty: The river is mostly gently flowing and Class I, welcoming to beginners, anglers and families. But boaters should be aware of the location of several Class II and III rapids. Paddlers can opt to portage around these rapids or choose calmer sections.
Fun Facts: The Clinch is a widely acclaimed biodiversity hotspot, partially due to a lack of dams on the Virginia portion. Its waters are home to roughly 50 species of mussels — including many that are at-risk or endangered — along with a range of darters, minnows and sport fish.
Local Champion: The Clinch River Valley Initiative, a network of local community advocates, promotes tourism by highlighting recreational opportunities along the river and in nearby towns.
More info: Plan your Clinch adventure — and your off-river explorations — at clinchriverva.com and visitclinchriver.com. Both sites include contact information for Clinch River guide and boat rental services. — Molly Moore 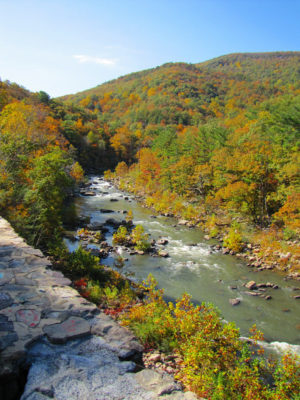 Maury River
Location: The Maury River is near Buena Vista, Va., approximately an hour’s drive northeast of Roanoke, Va.
How to access: A large parking area serves the first and most difficult stretch, Goshen Pass. Less experienced paddlers can put in further down the river. Detailed directions are on the American Whitewater website.
Difficulty: The first five miles of the river, known as Goshen Pass, are only recommended to more experienced paddlers. This stretch is tricky to navigate safely and its rapids rank between Class III to IV. Below Goshen Pass, the water varies from Class I to III and is considered a good run for those training to paddle whitewater.
Fun Facts: The river was named after Matthew Fontaine Maury, a professor at the Virginia Military Institute who fell in love with the river. Following Maury’s death, his remains were carried through Goshen Pass and on to Richmond for burial. The river also parallels the Chessie Nature Trail.
Local Champion: The Atlantic Coast Pipeline would disturb the headwaters of the Maury River (read more on page 8). Grassroots group Preserve Rockbridge is working to prevent the construction of the Atlantic Coast and Mountain Valley pipelines, as is the Rockbridge Conservation Council, which also monitors water quality on the Maury.
More info: The Virginia Department of Game and Inland Fisheries works on stream restoration and other conservation projects, and is working to remove a damaged dam on the Maury that blocks fish movements. The department offers an extensive river description as well as biology reports and current regulations. Check it out at dgif.virginia.gov/waterbody/maury-river. — Sam Kepple