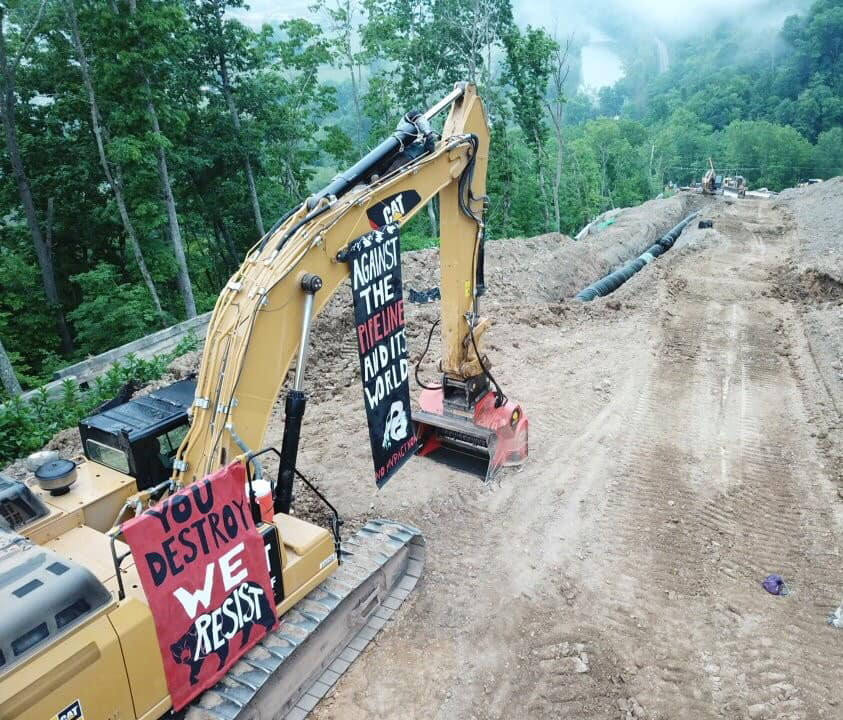 A pipeline protester hung banners from and locked themselves to equipment before being forced down by weather. Photos courtesy of Appalachians Against Pipelines

In West Virginia, two non-violent Mountain Valley Pipeline protesters have been arrested and charged with felony threats of terrorist acts and other crimes as of late May. The two are Holden Dometrius, who chained himself to construction equipment in Monroe County on April 30, and Jeremy Edwards, who blockaded himself inside a section of the 42-inch fracked-gas pipeline in Summers County on May 6. Edwards was charged with an additional felony for threat of property destruction. Both he and Dometrius met bail. 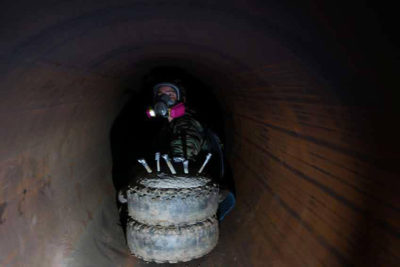 Jeremy Edwards, above, was charged with threats of terrorist acts, a felony, for blockading the inside of a pipeline section in May. Photos courtesy of Appalachians Against Pipelines

Previously, Mountain Valley protesters have been charged with misdemeanors. A spokesperson for Appalachians Against Pipelines, a group that represents protesters and raises funds to help with legal fees, stated that the felony charges are being used as intimidation.

“The state and MVP have seen how the misdemeanor charges and sentences police and prosecutors had been imposing failed to stop pipeline fighters from putting their bodies in the way of construction,” wrote the spokesperson in an email.

The Appalachians Against Pipelines spokesperson states that the felony charges have not affected their resolve.

“The range of tactics the state is using against us has shifted; the urgency of fighting back against the expansion of fracked gas infrastructure has only intensified,” they wrote.

According to Emily Satterwhite, director of Appalachian studies at Virginia Tech, it is not new for state and federal governments to use the law to put corporations before people in the region, citing conflicts between coal companies and unionizing miners in the early 20th century. Satterwhite chained herself to Mountain Valley construction equipment in Montgomery County, Va., in June 2018, and was sentenced to 200 hours of community service.

In Elliston, Va., protesters have occupied trees in the path of the Mountain Valley Pipeline for more than eight months. On May 18, Southwest Virginia grandmother Crystal Mello ascended a tree to join the tree-sit, which was ongoing as of press time in late May. On May 13, pipeline developers asked a federal judge to forcibly extract the protesters before the end of the month.

Mountain Valley Pipeline, LLC, stated in the court document that they would have to bring another tree-cutting crew back in August if they are unable to fell the trees by June, which would cost the company approximately $22,000.

Read about the latest legal disputes and pipeline coating safety concerns in our June/July issue.