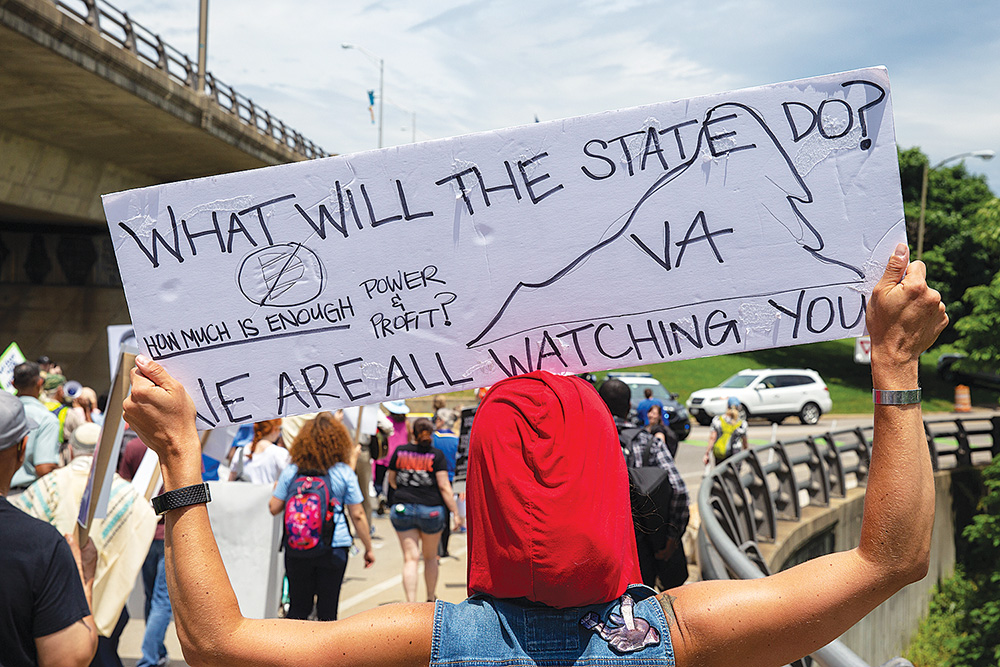 On May 17, activists in Richmond, Va., marched against fracked-gas pipelines in the state and an Atlantic Coast Pipeline compressor station in Union Hill, Va. Photo by Parker Michels-Boyce

Construction is underway along most of the Mountain Valley Pipeline’s route, but legal challenges currently prevent work at water crossings and national forests. Work on the Atlantic Coast Pipeline remains stalled due to numerous similar lawsuits. As time stretches on, unlaid sections of pipe sit exposed to the elements — which can degrade a special coating on the outside of the pipe meant to reduce the risk of corrosion and explosions.

Bill Limpert, a retired Maryland environmental regulator, argues that the pipe’s exposure to sun has damaged the coating. Limpert lives in the path of the Atlantic Coast Pipeline in Bath County, Va. 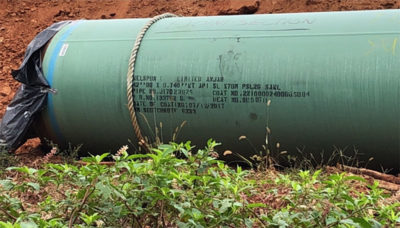 Labeling on this Mountain Valley Pipeline section shows that protective coating was applied in July 2017, 15 months before this photo was taken. Photo: NRDC

“The ACP admits that the pipes have been stored longer than the manufacturer’s recommendation,” wrote Limpert in an April op-ed published in multiple news outlets. “Experts advise me the pipes may be safe for up to two years, but their safety is questionable thereafter. The ACP pipes have already been stored outside for three years and counting, since the ACP is now on hold. The MVP has testified in court that they are concerned about [fusion-bonded epoxy coating] loss as well.”

Aboveground storage of coated pipe for more than six months without extra sun protection is “not recommended,” according to the National Association of Pipe Coating Applicators, an industry trade group.

The coating also contains benzene and other hazardous chemicals. In a March 21 letter to the Federal Energy Regulatory Commission, the Virginia State Health commissioner and the director of the Virginia Department of Environmental Quality expressed concern about the chemicals in this coating leaching into groundwater after the pipe’s prolonged exposure to sunlight.

The two agencies stated that they had received numerous notes of concern from residents, and informed FERC that they would like to investigate the coating’s safety and any environmental risks it may pose as the agencies have not identified any so far.

One attempts to make it more difficult for states to use the Clean Water Act to halt pipelines — just this May, New York Gov. Andrew Cuomo’s administration denied a permit for a 24-mile natural gas pipeline. The other would give Trump the authority to approve international pipelines, instead of the secretary of state, for transnational projects such as the Keystone XL oil pipeline.

“Today’s executive orders are just another attempt by Donald Trump to give corporate polluters a free pass to pollute our water and put our health at risk,” said Sierra Club Executive Director Michael Brune in an April 10 press release vowing to fight the orders. “This attempt strips communities of their ability to act in the public’s interest and address the pollution of their waterways.”

House Energy and Commerce Committee Chairman Frank Pallone told InsideClimate News that he vows to “fight this tooth and nail.”

The proposed project would run through Virginia’s Pittsylvania County and North Carolina’s Alamance and Rockingham counties. FERC plans to release a final environmental study by December and decide whether to approve the fracked-gas pipeline by March 2020.

Visit appvoices.org/take-action in July for information on how to submit a public comment.

On the state level, the West Virginia Department of Environmental Protection is attempting to modify around 50 regulations that have impeded the Mountain Valley Pipeline. One change would remove a 72-hour time restriction for pipeline construction through waterways, which environmental groups including Appalachian Voices — the publisher of this newspaper — have used to halt Mountain Valley construction at water bodies.

“In other words, when the WVDEP was ‘called out’ in 2018 for having approved a pipeline construction plan that violated their own regulations regarding river crossings, their response was to rewrite the rules to allow construction to continue,” said pipeline resistance group Appalachians Against Pipelines in a statement.

On April 19, the Virginia DEP fined Mountain Valley developers $266,000 for multiple environmental violations committed during construction since April 2018. Pipeline developer EQM Midstream Partners reported that regulatory challenges make it unlikely for Mountain Valley construction to be finished by the end of 2019.

Mountain Valley utilized slipshod construction practices throughout 2018, Virginia Tech Director of Appalachian Studies Emily Satterwhite alleges in an April 2019 Virginia Mercury op-ed. She states that pipeline developers admitted to FERC in May 2018 that its plans for stream crossings were insufficient, according to a Freedom of Information Act inquiry requested by the grassroots group Indian Creek Watershed Association.

“FERC Senior Consultant Lavinia DiSanto directed MVP to provide a ‘site specific scenario … for each location that would receive mitigation,’” wrote Satterwhite in the op-ed. “MVP Design Engineer Ricky Myers dismissed DiSanto’s directive as ‘excessive’ and insisted that MVP would abide by its own newly revised rule: they would build as they saw fit and then consult with a monitor after construction.”

In April, West Virginia regulators fined developers of the 26-mile WB Xpress Pipeline $13,340 for water quality violations at the North Fork of the South Branch of the Potomac River. A failed dam allowed sediment pollution to spread 19 miles downstream, and developer Columbia Gas Transmission did not properly report the spill.

“For a 900 million-dollar project, the $13,340 penalty is pocket change considering the size of the violator,” read a public comment from Angie Rosser of the West Virginia Rivers Coalition, an environmental nonprofit organization, in response to the fine. “With more multi-billion-dollar pipeline construction projects underway, these companies need to see that violations come with hefty consequences.”

In September 2018, FERC granted Mountain Valley a variance allowing developers to bury pipe more shallowly in streambanks. Satterwhite writes that FOIA documents indicated that neither pipeline developers nor FERC informed state regulatory agencies about the variance before it was granted. She calls for the state to issue a stop-work order until the effects of the variance can be assessed through a supplemental environmental impact statement that includes a stream-by-stream analysis.

On May 1, several environmental groups including Appalachian Voices and the Sierra Club alerted the U.S. Fish and Wildlife Service of new information regarding endangered species that may be affected by Mountain Valley construction, the Roanoke Times reports.

The organizations cite heavy sediment pollution resulting from construction so far, and asked the agency to revisit its 2017 determination that an insignificant amount of endangered species would be harmed. A Sierra Club spokesperson told the publication that they may pursue a lawsuit if the agency does not.

On May 18, crowds of activists gathered in Virginia Attorney General Mark Herring’s hometown of Leesburg, Va., to urge him to pursue a work stoppage on the Mountain Valley Pipeline while an environmental enforcement case he filed in December against developers for hundreds of violations is under review. They also called on Herring to affirm the State Water Control Board’s authority to revoke a Clean Water Act certification. At a public hearing in March, the board had made vague claims that they lacked the ability to rescind the certificate.

Facing mounting delays on the Atlantic Coast Pipeline, lead developer Dominion Energy is pressuring Congress to consider legislation to expedite permits for the pipeline to cross the Appalachian Trail, two national forests and the Blue Ridge Parkway. In response, 52 environmental organizations including Appalachian Voices and the nonprofit law firm Southern Environmental Law Center sent a letter to Virginia’s U.S. senators imploring them to oppose any such legislation.

“Dominion’s permitting problems for the Atlantic Coast Pipeline are entirely self-inflicted—it never made sense to force this project through a national park, two national forests, and some of the steepest mountains in Virginia,” wrote Southern Environmental Law Center Senior Attorney Greg Buppert.

In February, the U.S. Fourth Circuit Court of Appeals denied Dominion’s request for a rehearing on the December denial of a U.S. Forest Service permit that would have allowed the pipeline to cross the George Washington and Monongahela National Forests.

Dominion now hopes to take its argument to the U.S. Supreme Court. If the court grants review, it likely would hear the case in 2020, Seeking Alpha reports.

In May, Dominion and the U.S. Forest Service asked the Supreme Court to extend the deadline for an appeal to June 25, which the court approved, WMRA reports.

U.S. Attorney General William Barr, a Dominion board member for 10 years, held $2.8 million in the company’s stock as of December 2018, according to nonprofit organization Clean Virginia.

On May 4, the Southern Environmental Law Center appealed a reissued permit from the Fish and Wildlife Service for the Atlantic Coast Pipeline that would allow developers to cut through endangered species’ habitat. Representing several environmental groups, the nonprofit law firm argued to the Fourth Circuit that the permit did not fully account for the pipeline’s effects on the endangered rusty-patched bumblebee and other species. A decision on the case is expected by August.

On April 12, the City of Staunton, Va., and Nelson County, Va., filed a joint friend-of-the-court brief to the U.S. Court of Appeals for the District of Columbia opposing the Atlantic Coast Pipeline. Staunton raised concerns about the pipeline polluting the city’s water supply, and Nelson County officials stated that construction could cause flooding, landslides and disrupt viewsheds.

The Atlantic Coast Pipeline, originally projected to cost up to $5 billion and be finished by 2018, is now estimated to cost $7.5 billion. Developers say they expect the project to be complete by early 2021.

Editor’s Note: This article was updated from the print version to include new information.

Read about the ongoing protests against the Mountain Valley Pipeline, including felony charges against two pipeline opponents, in our June/July issue.