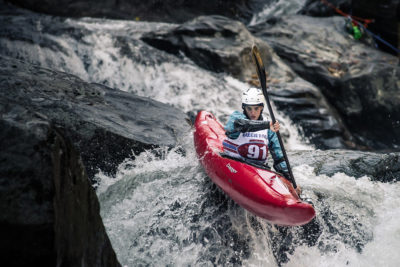 Emily Shanblatt began whitewater kayaking as a Warren Wilson College student in 2007 on a trip down the Class II Tuckasegee River.

“The feeling of maneuvering amongst the chaos of the waves and the current, learning how to read the water, and the exhilaration of just a few unexpected splashes in the face had me hooked,” says Shanblatt.

In 2012, she started leading paddling trips for the French Broad River Academy for Boys, a private middle school in Asheville, N.C., that specializes in adventure education in addition to traditional academics. In 2015, she joined three other staff members in opening the FBRA for Girls.

“We’re doing incredible things with using the outdoors to teach character development and leadership,” says Shanblatt. “These girls are going to totally shape the future, and so many of the valuable skills they’ll use later in life are ones they’re learning while canoeing with each other every week.”

As the school’s outdoor programs director, she organizes outdoor activities and trips and finds new ways to push the students in their technical, leadership and communication skills as well as social and emotional relations.

“We’re always asking ourselves, ‘What skills are these girls going to need in high school, college and the world beyond?’ And then we try to use the outdoors to reach those skills,” says Shanblatt.

The Southeast is known for creeking, a type of whitewater paddling with low-volume boulder gardens, waterfalls and slides. Shanblatt says she loves this style because it puts an emphasis on skill development and working with the river. Some of her favorite spots include the Green River in Saluda, N.C., and the steep creeks of the Smoky Mountains. When it comes to teaching Class I to III whitewater, Shanblatt says it is hard to beat the French Broad.

“From my home in Asheville, I can access close to 100 whitewater sections within an hour or two. Many of these sections are Class II and III, which make them excellent spots to build skill, gain confidence and mess up without big consequences,” she says. “When it comes to Class IV and V, we also have some of the world’s best and easiest access to challenging whitewater.”
In addition to directing the academy’s outdoor program, Shanblatt also teaches 6th grade math.

“Both roles are incredibly rewarding because we get to see the students in so many different situations, venues and lights,” says Shanblatt. “We believe the outdoors is like a hack, or a shortcut, for developing competent and confident young women, and we’re seeing that firsthand with our students everyday.” – By Hannah McAlister

Back to The Whitewater Spirit: Women making a difference