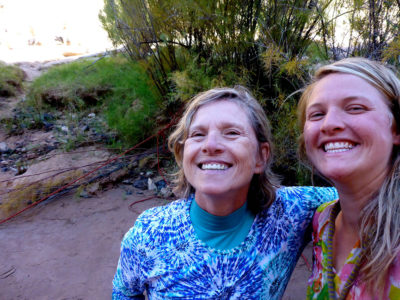 Cynthia Grimes canoed during the 11 summers she spent at an Arkansas summer camp, where she also began teaching paddling in 1970. She later taught in Colorado and Switzerland.

In 1982, Cynthia Grimes and her husband were seeking more whitewater kayaking experiences and joined the Bluegrass Wildwater Association, Inc., a Kentucky organization that supports river recreation and wilderness waterways. She continued to paddle when she was pregnant with her daughter, Emily Grimes, who says she “grew up in parking lots at the Ocoee and Gauley.”

“I spent a lot of time in my early 20’s ‘charging’ Class V,” says Emily Grimes. “The rush was great and so were the social media posts, but it was never fun for me; and what’s the point of kayaking if it’s not fun? These days I prefer to kick it sans fear.”

Following in her mother’s footsteps, Emily Grimes has taught kayaking for 10 years, working in Canada, China, Washington and Kentucky. “The joy people experience while kayaking transcends political borders and is felt in all cultures,” she says.

The pair have many favorite paddling spots in Kentucky including the Russell Fork, the Big South Fork of the Cumberland and Elkhorn Creek.

“I enjoy the beautiful surroundings, bonding with fellow paddlers and the magic of rivers,” says Cynthia Grimes. “They’re always moving, always taking you to new adventure and expanding your personal feeling of accomplishment.”

For 21 years, Cynthia Grimes has also taught the kids’ clinic at the Bluegrass Wildwater Association.

“We don’t lecture the kids much about strokes and technique,” says Cynthia Grimes. “We get them on the water and coach them about what they feel and experience, and how to use their powers to dance with the river currents and go where they want to go.”

“Over the years I have been fortunate to teach many students with various disabilities,” she says. “It is great to see people flourish when they see themselves accomplishing things most of their friends can not even begin to imagine.” — By Hannah McAlister

Back to The Whitewater Spirit: Women making a difference