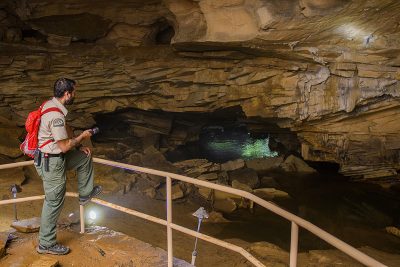 A guide leads a tour through a chamber at Carter Caves State Resort Park. Photo courtesy of KY State Parks

Where: Olive Hill, Ky., in Carter County
How to access: Multiple caves lie within the state park, which has a variety of amenities including camping and hiking.
Difficulty: The most accessible caves feature shorter tours with relatively easy terrain. Several of the more strenuous caves offer longer tours from Memorial Day to Labor Day. There are two caves open for independent exploration, although a permit is required.
Fun Facts: The Dance Hall in Cascade Cave, the largest scenic cave, received its name because the previous owner of the land held weekly dances in the space.
Contact: Visit parks.ky.gov/parks/resortparks/carter-caves for more information.

The Rockcastle Karst Conservancy, an organization dedicated to safe caving practices and land protection, owns three cave preserves in Rockcastle County, Ky. The group allows limited access to Misty Cave and Pine Hill Cave, but the Great Saltpetre Cave Preserve is closed. All preserves are closed from Nov. 1 to May 1 while endangered Indiana bats are hibernating. The conservancy requires cavers to submit a visitation form two weeks before their planned trip, and also requires at least one member of the party to be a member of the conservancy or the National Speleological Society or one of its approved chapters. Parties must be between three and 12 people, and any larger groups require special permission. More information can be found online at rkci.org

Spanning 52,830 acres in Central Kentucky, Mammoth Cave National Park features the world’s longest cave system at about 400 known miles. Other large cave systems nearby include Great Onyx Cave, which is within the park’s borders, and the Fisher Ridge Cave System, which is separated from the Mammoth Cave system by a mere 300 feet. Mammoth Cave offers wheelchair-accessible tours, surface-level activities, camping and independent cave adventures. The park recommends making an advance reservation for caving. Visit nps.gov/maca or call (270) 758-2180 for more information.

Hidden River in Horse Cave, Ky., offers three caving experiences. The cave was closed for most of the 20th century due to groundwater pollution caused by sewage. In 1987, the American Cave Conservation Association relocated to Hidden River and established a site of education, appreciation and conservation. Contact: Visit hiddenrivercave.com or call (270) 786-1466 for more information.

Back to Caving Adventures