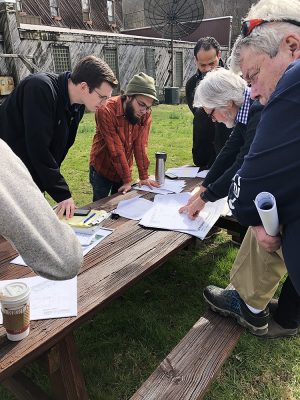 Standing outside Appalshop in Whitesburg, Ky., planners look at diagrams for a proposed outdoor pavilion with integrated solar power. Photo courtesy of MACED.

The loan payments and energy bills are structured in a way that the solar panels will start saving money on day one. The solar installation for HOMES, Inc., which broke ground in early March, will take nine years to pay off, according to MACED’s Josh Bills. He estimates that some of the projects will take up to 15 years to be paid off.

The four installations will provide 190 kilowatts of power and cost $500,000, $230,000 of which will be used for the construction of an outdoor pavilion with solar panels for Appalshop.

In a February Lexington Herald-Leader op-ed, representatives of the four organizations wrote that this makes the installations the largest renewable energy project in Letcher County history. The representatives explain that they chose to participate in the project due to constant price increases from monopoly utility Kentucky Power.

“Energy costs have been rising for years, and Kentucky Power has recently implemented new demand charge rates that place further strain on our cash-strapped community facilities,” reads the op-ed. “These increases come at a time when our rural communities face an unusually cold winter, bringing some of our partners to the brink of closing their doors.”

All four organizations are partners in the Letcher County Culture Hub, a network of community-led groups. Josh Bills, who helped provide technical and financial support to the solar project, notes that as other members of the hub realize how much these groups are saving in electricity costs because of the solar installations, they may also make the switch. 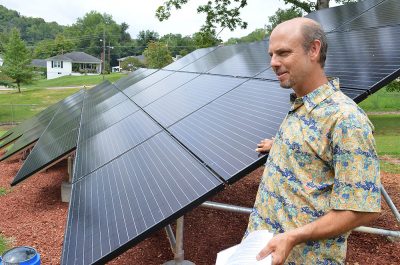 Josh Bills with MACED, above, stands by a solar array that the group helped fund. Photos courtesy of MACED

“It’s one thing for somebody like me to go into a room and say, ‘This is how much solar can save and how much it’ll produce,’” says Bills. “I think it’s a very different thing for somebody that’s part of a hub group like that to see their peers benefitting and looking at what their monthly electric cost savings that they’re seeing with solar versus how much they’re having to pay to finance it.”

On March 26, Gov. Matt Bevin signed a bill into law that could significantly affect future solar projects in the state. S.B. 100 would greatly limit a solar policy called net metering by reducing the amount of money utility companies pay Kentuckians for the excess energy produced through rooftop solar panels. The net metering changes would only apply to projects installed after 2019 and would not affect the Letcher County project.

Utility companies argue that they are paying too much for energy from ratepayers, and that other customers are shouldering those costs. But Bills argues that the amount of money ratepayers pay to subsidize net metering is miniscule. Additionally, the development of solar can save money and decrease carbon emissions by lessening the need to invest in fossil fuel infrastructure.

“If you spread that out across all customers in Kentucky, it comes out to like 3 or 4 cents per customer per year,” says Bills. He states that S.B. 100 would have negative effects on residential solar.

“If it passes, it means we’ll still see solar installed, it’s just going to be happening on grocery stores and buildings that have daytime use and less so on residences, which is really unfortunate,” Bills said in early March, before Gov. Bevin signed S.B. 100 into law. “The place we want to see solar, yes it is on small commercial and businesses, but we also want to see that happen on low-income homes.”

Editor’s Note: This article was updated from the print version on April 5, 2019, to reflect Gov. Matt Bevin’s signing of S.B. 100.