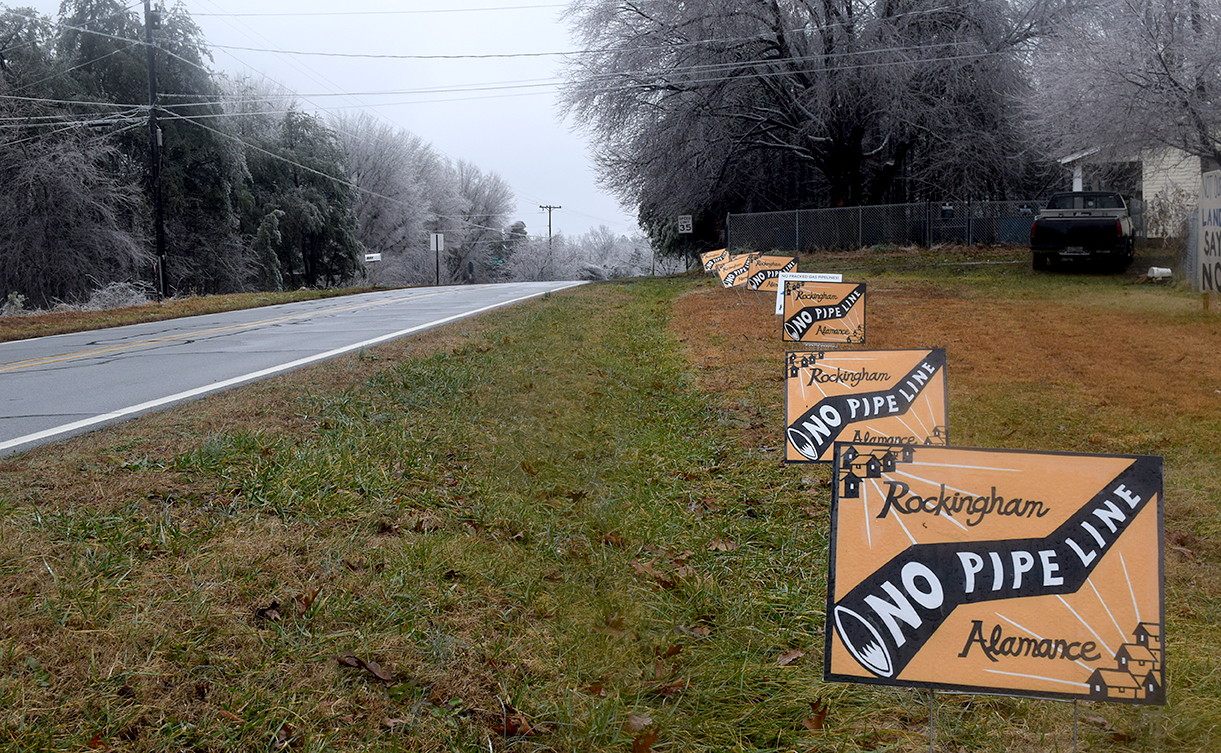 Elizabeth Ore and Peter Cowan’s yard is lined with signs protesting MVP Southgate. If approved, the pipeline would cut their front yard in half. Read their story here. Photo by Kevin Ridder

The gas would feed into PSNC Energy’s distribution network, and a compressor station would be built near Chatham, Va., to pump gas through the pipeline. A second compressor was originally slated near Eden, N.C., but Southgate scrapped those plans when they filed for approval from the Federal Energy Regulatory Commission on Nov. 6.

Southgate would be 16 to 24 inches in diameter, compared to the Mountain Valley mainline’s 42 inches. The proposal requires a 50-foot permanent easement on landowners’ property with a temporary construction easement of up to 100 feet. Developers aim to finish by late 2020, which may be difficult given the legal challenges that have halted construction along much of Mountain Valley’s main route (read more here).

Landowners, environmental groups, local governments and state agencies alike have met Southgate with resistance. On Dec. 12, a coalition of environmental groups including Appalachian Voices, the publisher of this newspaper, filed a motion to intervene in FERC’s decision on whether to approve the pipeline. Then on Dec. 20, PSNC Energy, a subsidiary of Dominion Energy subsidiary SCANA Energy, dropped its 30 percent ownership stake in Southgate. PSNC is still committed to buying gas from the pipeline.

In North Carolina, the Alamance County Commissioners and the Stoneville Town Council have passed resolutions opposing the pipeline. In a Nov. 5 letter to FERC, the state Department of Environmental Quality told the agency that they “remain unconvinced that the Southgate project is necessary.” FERC is expected to host a public comment period on whether to approve the pipeline this spring.