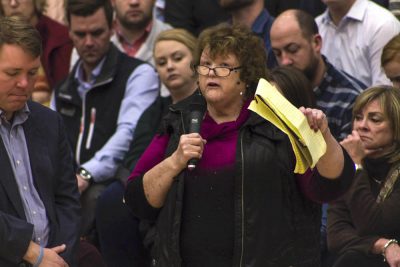 Duke favors the cheaper method of capping the toxic coal byproduct in place instead of moving it to lined landfills away from water sources, which is preferred by many residents and environmental groups including Appalachian Voices, the publisher of this newspaper.

The Statesville Record and Landmark reports that meeting turnout was especially high at a school near Duke’s Marshall Steam Station, where dozens of people were turned away after the gym’s 450-person capacity was reached. When DEQ personnel asked the crowd if anyone was in favor of the cap-in-place method, not a single person raised their hand.

John Ong, a resident of the nearby Lake Norman area, told the Record and Landmark that the DEQ’s mission is “to protect the natural resources of the state and the health of the people in it.

“Given that — and the fact that we all know that science is clear that unlined pits pose a danger, I would ask that the department and the rest of the state government step up to protect our health and safety,” Ong said, adding, “Cost is not a factor. Duke Energy is a profit-making machine.”

Luis Rodriguez with the Sierra Club states that attendees have had similar outlooks at the other meetings. But what happens next depends on the agency.

The DEQ is accepting public comments on Duke’s closure options through Feb. 15 and is expected to complete its own review by April 1. Duke is then required to submit its final closure plan to the agency by Aug. 1, after which the DEQ will accept public comments before making a final decision.

On Dec. 22, 2008, a dike burst at Tennessee Valley Authority’s Kingston plant near Harriman, Tenn., spilling 7.3 million tons of coal ash across 300 acres of land. Nine hundred laborers, including some TVA employees, worked to clear the site over seven years and many were sickened from exposure to the toxic ash.

On Jan. 11, a federal judge ordered mediation between the workers and Jacobs Engineering. This follows the court’s Nov. 7 ruling in favor of the workers against Jacobs Engineering, the TVA contractor that managed the cleanup.. The verdict entitles them to seek money to cover medical treatment for themselves and their families – many of whom were harmed by exposure to the coal ash that workers carried home.

A USA TODAY NETWORK-Tennessee investigation and a separate probe revealed that workers were lied to about the risks of coal ash exposure by Jacobs Engineering and TVA representatives. Jacobs Engineering also denied requests for safety equipment, refused to provide proper showers and changing stations and pressured the U.S. Environmental Protection Agency to lower labor safety standards such as protective gear. Additionally, the contractor manipulated tests of workers’ exposure to coal ash by tampering with monitors and test samples.

A decade later, 35 of the former crew have died and more than 300 others are sick or dying according to the news outlet’s investigation. On the spill’s anniversary, Roane County officials held a memorial service to honor, thank and apologize to the laborers. Two days later, TVA ran a full-page ad in Roane County News thanking its contractors, including Jacobs Engineering.

Groundwater testing conducted by TVA in January 2018 at the spill site’s coal ash landfill shows a spike in related toxins. In response, Roane County and Kingston officials voted to pursue legal action against TVA. Results from follow-up water testing will be released in March, but no air quality testing has been done. — By Hannah McAlister

In January, a bipartisan group of Virginia legislators announced their support for coal ash legislation supported by Gov. Ralph Northam and Dominion Energy, the monopoly utility responsible for more than 28 million cubic yards of coal ash at its four unlined impoundments in the Chesapeake Bay watershed. On Feb. 14, the legislation passed the state House, and on Feb. 15, an identical bill passed the state Senate, headed for Gov. Northam’s desk.

The agreement, which was not finalized at press time, would require Dominion to recycle roughly a quarter of that within 15 years, selling it to other companies that would encapsulate the waste in the process of making concrete or other materials. The remaining coal ash at the sites would have to be relocated to lined landfills away from water sources by 2023.

The proposal would also allow Dominion to recoup up to $225 million in cleanup costs from its ratepayers, capping the amount the average customer would pay at $5 monthly.

Dominion had previously lobbied for a clean-up method known as cap-in-place, which would have allowed it to leave coal ash in unlined landfills covered with an earthen cap. Environmental groups pushed for full excavation, and many praised the initial legislation.

“Dominion is now finally acknowledging that getting this ash out of the ground is the only way to protect people and waterways, and that we can do so in a cost-effective way,” Attorney Nate Benforado of the nonprofit Southern Environmental Law Center said in a prepared statement. — By Molly Moore

Editor’s note: This story was updated on Feb. 18 from the print version to reflect the Virginia legislation’s passage.