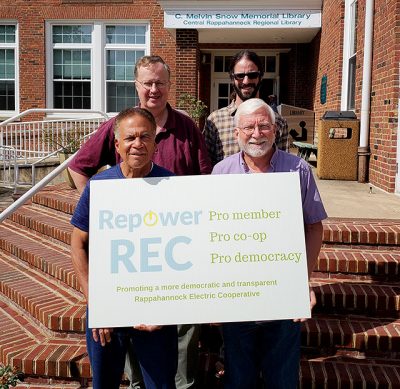 Find an update from Rappahannock Electric Cooperative in Emily Piontek’s December 2020 blog about how Virginians can get involved in their electric cooperatives.

Former Sierra Club Virginia Chair Seth Heald has been a member-owner of Virginia’s Rappahannock Electric Cooperative in the northeastern part of the state for more than nine years. He has become an outspoken critic of the co-op’s board of directors’ lack of transparency. Rappahannock board meetings are closed to the public, meeting minutes are not made available and board compensation is kept secret.

According to Heald, member-owners that mail in signed proxy forms are entered for a chance to win prizes, and there are typically thousands of blank ballots. The board treats each blank ballot as an invitation to vote on that member-owner’s behalf, and then selects a single candidate for all the blank ballots to count towards. Heald contends this practice — which generally determines the election outcome — is “unfair and undemocratic.”

In 2017, Rappahannock attempted a $22.2 million rate increase, which included doubling the residential grid access fee. This type of fee, which is charged regardless of how much electricity is used, disproportionately affects low-income households and discourages homeowner solar and energy efficiency improvements.

After intervention from Sierra Club Virginia and the state attorney general, the State Corporation Commission instead approved a 40 percent increase to the fixed charge, which is now $14. Deciding it was time for reform, Heald banded with other member-owners and solar advocacy organization Solar United Neighbors of Virginia to form the member-owner advocacy group Repower REC.

In April 2018, the group informed Rappahannock of their intent to put three bylaw amendments up for a vote at the co-op’s 2019 annual meeting. The amendments would open board meetings to the public, reform board election procedures and allow the public to see how much board members were paid.

But when Repower REC asked the co-op for the necessary paperwork to begin collecting the required 500 signatures to put the amendments on the ballot, the Rappahannock board of directors refused.

So, in August, three Repower REC members filed a petition with the Virginia State Corporation Commission, alleging that the co-op was breaking state law by withholding the form and by requiring the signatures at all. Rappahannock categorically denied the allegations, and the case will be heard by Virginia’s State Corporation Commission on Dec. 11.

“I’m hopeful that we will, at a minimum, get the petition form,” says Heald. “The trouble is we need to submit our petition signatures by around Feb. 1, and the 500 signatures are required to be spread fairly evenly around [the co-op’s] 22 Virginia counties.” He noted that the board’s reluctance may delay the vote on the amendments until 2020.

Soon after Heald filed the complaint, all of the 12 other electric cooperatives in Virginia intervened in the case to oppose the reforms, including Powell Valley Electric, which also serves part of Tennessee.

“I’m hopeful, I think our case is strong,” Heald says. “But it is concerning to see all of the electric co-ops in the entire state piling on to oppose some reasonable reforms from three co-op members.”

Regardless, Heald is undeterred. “This is a long process,” Heald says. “It’s not something that you can do in three months or six months — but we are growing and we’re planning to keep at it.

“If you’re not involved, then you’re leaving it to other people to control what’s happening at your utilities,” he adds. “The only way to ensure that your voice is heard is to be active and engaged and inform yourself of what’s going on, and our co-op really makes it hard to do that.” — By Kevin Ridder

CORRECTION: Dec. 20, 2018
The print version of this article incorrectly stated that the three Rappahannock Electric member-owners filed a lawsuit against their co-op. They filed a petition with the Virginia State Corporation Commission.

CORRECTION: Dec. 21, 2018
A previous version of this article incorrectly identified Seth Heald as a current Sierra Club Virginia Chair. Heald stepped down from this position in 2017.