Electric cooperatives generally purchase electricity from other entities, such as the Tennessee Valley Authority, Dominion Energy and Duke Energy. In the Southwest, several electric cooperatives are demanding better terms and more renewables from their power provider 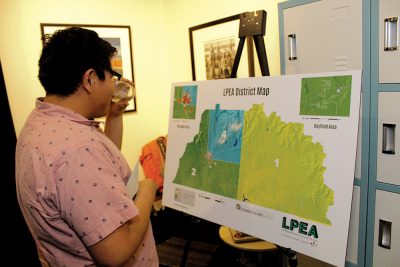 The San Juan Citizens’ Alliance holds an event to educate La Plata Electric Association members about how they can get involved in their cooperative. Photo by Anna Peterson

In 2000, 14 electric cooperatives in the Southwest entered into 40-year wholesale power purchase agreements with Colorado-based Tri-State Generation and Transmission, which makes heavy use of coal-fired power. In 2007, New Mexico-based Kit Carson Electric Cooperative refused to extend the contract through 2050.

From 2000 to 2013, Tri-State raised wholesale electricity prices nine times — but a main concern for co-op members was a contract stipulation that capped the amount of renewable energy the co-op could generate itself at 5 percent.

In 2016, Kit Carson reached an agreement with Tri-State and bought themselves out of their contract for $37 million, entering into a 10-year power purchase agreement with Florida-based Guzman Energy instead. That December, the co-op’s board announced a plan to generate 34 percent of their total energy demand and 100 percent of daytime energy on sunny days with solar by 2022.

As of August, Kit Carson had installed 10 megawatts of solar energy — enough to supply 25 percent of the co-op’s daytime load — according to Mountain Town News.

According to a November 2017 blog post by Emily Bowie, a then-campaign organizer with the Alliance, member-owners were upset with La Plata’s board of directors for misrepresenting residents with solar panels. At that month’s board meeting, Director Davin Montoya reportedly stated, “Solar people want to come in here and get free energy and be subsidized.”

An election for four board seats was approaching in May 2018. So, over the next few months, La Plata member-owners worked with the San Juan Citizens Alliance and supported more progressive board candidates. Alliance-backed candidates won three of the four seats.

“It was very much a ground-led effort,” says Bowie. “The community members came to us, they wanted our support and we were able to provide that stable coordination, but that just enabled the community members to continue to do what they were already doing and get the results that we got.”

In August, the board voted 11 to one to establish a committee to assess their power-purchase contract and look into other power suppliers. Bowie states that there are “a lot of potential pathways that the co-op could take,” including staying and negotiating with Tri-State.

Any decision will partially hinge on Tri-State’s appeal of a June 2016 Federal Energy Regulatory Commission ruling that prohibited Tri-State from charging fees on solar built by cooperatives that exceed Tri-State’s 5 percent cap on renewables. Colorado-based Delta-Montrose Electric Association, the cooperative that brought the case before FERC, announced in 2017 that they are also seeking to leave Tri-State. — By Kevin Ridder