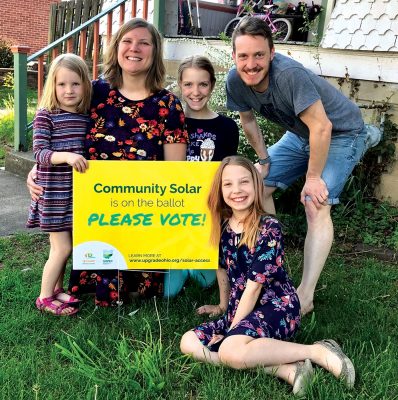 In eight states so far, a number of electricity and natural gas ratepayers have been able to cut out the monopoly utility middleman and buy power straight from the source. Some states, like Ohio, allow individual electricity customers to shop around, while others let municipalities band together to purchase electricity wholesale through a process called “community choice aggregation.”

Some aggregated communities like Cincinnati, Ohio, offer 100 percent green power options. If an individual does not want to partake in aggregation, they may opt out and choose another power provider at any time. More than 250 communities in Ohio have switched to municipal aggregation for both gas and electricity, according to LEAN Energy US, a nonprofit group that advocates for aggregation.

The Northeast Ohio Public Energy Council, an aggregator established in 2000 that serves more than 500,000 Ohioans, estimates that it saved customers more than $300 million from 2001 to 2017. Not all Ohio customers are allowed to participate in aggregation, however. Rural electric cooperative members, municipal utility customers and net metering users are some exceptions.

Aggregators in Ohio can also fund programs for energy efficiency and renewables. Northeast Ohio Public Energy Council offers grants for energy projects that lower utility costs and increase renewables, and had funded 330 such projects as of August 2017.

According to the Southeast Ohio Public Energy Council, a smaller aggregator, residential electric customers typically save $50 to $200 a year with community choice. Residential natural gas customers save roughly $10 to $50 per year. The council offers loans to commercial customers for energy efficiency upgrades and free renewable energy assessments for farmers and small businesses through the U.S. Department of Agriculture.

Individual communities can take renewable initiatives further still. Residents of Athens, Ohio, overwhelmingly approved a carbon tax for community choice aggregation members in May. The fee, which goes into effect in 2019, is expected to raise residential electric bills by around $1.60 to $1.80 per month, and will fund solar projects on public buildings, according to The Athens Messenger. — By Kevin Ridder