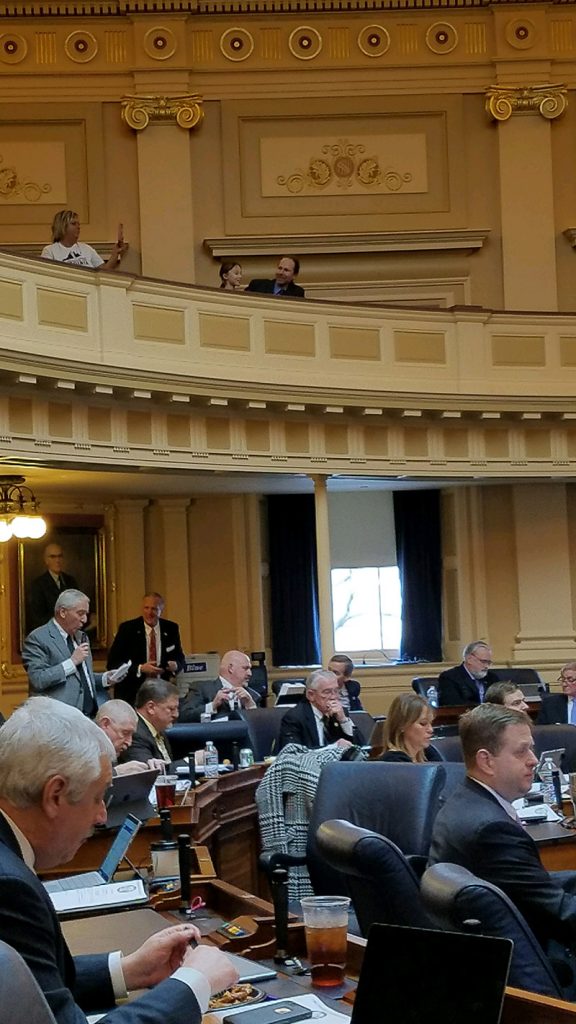 Tom Cormons and his daughter observe the Virginia House of Delegates from the upper gallery. Photo by Mark Keam

Passions are running high in our Appalachian states and across the country. I turn 44 this fall, and there hasn’t been a political moment like this before in my lifetime.

If a majority of Americans weren’t responding to current political events with anger, worry and frustration, we would have even more reason to be gravely concerned about our country. Yet if these negative emotions were all we were feeling it would be awfully hard to get out of bed in the morning!

Fortunately, the blatant amorality, recklessness and dishonesty on display at the highest levels of government — plus the subtler, more long-standing injustice and corruption we’re now seeing more clearly — are being met with another natural reaction: a surge in joyful power-building, winning strategies and action. And in a time known for its divisiveness, we also see people joining together to stand up for things we all love.

Our region is one place where this impassioned and thoughtful uprising is hard to miss.

The behemoth companies bent on controlling our energy system, with help from the Trump Administration and some of our states, are being met with a citizen resistance spanning the political spectrum and all walks of life, on a scale they never imagined.

Their efforts to deepen our addiction to fossil fuels by ransacking public lands and waterways, private property and vulnerable communities to build two completely unnecessary fracked-gas pipelines are facing a formidable coalition of ordinary people, citizens’ groups and courageous political leaders in a monumental David and Goliath battle.

Some of these same energy companies have long acted as if they own the state governments charged with regulating their monopolies — and, given the millions of dollars they spend on campaign contributions and lobbying, that’s understandable. But now the people that a Dominion Energy executive derided in the Washington Post as “the general citizenry” are giving them a run for those millions in purchased influence. (Read “Power Play” in this issue).

I am proud to say that “the general citizenry” means you and me. Embracing our power as citizens is among our most important traditions and responsibilities. Protecting this region we love and our children’s futures ultimately falls to us.

This is why Appalachian Voices is gearing up to take “Energy Democracy” to the next level. If the best interest of citizens like us determines how we generate, transmit, and use energy, we can protect our health and natural heritage, build community wealth where it’s most needed, and curtail the energy cost burden that’s felt most acutely by those unable to afford it.

From working in rural places to create solar jobs and fight fracked-gas pipelines and mountaintop removal, to advocating for ordinary folks and our land in our capitals, our strength has never been greater or more needed than now. We believe our ambitious plans for the next three years reflect this. With your help, we can make them a reality.