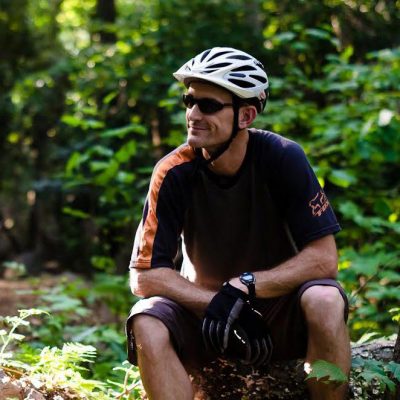 Paul Stahlschmidt is a board member of the Northwest North Carolina Mountain Bike Alliance, a nonprofit mountain biking association.

Tell me about your relationship with the Pisgah and Nantahala National Forests. How do you use these lands?

“The forest provides something that many other public lands in WNC do not: remoteness. The vast acreage and backcountry experience that only forest lands provide means there are places that take effort (and sometimes skill) to access. I’m all about that.”

“There are too many to name just one, so my favorite place is the one I have not found yet.”

What elements of the forest would you like to see preserved?

“Infrastructure improvements to developed areas, including trails. More funding given to managing these areas, and more resources to deal with the large numbers who are visiting the lands. They also need to be reinforced to prepare for even more people in the future.”

“It is an important process because it allows for public input and participation. Partnerships get formed and understanding becomes realized at meetings and through communication between stakeholders and also the Forest Service. There are many engaged citizens and stakeholders who have participated, including me.”

What concerns do you have about the outcomes of the Pisgah and Nantahala National Forest plan?

“I feel good about the process and hopeful that the outcomes will be reflective of what people want. There has been a lot of great collaboration as part of the planning process, and many partnerships have been formed.

What do you want to gain from the new plan?

“Firstly, I believe that mountain bikers would want to keep what they already have in terms of designated trails to ride. After that, more access. Mountain bikers are underserved in some areas, including Wilson Creek where only four trails (out of 29) allow bicycles. The Grandfather Ranger District as a whole only has 21 percent of its trails open to bikes. That is 57 miles out of 267.”

Do you feel like there should be an opportunity for new wilderness in the Pisgah and Nantahala National Forests?

“Yes, with lands that meet the criteria for wilderness, and if it is accepted by the majority of the public. In locations where other options could serve the public better, gain more support, and continue to protect the land, I support those.”

“Balanced…what a great word! This plan covers ~1 million acres of national forests. There is enough space and enough resources for everyone. The law requires an inventory of lands, and this inventory represents what is out there … what is missing, what is in abundance, what needs attention, etc. After loads of public input, years of stakeholder collaboration, political support, etc, the USFS should have plenty to make decisions that represent a balance.”

Do you feel like your interests conflict with other stakeholders?

“No. Mountain bikers ARE conservationists. They go to the forest for the same reasons that hikers and hunters and equestrians, and fishermen, and others who seek nature, beauty, and solitude. There are certainly some interests that are unique to these groups, but the large majority of interests are similar. It is that, which we should all rally behind.”