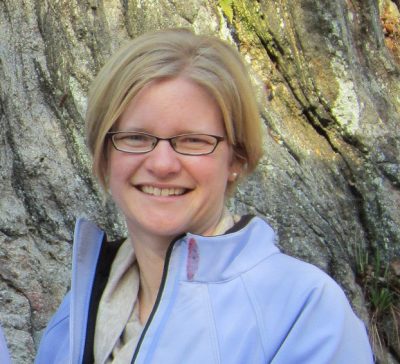 Megan Sutton is the Southern Blue Ridge Program Director for The Nature Conservancy, a nonprofit environmental conservation organization. Sutton is also a member of the Nantahala-Pisgah Forest Partnership, a collaborative group of conservationists, cultural interests, recreational users, timber industry representatives and more who are seeking to shape the revision of the Nantahala and Pisgah national forests’ management plan.

“I was born in Western North Carolina and have many generations of family that go back in this area, and I grew up backpacking in these national forests.”

“I think the national forests within the Southern Blue Ridge region are extremely biologically diverse and considered a hotspot for biodiversity. And in my role and work at The Nature Conservancy, there’s a clear link to why I think Pisgah and Nantahala are so special due to that. I would also add that I think that these forests that we have here are some of the most unfragmented forest lands that are large in size that we have in the Eastern United States.”

“It’s hard to pick, I have many favorite places. One of them is the Roan Highlands. I was actually just up there this past weekend hiking across the high elevation grassy balds, which are a globally rare natural community, so that’s one of my favorite places. If you haven’t been there, the views are expansive. There’s 360 degree-views for many miles along the Appalachian Trail corridor.”

“I would like to see many aspects of the forests effectively conserved, which in my mind means restoring forest health and resiliency. And I would focus on those aspects and there’s many ways that that can be done, but that’s what I feel is most important.”

“I would like to see an increased priority placed on ecological restoration of our national forests, which in my mind would get at the two things I just mentioned, which is forest health and resiliency to things like climate change. And that would involve doing more active management on the ground, using tools such as controlled burning and coupling that with different ways that you can use silvicultural prescriptions to manage forest stands in a way that promotes health and resilience.”

“It’s critical. The agency could create a plan and unless there was broad support across a diversity of stakeholders, implementing it would be extremely challenging. And so because of that, the agency really needs to focus on the process just as much as the outcomes of the final plan.”

“I think that they’ve heard from collaborative groups like the Nantahala-Pisgah Forest Partnership that we would like to see win-win alternatives presented in the forest plan that are analyzed, and by that I mean where all stakeholder groups can see themselves and their interests and all the alternatives. And so I guess my advice would be to make sure that that is there. So rather than pitting interests against each other, looking for ways to be inclusive and incorporate all.”

“Yes. I feel like there should be an opportunity for all interests to have new or more areas that address their interests or concerns, and wilderness would be one of those.”

What do you want to see as a result of the new plan?

“Obviously there’s a handful of things that we would like to see. Most importantly, we would like to see broadly supported and implementable plans that follow the guidelines within the 2012 planning rule requirements. And some of those that I think are most noteworthy are that the plan is developed collaboratively, and that the plan is focused on the natural resources and ecology of the area, and trying to maintain and/or restore these systems, moving the needle over the life of the plan in terms of ecological restoration.”

“I’m cautiously optimistic. I know that the interdisciplinary team that’s been working on this forest plan revision for so many years are extremely well-versed and smart and passionate individuals, and I think that they are working really hard to make a great plan. And I’m cautiously optimistic that that’s what’s going to come out at the end of the summer for feedback from the public.”

“I think that many or multiple collaborative groups have weighed in on this and given the agency a lot of food for thought in regards to how they can creatively achieve and maintain this balance. And my hope is that they will pay attention and listen to the very diverse and large groups of people and interests that are coming together and trying to provide information and advice on how to do this.”

“Not on the face of it, I think the only conflicts that I really see are potential for prioritizing; making sure all interests are getting prioritized. Including The Nature Conservancy, and not at the expense of any other interest. So I think that there’s a lot of room for creative problem solving in how to balance those interests. Like I said, I’m cautiously optimistic that they’re going to do that.”