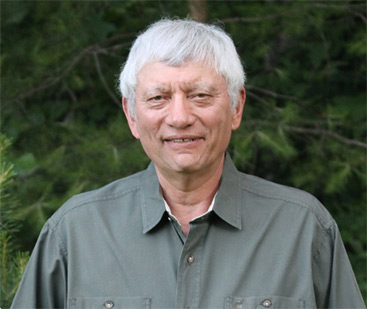 Jim Sitts is the Appalachian timber manager with Columbia Forest Products. He is also a member of the Nantahala-Pisgah Forest Partnership, a collaborative group of conservationists, cultural interests, recreational users, timber industry representatives and more who are seeking to shape the revision of the Nantahala and Pisgah National Forests’ management plan. Answers have been edited where needed for clarity and length.

“Our company has had a plant in here since 1983, and over the years we’ve bought some timber from the national forest. Most of the logs that we use at our facility come from private land, some as far away as 250 miles. Probably today, less than 50 percent of our logs come from Western North Carolina. But we cut a lot more volume today.”

“They’re the lands that nobody wanted; 100 years ago, most of them were cut. These were the timber baron days. The northern timber barons came down and set sawmills up at the foot of a 50,000-acre cove and built logging railroads up into the cove up near the mountains and logged there for 20 years and cut everything in sight. What wasn’t cut was probably burned. And when all the timber was gone, they tore the mill down and left.”

“Fortunately, our government had the foresight to allocate money to buy these eastern national forests. Almost all of our eastern national forests are these lands that were essentially cut over. The remarkable thing to me is the resilience of these lands. Today we have some of the finest stands of timber, we have some of the cleanest, purest water for recreational usage. To me, the miracle is that people had the foresight to purchase these lands and manage them for the last 100 years. To me, that’s the miracle.”

“If I had a favorite place, one of them would be the Graveyard Fields areas. There’s not any trees up there, but you’ve got a beautiful view of the parkway.”

What elements of the forest would you like to see preserved?

“I feel like some of these areas are managed as wilderness anyway; so why not designate a few of them as wilderness?”

“I’d like to see more timber made available for harvest, and I think we will see that. I know it’s not going to be a huge amount, but it will certainly be more than has been available in the past. Money has to be allocated to do the management, the Forest Service has to hire people that can log timber, people that can lay out a timber sale, people that know what has to be done to create different types of wildlife habitat. They have to hire these specialists so money has to be there, appropriated from the government too.”

“You can’t just own 190 million acres and not take care of it. You have property rights to maintain, roads to maintain; it takes a lot of money to maintain it. One of the ways that you can earn money to do those things is through timber sales. Timber harvests do return hard currency to our government, to the national forest, and a lot of it is designated to be used for regeneration and restoration work. It doesn’t just go into the general fund — or it’s not supposed to anyways. It’s not to say there’s not money to be made through recreation, there is. But it’s not all about money. These [national forests] are a treasured resource and people have to realize it does take money to maintain them and take care of them. You have to protect them.”

“Because the forests change. We’re losing the ash trees, we’ve lost most of the hemlocks. And we don’t know exactly how some of that is going to affect these ecosystems. We’re dealing with something that takes a long time to see the product of your work. It takes 80 to 100 years to see the results a lot of times of what’s happening. I think that’s why you need to sit down and look at these plans every 15 years or so and make revisions where they’re needed.”

“It has to be better than what we have today. I think everybody will be happier with it than they are with the current plan because really, everybody had a lot of input with this plan. I personally think that there’s probably going to be a few people that are extremely disappointed; there always are, on both sides. But I think in the long run that we’ll have a better plan than we’ve had and we just need to move forward and just be thankful we live in a country where we’ve had the opportunity to contribute like this.”

“These are our public lands, and I’m thankful that we have them, and I think everybody is that has participated in this process. We all enjoy them. Just because I’m in the timber industry doesn’t mean I don’t like to hike and fish and hunt just like other people. The most important thing to me is seeing that these lands are protected and well-managed.”

“A lot of areas in the forest effectively are being managed as wilderness today anyway, and I know that there’s a lot of advocates for more wilderness, and I think there certainly can be some additional wilderness designations in Western North Carolina. But at the same time I think there can be areas that can be designated for more timber harvest as well, because it won’t be incompatible with many other uses.”

“People that use the forest for mountain biking, hiking or for horseback riding almost every case, the trails that they ride are old logging roads. It gives you access to many parts of the forest that you otherwise wouldn’t have access to. And it’s not that every part of the forest needs to have easy access, we all agree that there needs to be some wild areas. And I think you’ll see more proposed in this upcoming plan. But at the same time, we think they can expand the areas where we can have timber sales.”

“Without timber harvesting you’re not going to have a lot of species like ruffed grouse. You’ll have less white-tailed deer, you’ll have less rabbit.”

“That’s one of the biggest misconceptions, that we have to be in conflict with each other. This planning process hopefully has taught us that it’ll be an ongoing thing, I think. Even once the planning is over, we’ll keep these groups together and maintain these relationships, helping to provide some oversight to the Forest Service. To me, it’s just the way to live.”