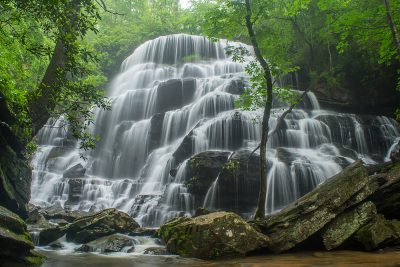 Still looking for an adventure in the area? Stumphouse Tunnel Park, which features Issaqueena Falls and Stumphouse Tunnel, is located just outside the national forest. Note that the park closes at 5 p.m.

Local legends and an 1898 poem say that the 200-foot Issaqueena Falls is named for a Cherokee woman who warned white settlers of an impending attack. To escape pursuing American Indians, she appeared to jump over the falls, but Issaqueena was actually hiding behind the falls and survived.

Great views of the cascading Issaqueena Falls can be accessed quickly through the viewing platform or a steep hike down to its base.