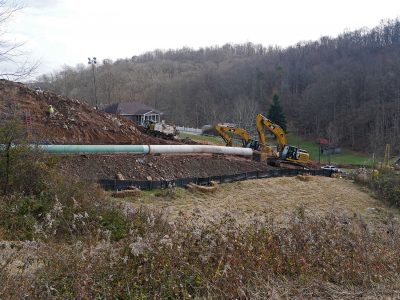 The Federal Energy Regulatory Commission is responsible for reviewing proposals for interstate natural gas pipelines and granting approved projects a “certificate of public convenience and necessity.” Although the agency is independent, it has earned a reputation for rubber-stamping pipelines. State-level agencies take the lead on issuing and enforcing permits under the Clean Water Act and Clean Air Act and monitoring construction activities.

A variety of drilling and transmission companies and electric utilities are behind the build-out of gas pipelines in the Appalachian region. In cases including the Mountain Valley and Atlantic Coast pipelines, joint ventures form limited liability companies to navigate the permitting and regulatory process. The vast majority of the gas transported by the two pipelines is contracted to the companies developing the projects.

Developers insist that demand for natural gas is outpacing capacity, especially as utilities retire coal plants in favor of gas-fired facilities. But opponents point to research that reveals existing pipeline capacity is underutilized and the industry’s financial incentive to overbuild. As Energy Transfer Partners’ CEO Kelcy Warren told shareholders on a 2015 earnings call, “The pipeline business will overbuild until the end of time.”

Will They Create Jobs?

The prospect of job creation and economic growth are central to pipeline developers’ marketing and lobbying efforts. Direct job creation during construction, however, is short-lived and the economic benefits developers promise often overlook potential social and environmental costs. An industry-backed analysis of the Mariner East’s economic benefits, for example, found a multi-billion dollar impact but did not assess the potential for lost property values or risks to the environment or public safety.

Pipeline construction can cause persistent impacts on water quality and wildlife habitat, especially in cases where routes cross rivers and wetlands or mountainous, forested terrain. The environmental impact statements for the Mountain Valley and Atlantic Coast pipelines acknowledge the probability of significant and long-term adverse impacts. According to Physicians for Social Responsibility, communities near gas compressor stations have reported a range of health problems.

Despite being touted as a “bridge fuel” to a climate-friendly future, natural gas itself is a potent greenhouse gas and methane leaks at various stages throughout the production and transportation process present a clear threat. Federal regulators have grappled recently with pipelines’ downstream impacts. In March, FERC re-approved a set of projects including the 515-mile Sabal Trail Pipeline that were nearly derailed by a federal court ruling over the commission’s failure to provide a “quantitative estimate” of greenhouse gas emissions, including those from power plants where gas transported by the pipeline will be used.