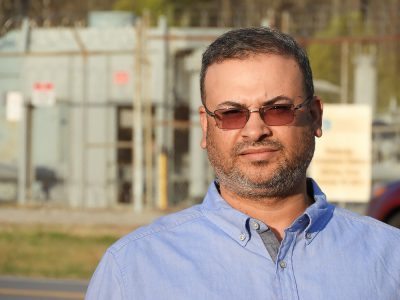 Robie Goins stands before a Piedmont Natural Gas compressor station in Robeson County, N.C., an area that is central to the Lumbee Tribe’s homelands. Photo by John Manuel

Robie Goins does not own land directly in the path of the Atlantic Coast Pipeline, but as a resident of Robeson County, N.C., he is deeply concerned with how it will affect his fellow citizens.


Robeson County is the designated southern terminus of the ACP and already hosts a compressor station, an industrial facility that re-pressurizes gas for a Piedmont Natural Gas pipeline. In 2017, a valve at that station failed and leaked gas into the air.

“They called it an ‘occurrence,’ we called it an ‘accident,’” Robie says. “The construction of the ACP increases the potential for more of these kinds of leaks.”

Just outside the town of Pembroke, Duke Energy plans to build a metering station and a 350-foot-tall microwave tower to relay signals between one compressor station and another. Concerned about the health effects of these facilities, Robie has filed a petition with the county board of commissioners seeking to have a conditional use permit for the metering station and tower revoked, and is waiting to see whether or not he will be allowed a public hearing to provide further evidence against these facilities.

Robie is a member of the Lumbee Tribe and has a particular interest in how the pipeline will impact tribal members and their ancestral lands, as well as other citizens of Robeson County. 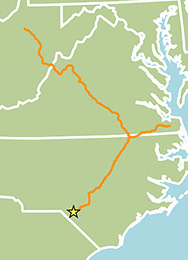 Robie Goins’ location in the path of the Atlantic Coast Pipeline.

“I am concerned about the historical and cultural impacts the proposed Atlantic Coast Pipeline project will have on my community,” Robie says. “Water bodies are often sites of Native American archaeological findings. Construction of the pipeline, and additions to the existing Piedmont Natural Gas pipeline, could affect many tributaries and swamps in the area. They could destroy valuable cultural and historic artifacts and ancestral sites that are important to the Lumbee Tribe. I am concerned that adequate historical and cultural impact study has not been completed by regulators.”

Robie is one of the principal spokespersons in “Robeson Rises,” a documentary film that warns of potential environmental risks from the pipeline. Produced with the involvement of Appalachian Voices, the publisher of this newspaper, the film is posted for public viewing at robesonrises.com.

He also co-organizes EcoRobeson, a local citizens’ group which, in addition to challenging the pipeline, is raising awareness about a Duke Energy coal ash basin in Lumberton, N.C., the chemical GenX recently found in some local wells, and large-scale livestock facilities whose waste disposal methods can contribute to water pollution. — By John Manuel