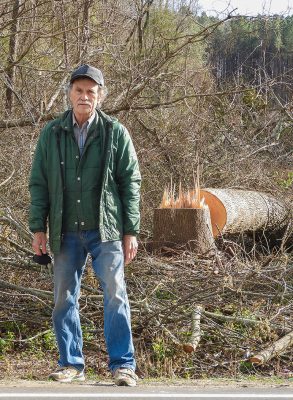 Contractors for the Atlantic Coast Pipeline have already cut the trees across the street from Marvin Winstead’s Nash County, N.C., farm, and they have threatened to do the same with his.


But this square-jawed, blue-eyed farmer is not backing down. Marvin has gone to court to stop this action, claiming that contractors have entered his land without permission and that pipeline representatives have been uncommunicative and misleading in their dealings.

He also has not agreed to the compensation offered by the pipeline developers for the rights to his land, a fact that, until now, has not stopped contractors from entering other landowners’ properties. On March 13, U.S. District Court Judge Terrence Boyle sided with Marvin and Halifax County landowner Ronnie Locke, barring pipeline contractors from entering their properties until compensation is agreed upon. This has the potential to delay the juggernaut that is the Atlantic Coast Pipeline.

For generations, Marvin and his ancestors have raised soybeans, corn, cotton and tobacco on their 79 acres of table-flat land. The Atlantic Coast Pipeline is targeted to run diagonally down the length of those fields. Pipeline contractors have assured him that his production will be unaffected once the pipe is laid and buried, but Marvin is unconvinced.

“I’ve seen pictures of land in Johnston County that had a pipeline laid through it 20 years ago,” Marvin says. “The corn growing over the pipeline was stunted compared to what was on either side of it. That’s because they lay gravel on top of the pipeline to handle heavy equipment.” 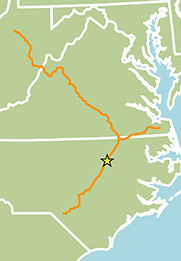 He is also unconvinced about the promise for local jobs. “The land is being surveyed and the trees felled by out-of-state contractors,” he says. “The only local jobs will be holding up traffic signs.”

And the benefit to locals of natural gas? “I think most of it will be shipped to Savannah and exported,” he says.

In fact, Dominion Energy has announced plans to purchase SCANA, a South Carolina electric and gas utility, and a Dominion executive was recorded saying the company expects to extend the pipeline into the Palmetto State.

Marvin is also concerned about the larger impact of increased natural gas production and consumption.

“Companies are singing the song of clean-burning natural gas,” he says. “It may be cleaner burning than coal, but when you factor in releases at the well site, leaks along the pipeline and emissions at the generating plant, you have raw methane escaping into the atmosphere. That is a more potent greenhouse gas than [carbon dioxide]. Renewables, primarily solar, can meet our needs here and now.”

Whether or for how long Marvin can hold off the ACP is unknown. But for now, he and Ronnie Locke are making history. — By John Manuel