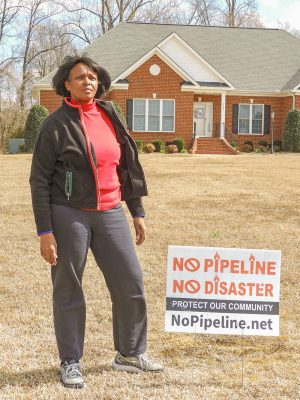 Barbara Exum’s late father had a vision for his 80 acres of land along Exum Road in rural Wilson County, N.C. He hoped to sell some of it to fellow African-Americans for starter homes and to draw his five children to move back here as adults. He succeeded in providing homesites for half a dozen families, including two of his now-retired daughters, Barbara Exum and Mavis Edmunson.


But with the prospect of the Atlantic Coast Pipeline going in across the street and crossing a quarter-acre of Exum forest land, the sisters doubt that any of the other siblings will want to move back.

“We are all seniors here, caring for ailing parents or spouses,” Barbara says. “It’s very discouraging and stressful to bring this kind of thing into our lives.”

Barbara is particularly concerned about the health effects of the pipeline and related gas production, both near and far. Close by, she worries about the accidental release of toxic gas and the possibility of an explosion. “I liken it to the tobacco industry telling us smoking was not hazardous to our health,” she says. 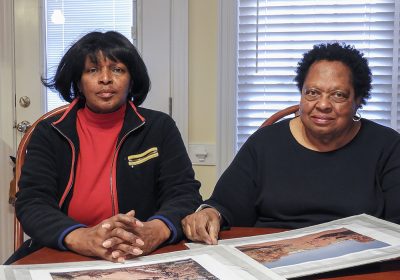 Barbara Exum and her sister Mavis Edmunson look at photos of another pipeline. Photo by John Manuel

She is also mindful of environmental effects of the fracking that would likely take place in the mountains of West Virginia to keep the pipeline supplied with gas in the coming decades.

“There is a presumption that African-Americans do not care about the environment,” Barbara says. “We are concerned for all the reasons everyone else is.”

Barbara says the focus of the battle has now changed to the $58 million that North Carolina Governor Roy Cooper received from the ACP to offset any environmental impacts of the pipeline. She is not convinced this will benefit her community. “Who’s going to get this money and how are they going to spend it?” she asks.

Barbara has been involved in every aspect of the fight against the Atlantic Coast Pipeline, including the formation of an anti-pipeline group, Wilson County No Pipeline. She is trying to raise awareness of the potential effects of the pipeline among people who live close to, but not directly in the path of, the ACP. 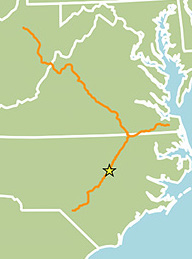 Barbara Exum’s location in the path of the Atlantic Coast Pipeline.

“The sad part is Duke Power and the land management company didn’t even notify people whose land is not immediately affected,” she says.

The steady approval of permits for construction have left Barbara discouraged, but not defeated. “I’d like to think it’s not a done deal,” she says. “We have not settled with the land management company yet [for purchase of an easement]. They have threatened the use of eminent domain.” — By John Manuel