When retired IT engineer Roger Beale found himself with too much time on his hands, he did what any engineer with an interest in weather would do: he built a 5-kilowatt wind turbine in the backyard of his Bedford County, Va., home. 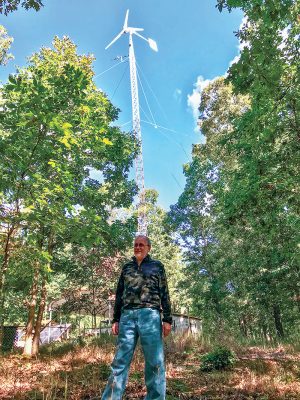 “I like to stay busy,” Beale says. “I enjoy building things, so I decided to build a wind turbine.”

In 2009, he started work on the five-kilowatt turbine, which has gone through several iterations. The turbine sits atop a 100-foot tower in his backyard, which Beale has rigged so he can lower the turbine for maintenance and upkeep.

“I maintain everything myself,” he says. “I designed it that way on purpose.”

In addition to the turbine, Beale has set up a four-kilowatt bank of solar panels in his backyard. Between the two, he’s cut his electric bill in half. A sophisticated control room housed in a backyard shed monitors the output and contains the converters that turn the alternating current from the turbine into direct current that charges four sets of batteries under the shed. Together, the batteries can store 325 ampere hours, which is enough to power his home’s lighting and many of his appliances for 24 hours.

Another shed contains his workshop, which looks more like a NASA control center. Two mammoth monitors dominate the space, which also contains multiple computers and other electronic gear, a pegboard filled with tools, several workbenches and a scale model turbine.

While Beale gets most passionate discussing the technical aspects of wind and solar energy, he does want to see renewable energy supplant fossil fuels as soon as possible.

“Anything we can do to move off fossil fuels is good,” he says. “We are going to see wind power coming, and solar power, too.”

Beale learned a great deal as he designed and built the turbine and the generator it powers. Lately, he’s been passing on that knowledge to middle and high school students involved in the KidWind Challenge, a national competition that involves teams of students building their own wind turbines (Read The Appalachian Voice story on the KidWind Challenge here). 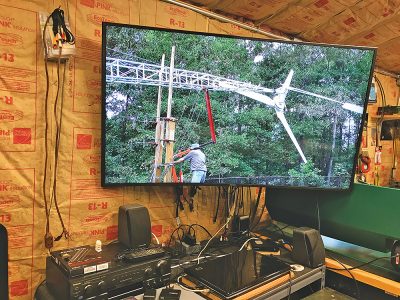 “I taught them about how to carve blades into genuine airfoils,” Beale says.
“They had been using flat, balsa wood blades.”

Beale also worked with the students on how to design their own generator — the unit that rotates magnets around coiled wires to actually generate current.

The Center for Wind Energy at James Madison University, which organizes the regional KidWind Challenge competitions, brought Beale in to talk to all of the teams, according to Remy Pangle, the center’s associate director and education and outreach coordinator.

“We wanted to level the playing field,” Pangle says. “We felt bad that only one team had him as an adviser. This year, we’re trying to make him a resource that’s available for everybody.”

After judges saw what a difference it made when Off The Grid built their own generator instead of using an off-the-shelf model, they added an option for teams that want to go that route.

“They decided to make it a separate competition because of this Roger issue,” Pangle says. “It’s a great thing because I love to see the kids moving on and learning something new, but we can’t have those kids competing against an 8th grader with a stock turbine.”

Beale has also been drafted as an external advisor for James Madison University’s collegiate wind competition team, which is competing against other colleges from around the nation in an event hosted by the U.S. Department of Energy in Chicago next May.

“It’s like KidWind on steroids,” Pangle says. “There’s a lot more testing, and what they’re building is a lot more sophisticated.”

Beale’s excitement about that role is palpable. He created a closed Facebook group to communicate with the students and has been peppering them with ideas and suggestions.

“I really enjoy teaching kids about renewable energy,” Beale says. “That’s what I do.”