Up the mountain from an old-growth tulip poplar grove in southwestern North Carolina, shortly after the sun rose, a feasting snail at a tiny scale caught my eye. Amongst the leaf litter, reflecting a warm glow in the morning sun, the snail devoured a miniature orange mushroom. And then another. And another.

This snail may have been Fumonelix cherohalaensis, a new species catalogued by scientist Daniel Dourson in 2012. Dourson, an independent biologist, found several new snail species in the southern Appalachians that are endemic, meaning only found in a specific range, to certain mountains or counties. Dourson spotted this particular shell-spiraling species only at elevations above 4,500 feet along Cherohala Skyway of North Carolina — a ridgetop road beginning just a few miles away from where I found a snail munching its meal that morning. 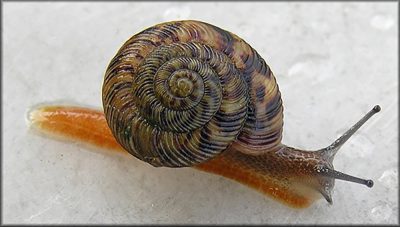 Two small antennae feelers just below their eye antennae lead snails — like this Appalachian tigersnail — to their food. Photo by Bill Frank, courtesy of jaxshells.org

Appalachia has an ancient heritage of diversity given the mountains’ resilience to ice ages. Through the eons, the mountains nurtured pockets of life that hosted plant and animal species during their centuries-long migrations away from glaciers. While small and slow, land snails managed this feat.

This region hosts up to 264 snail species — more than anywhere else in North America — and the most endemic species, according to Taylor Ricketts, a biology professor at the University of Vermont. The forests of the Blue Ridge Mountains alone foster 122 endemic land snail species.

Since snails are mostly nocturnal, they are most likely to be seen grazing in the early morning hours. A snail’s crawl is lubricated by a slimy mucus produced just below the mouth in humid air, usually during darkness or fog. Slugs, who also slime crawl, are considered their close cousins — a snail without a shell. Snails have a heightened sense of smell that will lead them to eat just about anything, from plants to animals to mushrooms to soil and rock particles, depending on their species and habitat. 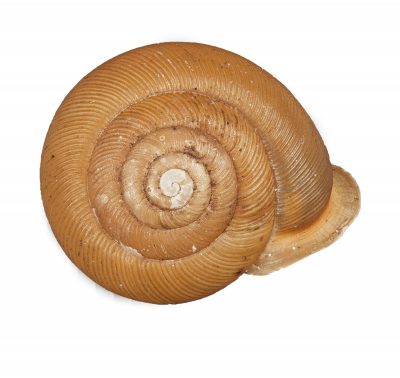 This Fumonelix cherohalaensis was found on Huckleberry Knob on the Cherohala Parkway. Photo courtesy of The Field Museum, 2017

But whatever their diet, snails’ food must have a significant amount of calcium to give their shell hardness. Some snails who eat mainly leaf litter favor trees with more calcium in their leaves, such as flowering dogwood or sugar maple.


Snail populations, and the species that depend on them, are affected by changes in the environment that deplete calcium from the soil, a 2002 study published in the Southeastern Naturalist indicates. Timber harvesting and acid rain cause calcium loss in the soil, hurting snail populations, sending ripples through the ecosystem. For instance, ground-foraging birds that feed on snails lose their source of calcium and then birth weaker eggshells, a 1994 study from the Netherlands found.

These terrestrial snails can provide important clues about land-use impacts in old-growth forests, such as Joyce Kilmer Memorial Forest in North Carolina — close to where I found my small snail munching its mushroom. Since slow-moving snails stick close to home, they are vulnerable to human-caused forest disturbances, according to Daniel Douglas, a scientist at Eastern Kentucky University. In a 2011 study, he found more snail species in old-growth forests than in second-growth forests and hypothesized that snails could be regional indicators of ecological conditions.

Although it is an eternal source of wonder why snails’ shells spiral, a group of Japanese scientists found that the spiral emerges during the embryonic stage of growth when the snail consists of only eight cells. To make baby snails, some mollusks don’t even need another spiral partner — most have both male and female reproductive organs. Science aside, these miniature creatures are enamouring with their petite spiral charm and have even inspired legends with their mystery.

The Snail and the Salamander

“Back in the long ago time before men, Salamander was a tiny snake and had no legs. He slithered about in creeks, under stones and in leaves that cover the forest floor.

One day he met snail, who at this time had legs, at the edge of a salt lick. Salamander knew what the lick was and laid on the edge watching other animals come and consume the salt. Snail had never been here before and had no idea what salt was.

Salamander looked at Snail’s nice legs and thought to himself how much he would like to have those for himself so he thought up a plan to kill slow-witted Snail and have those legs for himself. “Snail,” said Salamander,” look over there at that beautiful leaf across the clearing, bet it sure tastes good?” Tempted, Snail started walking across the salt, which began to immediately burn his soft body and burn holes in him. In moments the Snail laid dying and his legs fell off. As he was dying, he cursed Salamander as Salamander grabbed his legs and slithered away with them. “As long as you wear my legs, your body will be wet and soft just like mine and you will never lay in the sun again.” To this day, Salamander cannot sun himself but must hide in the damp darkness.”