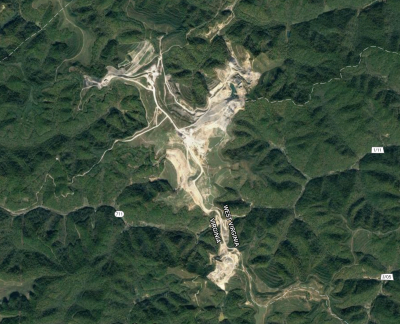 Elevation and topographical changes aside, reclaimed mountaintop removal sites look nothing like what was there before. Natural forests are gone, replaced mostly by grasslands and non-native vegetation. While these plants grow quickly and help stabilize the land that was stripped bare and compacted during the mining and reclamation process, they don’t provide anything close to the same type of habitat or ecological value of the forests they replace.


A new nonprofit organization, born out of the bankruptcies of Alpha Natural Resources and Patriot Coal, is hoping to bring native forests back to these lands, and restore streams that can support native aquatic life and insects.

“We are planning to restore approximately 250 acres over the next three to four years on unreclaimed mine sites, or sites that have been reclaimed but aren’t successfully growing native forests,” says Mike Becher, an attorney working for Appalachian Headwaters.

Appalachian Headwaters launched last year, funded by bankruptcy settlements with Alpha and Patriot to ensure those companies would live up to their environmental cleanup obligations.

Appalachian Headwaters is working with fellow nonprofit groups Green Forest Works and the Canaan Valley Institute on the reclamation projects. “Chris Barton from the University of Kentucky and Michael French with Green Forests Work are our technical experts,” Becher says. “They’ve developed techniques to make land conducive to regrowth of natural forests.”

The first step is to loosen soil on the reclaimed sites. Former reclamation standards required soil to be compacted to help control erosion. But compacted soil makes it difficult for roots to penetrate. The plan is to use bulldozers and other equipment fitted with ripping bars or teeth to loosen the soil to a depth of three feet.

The technique also involves adding nutrients and other additives to change the pH of the soil to make it more conducive to tree growth.

Then workers will plant thousands of trees — 300 to 400 trees per acre, Becher says.
The three nonprofit groups also jointly secured a $1.5 million grant from an Appalachian Regional Commission economic diversity initiative. That grant is funding work to bolster the region’s bee and native plant population.

This project will help train displaced Appalachian miners and other workers as beekeepers and provide financial startup assistance to get them started, as well as processing, marketing and packaging honey and other products. Others will be employed to collect seeds and grow native plants that aren’t available in most regional nurseries.

Becher says the bee and native plant project will also help with the reclamation initiative. Returning pollinators to the area is an important step, Becher says. “So much of the land has been disturbed and so much vegetation removed on these sites that pollinators have largely been eliminated,” he says.

Beekeepers will be encouraged to establish apiaries — bee yards — on the reclaimed sites.

In addition to bringing back native hardwood forests, the reclamation project will also work to restore streams on these sites. Often, natural streams have all been destroyed, replaced by drainage ditches filled with loose stone. Margaret Palmer, a biology professor at the University of Maryland and a stream restoration specialist, will be the technical expert for that part of the project.

The stream restoration will focus on lowering the conductivity of the water. This measure of how well water conducts electricity turns out to be a good indicator of how badly it has been polluted by strip mining. The goal is to lower pollution levels to the point that streams can support aquatic life and native insects.

The forest restoration will aid the stream restoration, Becher says. A renewed canopy will help maintain the correct water temperature in streams, and the trees will help filter pollutants out of the water. “If the forests are healthy, the water will be healthier,” he says.

Kate Asquith, director of programs for Appalachian Headwaters, is excited by the potential of the reclamation project. “These forests will never be the same,” she says. “The streams will be impaired for generations. We can’t make it what it was, but we can do a much better job than what has been done in the past.”