When most people think of maple syrup production, they picture a bucket hanging off a tree in Vermont, New Hampshire or some other New England state. But modern tapping involves miles of plastic tubing, not buckets — and a surprising amount of it is taking place in Appalachia, far from the Northeastern region best known for maple syrup. 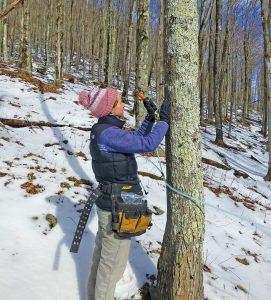 “The Appalachian Mountains are home to some large populations of sugar maples, especially in the higher elevations,” says Ryan Huish, assistant professor of biology at the University of Virginia’s College at Wise. “Historically, there was much more tapping in the region. You can still see names of roads, cities and geographic areas here that reflect the cultural significance of sugaring — Sugar Run Road, Sugar Grove, Sugar Hill, and so on.”

Mike Rechlin, a member of the board of the West Virginia Maple Syrup Producers Association, says mapling is seeing a resurgence in Appalachia. “The number of taps is expanding dramatically,” he says. “There are lots of people looking to get into the game.”

Dry Fork Maple Works in Randolph County, W.Va., which Rechlin helps operate, has 18,000 taps. “Traditionally, we hung buckets to collect sap,” he says. “The sap would flow out of a hole into a bucket, then you’d boil it down, adding nothing until the sugars are concentrated.”

Modern operations run a bit differently. “When you’ve got 18,000 taps, that’s a lot of buckets,” Rechlin says with a laugh. Today, plastic tubing runs from tree to tree to bring the sap down to a collection tank. While it’s possible to turn sap into maple sugar with nothing more than a pan and a heat source to boil it, Rechlin says commercial operations need to increase energy efficiency, so most use reverse osmosis filtering that concentrates the sugar in sap — about 2 percent when it comes out of a maple tree — up to about 12 to 15 percent before they start boiling it to create syrup. 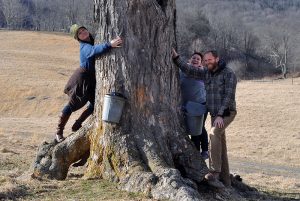 Ryan Huish enjoys the day with student researchers and a sugar maple in Bolar, Va. Photo by David Bruce.

“The reverse osmosis filtering removes water in advance to reduce energy consumption and save time,” Rechlin says. “The heat in the evaporation process also results in chemical conversions that result in that classic maple flavor and color.”

Those chemical conversions create a variety of compounds in the syrup — and researchers are studying them to determine whether they have any health benefits, Huish says. “Researchers are still finding new compounds in syrup, some of which show antimicrobial and anticancer properties,” he says. “Some may even be novel therapeutics to manage diabetes — compounds that help the body process sugars more slowly.”

Huish says sugar maples can be found from eastern Canada and down along the Appalachian Mountains as far south as North Carolina and Tennessee. “With more and more people recognizing the values of local roots and traditions — and the health benefits of maple syrup — there seems to be a resurgence of maple tapping beginning in the Appalachians, which is refreshing,” he says.

Neil Shinholt of S&S Maple Camp in Maryland isn’t part of any resurgence — he’s been making syrup for 58 years, since he was 10 years old. “My granpap had this farm in the ‘30s,” he says. “We raise beef and make syrup. These trees, I learn from them every year. When I was a boy, we only had a couple of trees tapped, all on buckets, and every day we had to gather sugar.”

Now the farm has about 9,000 trees tapped. Shinholt has seen a lot of seasons, and every one has been different. Weather is key. Sap flows best when temperatures are freezing during the nighttime and thawing during the day. 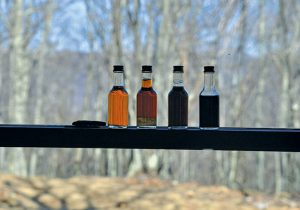 Different grades of maple syrup are displayed in a window. Photo by David Bruce.

During the summer, sugar maples produce carbohydrates from the sun’s energy through a process known as photosynthesis. Those carbohydrates are stored as starch in the trees’ roots, creating an energy reserve dormant trees use to kick-start growth in the spring. When cycles of freezing and thawing occur in the early spring, it creates pressure within the tree that draws water and dissolved sugars up through the tree to the buds. That’s the sap that taps collect.

“If you put a tire gauge in a hole in a maple, it will actually read the air pressure,” says Rechlin. “The hole in the tree relieves that pressure and causes the sap to flow out. Sap flow 101: no freeze and thaw cycle, no tap flow.”

That puts a definite crimp in the business. “Last year, we had a different kind of winter,” Shinholt says. “It didn’t get cold until late in the year. Temperatures were getting so warm in the day, up to the 70s. That’s something you don’t want. The water was cloudy coming into the tank. It had already ruined the flavor of the syrup, so we quit. Northern people were having ideal weather. They had a great year.”

A lot of different factors go into creating a good sap harvest, Shinholt says. The best he can remember in recent years was 2014. “The weather was perfect,” he says. “We just had to keep buying barrels. It’s the temperature fluctuation that makes the sugar flow. The ideal temperature is 25 at night and 45 during the day. You want wet, sloppy ground, too. Trees won’t produce if the soil’s dry.”

With the harvest so dependent on weather, it’s natural to wonder about the impact of climate change, which has resulted in record-breaking temperatures the last three years in a row. Shinholt has seen some changes during his lifetime. “I’m not going to say that I see temperatures warming,” he says. “But I do see that there are more of the prolonged cold and warm spells. And maples don’t operate in that kind of weather. A prolonged warm spell is really bad. Once the tree goes dormant, each warm day after that sap moves up from the roots to the bud pocket and it will eat some of that sugar. You want it to stay cold until the spring when things are starting to come back to life.”

The impact of climate change on the industry worries Rechlin, a native of upstate New York who’s lived in West Virginia for the last six years. “That is the $64,000 question,” he says. “I haven’t been down here long enough to answer that question, but I’ve been down here long enough to know we need to ask it. We need to have more serious research on some of those climatic issues here to be comfortable expanding the industry. The harvest was terrible last year because of the weather. We went 15 days without a freeze/thaw cycle in what should have been prime sugaring season.” 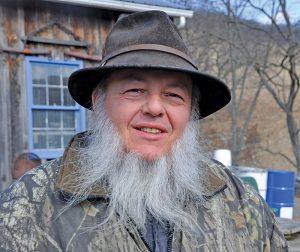 Huish says such concern is understandable, and climate change could definitely have impacts on the sap harvest. “Maple tapping is very dependent on the climate,” he says. “The sap won’t flow if conditions aren’t just right.” But he doesn’t believe the Appalachian industry is in mortal danger, at least for now.

“I see maple syrup production continuing in the Southern Appalachians for a long time — maybe even centuries,” Huish says. “However, there could be some threats to the southern [tree] populations that could jeopardize successful tapping in the very long-term. There are some climate projection models that suggest sugar maple may not prefer the climate so much in our neck of the woods in the future.”

Climate change could impact the quality of the syrup, as well. “When plants get stressed out, their defense mechanisms kick in, and their chemistry changes,” Huish says. “It is still unclear exactly how and to what level this is influencing the syrup, but we are investigating this.”
Huish is part of the Acer Climate and Socio-Ecological Research Network, a team funded by the U.S. Geological Survey and Northeast Science Center, with scientists from the University of Massachusetts, Dartmouth College, University of Quebec and Montana State University. The ACERnet team is looking into potential strategies for sap harvesting and syrup production in a changing climate.

Meanwhile, the market for Appalachian syrup and other maple products is booming. “The market is a great, great market,” says Shinholt. “The market is diversifying. People use maple syrup for a lot more than just pancakes. Some folks are even taking the water from the tree, pasteurizing and bottling it. People are drinking that. It’s supposed to be good for you, there are so many great things in this water for the human body.” 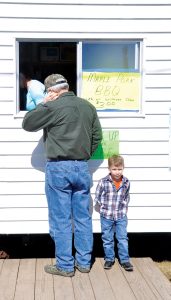 Huish believes southern Appalachian maples may have higher concentrations of antioxidants and other phenolic compounds — and some people say it has more flavor. “Many people we’ve spoken to from both the north and the south have mentioned the southern syrup tastes better,” says the researcher. “Of course, that’s just anecdotal, and ongoing research will need to confirm this. We are still eagerly collecting and analyzing data.”

Last year, demand outpaced supply in Appalachia, Rechlin says. “Demand is good and growing as more people learn that we actually make it here,” he says.