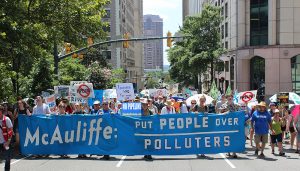 Despite record-breaking heat — or maybe, in part, because of it — more than 600 people turned out for a “March on the Mansion” in Richmond on July 23. Their aim was to tell Gov. Terry McAuliffe to stand against fossil-fuel polluters and stand with people who are fighting fracked-gas pipelines, toxic coal ash and climate change. 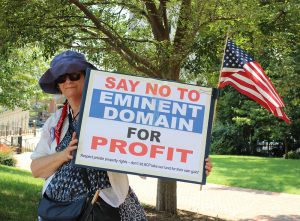 A participant in the July March on the Mansion. Photo courtesy of Chesapeake Climate Action Network

The first-of-its-kind climate justice rally in Virginia brought together people from Norfolk to Northern Virginia to the New River Valley who are directly impacted by dirty energy policies that Gov. McAuliffe supports. Farmers whose land is threatened by the proposed Atlantic Coast and Mountain Valley pipelines marched shoulder-to-shoulder with Virginians whose drinking water is polluted by coal ash or whose homes are being flooded by rising seas.

The march follows an open letter to the governor from 60 landowner, faith-based, student, social justice and conservation groups last month that laid out a vision for affordable clean-energy development that matches the scale of the climate crisis, gives local communities a voice and advances social, racial and environmental justice.