Endangered Species and Habitats of Appalachia

Central and southern Appalachia are renowned for their rich biological diversity. The temperate forests are home to thousands of species of plants and animals, many of which are found nowhere else on earth.

But according to Tierra Curry, a senior scientist for the Center for Biological Diversity, Appalachia is a “unique place where one of the highest biodiversity levels in the world overlaps geographically with some of the most destructive land use practices in the world.” 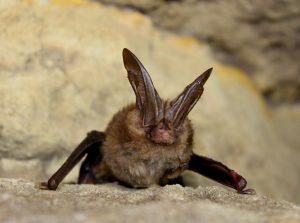 Virginia big-eared bats are found in isolated colonies in limestone caves across central and southern Appalachia. This bat is endangered largely because of loss of habitat and human disturbance. Photo by Larisa Bishop-Boro

Part of what makes the Appalachian region so special are its varied ecosystems, such as the southern Appalachian mountain bog and the high elevation red spruce forest.

“There are species adapted exclusively to our cooler, higher summits, while others spend their entire lives on isolated rock faces deep within river gorges,” Walter Smith, assistant professor of biology at the University of Virginia’s College at Wise, wrote in an email.

According to Smith, the spruce-fir forest is a particularly fragile environment, susceptible to effects of climate change. As temperatures rise, these cold-loving forests retreat farther up the mountain sides and eventually will reach the tops of the mountains and run out of habitat. 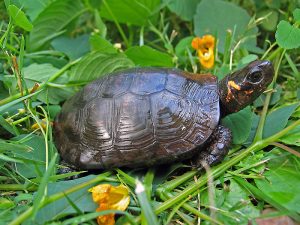 The tiny bog turtle lives in marshes and bogs across the eastern United States. Both the northern and southern populations are threatened with extinction. Photo courtesy of the U.S. Fish and Wildlife Service

These forests are home to the endangered spruce-fir moss spider. According to the U.S. Fish and Wildlife Service, this tiny arachnid measures only 0.1 inches across and its habitat is “restricted to small areas of suitable moss mats on a few scattered rock outcrops and boulders beneath fir trees in the spruce-fir forests.”

Such vulnerable creatures are protected by the Endangered Species Act, which the U.S. Congress passed into law in 1973. Its main purpose was to provide protection for species at risk of becoming extinct and to protect the ecosystems in which they live. The U.S. Fish and Wildlife Service is charged with implementing the act for land-based and freshwater species.

The act expanded previous protections provided to endangered species and allowed plants and invertebrates to be classified as “endangered” or “threatened.” The law also required federal agencies to conserve endangered species while prohibiting the agencies from damaging the habitats on which those species depend. 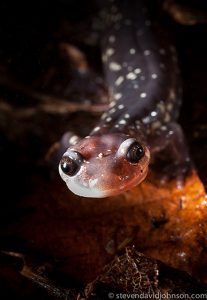 States also have an active role in conserving the wildlife within their borders, and the act outlines a framework for this collaboration and established sources of federal funding that continue to help offset the costs of state initiatives.

The Endangered Species Act can be used to protect — or not protect — very specific classifications of plants and animals, such as subspecies of flying squirrels.

The Carolina northern flying squirrel is federally recognized as endangered and is a rare subspecies of flying squirrel found only at high elevations in western North Carolina, Southwest Virginia and East Tennessee. This nocturnal mammal reaches up to 12 inches in length and glides, rather than flies, on flaps of skin that extend from its outstretched arms. It is primarily threatened by loss of habitat, introduction of foreign pests and expansion of residential and recreational spaces.

According to the Smithsonian Conservation Biology Institute in Washington, D.C., more species of salamanders live in the varied altitudes and freshwater ecosystems of Appalachia than anywhere else on earth.

However, populations of amphibians — including many salamanders — are declining rapidly, though the specific causes of this decline are unknown. Factors such as climate change may play a role in the loss of lungless salamanders that breathe through their skin and are particularly sensitive to water quality, changes in temperature and moisture levels.

In February, the U.S. Forest Service rejected a 10-mile segment of the proposed Atlantic Coast Pipeline — which would carry natural gas from West Virginia to Virginia and North Carolina — in order to protect critical habitats along its route. The habitats of the rare, spotted Cow Knob salamander and the brassy-flecked, threatened Cheat Mountain salamander would have been destroyed.

But another subspecies — the West Virginia northern flying squirrel — lost its protected status in 2008 after the U.S. Fish and Wildlife Service determined that there was no longer a risk of extinction. This decision was challenged in court by Friends of Blackwater, a nonprofit conservation organization, and a U.S. District Court overturned the initial ruling. This flying squirrel was then returned to the endangered species list in 2011. The USFWS appealed this decision and an appellate court ruled in its favor, and in 2013 this subspecies was again removed from the endangered species list.

Central to this case were competing methodologies for estimating the size and health of the flying squirrel population. But each species considered for protected status will bring its own specific circumstances that will need to be debated.

Water is the Source of Life

The streams of Appalachia are particularly stressed, both Curry and Smith note. “These habitats are really being hit from all angles in terms of threats to biodiversity,” Smith wrote in an email. “This includes impairments in water quality from sedimentation, chemical pollution and septic waste, as well as impacts from the historical damming of many rivers across the Appalachian region.”

These streams are home to thousands of species whose habitats are now fragmented, shrinking and polluted.

“Water is the source of all life,” says Curry. “All of the animals either live in the water, near the water or they drink the water. And the water quality also affects the human community. So, water is the common thread that ties everything together.” 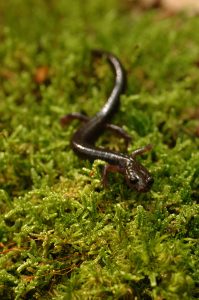 One creature that depends on these streams is the diamond darter. This translucent silver fish buries itself in sandy river bottoms to avoid predators and is recognized by the U.S. Fish and Wildlife Service as one of the most endangered species of fish in the Southeast. This member of the perch family reaches no more than five inches in length and is most active at dawn and dusk.

Poor water quality and sedimentation, as well as the fragmentation of its habitat due to the construction of dams, has severely reduced this darter’s numbers. Once found in Kentucky, Ohio, Tennessee and West Virginia, the only surviving diamond darter population is now restricted to the Elk River of West Virginia. And the watershed of the Elk River is affected by such harmful practices as mountaintop removal coal mining, natural gas drilling and timbering, all of which impact water quality and thus further threaten the diamond darter.

The U.S. Fish and Wildlife Service extended protection for two Appalachian crayfish in April. The Big Sandy crayfish is now recognized as threatened and the Guyandotte River crayfish as endangered.

According to a statement from the Center for Biological Diversity, one of the biggest threats to both species is mountaintop removal coal mining because of the pollution and sediment that fill affected streams and rivers. The Big Sandy crayfish lives in eastern Kentucky, Southwest Virginia and southern West Virginia. The Guyandotte River crayfish’s habitat has shrunk to a single river basin in southern West Virginia.

Citizen groups hope to redirect the route of the proposed Mountain Valley Pipeline to protect three other species of rare crayfish. The USFWS is considering one species, the Elk River crayfish, for endangered status. Scientists have just recently discovered the other two species.

Mountain streams are also home to numerous species of endangered freshwater mussels, such as the Appalachian Monkeyface. Now found only in sections of the Powell and Clinch rivers of Virginia and Tennessee, this filter-feeding mollusk is losing its habitat from the construction of dams and is being poisoned by sediments and toxins in the water.

Groups such as the Center for Biological Diversity, a nonprofit organization based in Tucson, Ariz., are working hard to expand federal protection to as many endangered and threatened species as possible. While the group continues to petition the U.S. Fish and Wildlife Service to have new species considered for protection, a 2011 settlement with the agency is also ensuring that decisions are being made about the status of species that have been on the agency’s candidate list, sometimes for many years. 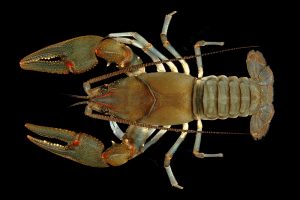 The Big Sandy crayfish is one of two Appalachian crayfish now protected under the Endangered Species Act. Photo by Guenter Schuster

According to Curry, a scientist with the organization, there’s a correlation between helping endangered species and helping the human populations around them.

“The things that threaten the endangered species also threaten the health and wellbeing of the human communities,” says Curry. “It’s really frustrating to me, as a native Appalachian, that we can’t petition directly to protect the people who are threatened by the same factors. … Protection for the species’ habitat is also going to directly benefit the people who live there.”

Efforts to preserve the wild creatures and places of Appalachia help preserve what makes the region so special.
“These organisms and habitats rank right up there with our region’s culture, music, and human heritage,” wrote Walter Smith. “It’s equally crucial that we preserve our natural heritage alongside our way of life.”