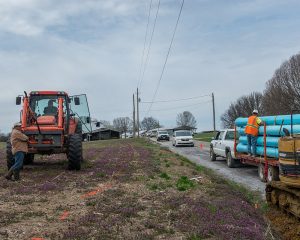 Jack Renner sits in his tractor as workers with U.S. Nitrogen start digging to install the pipeline on his land against his will.

A Bridge Over Troubled Water
By Lorelei Goff

Winding southwestward from the North Toe River in Avery County, N.C., the Nolichucky River transitions between a wide, placid ribbon, a narrow torrent of whitewater and a shallow, dancing shoal during its 115-mile course into East Tennessee. Its waters have long been troubled by sediment and runoff from poor agricultural practices, radioactive waste from the Nuclear Fuels Systems plant in Erwin, Tenn., and pollution from other human impacts that have threatened its beauty, diverse ecosystems, recreational opportunities and use as a public water source.

A new threat was proposed along its banks in 2011. Industrial explosives manufacturer U.S. Nitrogen eyed the site of the historic Conway Bridge, which joins Greene and Cocke counties in Tennessee, for a 12-mile dual pipeline. The pipeline will pump up to 1.9 million gallons of water from the river to the company’s ammonium nitrate plant and return 500,000 gallons of effluent daily. The subsidiary of the Austin Powder Company, which supplies explosives for mining operations, plans to operate two ammonia plants, a nitric acid plant and an ammonium nitrate solution plant at the site. A calcium nitrate plant operated by Yara International and a carbon dioxide recycling plant to be operated by an unnamed company are planned at the same location.

Controversies marked the construction of the pipeline, including alleged conflicts of interest by local officials and lawsuits over right-of-ways, trespassing and open meetings violations. These controversies and concerns about the river — ranging from the fate of the endangered Appalachian elktoe mussel, air and water quality, and the lack of an environmental impact study — are bridging social and cultural gaps between predominantly liberal environmentalists, conservative landowners and apolitical residents.

According to Bryant, she sees the fight for the river as a “fight against tyranny” and hopes her ancestor would be proud of the group for defending it. But she says it’s the environmental concerns that are bringing folks together. 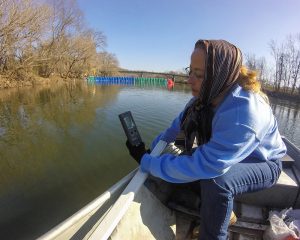 Ann Calfee of Save the Nolichucky measures the pH of the river below a U.S. Nitrogen work site in December 2014. Photos by April Bryant, aprilbryant.com

“Our well is less than 300 yards from where the pipeline goes into the river,” she says. “There are limestone caves and sinkholes … so I’m sure that water from the river works its way all around under the ground to our wells. My kids drink out of that. Who’s going to check it?”

CWEET, or Clean Water Expected in East Tennessee, is an environmental advocacy group that works for clean water and other social justice issues in the region. The group partners with the nonprofit environmental research laboratory Environmental Quality Institute to conduct chemical and biological water monitoring on the Nolichucky. The groups have completed two rounds of testing to gather baseline data before operations at the plant begin and will continue sampling on a quarterly basis with the help of volunteers.

Ann Calfee is a director of Save the Nolichucky and a plaintiff in a pending lawsuit against the Tennessee Department of Transportation, U.S. Nitrogen and the Greene County Industrial Development Board. The suit questions the legality of permits that allowed the pipeline to be installed in state highway right-of-ways reserved for utilities that serve the public. Calfee says residents are volunteering with CWEET because of concerns about how the plant’s operations will impact the health of the river.

“Our main concerns are what will happen to the aquatic life, the vegetation and the wells,” she says.

CWEET’s director, Deborah Bahr, sees the local efforts as part of a larger grassroots movement to preserve the area and demand high-quality jobs that don’t harm the community. One local teacher created an Advanced Placement class that will give students an opportunity to take part in water testing. Bahr says she hopes CWEET will become a water testing resource for other communities that have concerns about their waterways.

Though the troubled waters flowing under the Conway Bridge are still at risk, the impact on community engagement in environmental and social justice issues in the area has been positive.