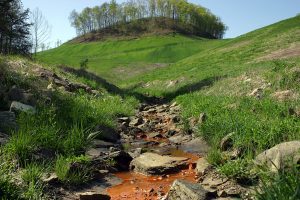 Polluted water flows from a reclaimed surface mine in Kentucky. The congressional appropriations process could affect whether regulators can finalize a new rule designed to protect waterways from some of the damage caused by coal mining. Photo by Matt Wasson

Before leaving Congress, House Speaker John Boehner worked with the Senate and the White House to reach a federal budget deal. While few members of Congress are happy with all of the specifics of that deal, the fact that the country isn’t facing another government shutdown is widely accepted as a good thing.

Passing a budget and passing an appropriations bill, however, are not the same thing. A budget sets a total spending limit and allocates a specific amount to mandatory and discretionary spending. Mandatory spending includes benefits like Social Security, Medicare, and food assistance programs, while discretionary comprises nearly everything else, including spending allocations for the military, education, and federal regulatory agencies like the U.S. Office of Surface Mining, Reclamation, and Enforcement.

The appropriations bill decides how much money is allotted to each individual agency, even down to the separate departments within the agencies. As such, the appropriations bill has enormous implications for agencies like the OSMRE. Congress can cut the agency’s budget by allocating the money to a different agency, and can also include amendments to limit OSMRE’s actions. For instance, Congress will likely give the agency approximately $130 million. But legislators can also add amendments, or “policy riders,” that can tell OSMRE they are not allowed to spend a single dollar on a specific action.

OSMRE is currently working on completing the Stream Protection Rule, which is intended to limit the impacts of surface coal mining on streams. Coal industry advocates in Congress are trying to pass the STREAM Act, H.R. 1644, which would take away the agency’s legal authority to complete the rule. If that tactic fails, however, Congress could instead attach a policy rider to the appropriations bill that would prohibit OSMRE from using their funds to complete the rule.

In other words, the OSMRE could still have the legal authority and the total money necessary to complete the Stream Protection Rule, but Congress can take away their ability to use their funds to complete the rule. The effect, at least in the short term, would be the same as passing a standalone bill like the STREAM Act that blocks the rule.

The appropriations process is meant to allocate money, not act as legislation. However, Congress has frequently used it as a tool to counter actions from the executive branch, especially when Congress and the White House are held by different parties as they are now. Political analysts on both sides of the aisle are expecting to see dozens of anti-environmental amendments offered that would, among other things, prohibit the OSMRE from completing the Stream Protection Rule and prohibit the EPA from enforcing the Clean Power Plan to reduce carbon dioxide emissions from power plants. The chances that such amendments will pass remains unclear.

Aside from telling agencies what they can’t do, legislators also have opportunities to fund new projects like the POWER+ Plan, an economic revitalization package proposed by the Obama administration that is aimed at assisting regions affected by coal’s decline (see page 20 for details). Through this plan, Congress can focus existing funds to projects that would create jobs in Appalachia by reclaiming abandoned mining sites, retraining former miners and coordinating economic transition work throughout the region — all without increasing overall government spending.

Appalachian representatives will have major influence over the final appropriations bill. Congressman Hal Rogers (R-Ky.) is the chairman of the House Appropriations Committee, and Senator Mitch McConnell (R-Ky.) is the Senate Majority Leader. The POWER+ Plan would direct money to eastern Kentucky, which Rep. Rogers represents, so both he and Sen. McConnell have an interest in making sure Kentucky gets that money. On the environmental side, the Stream Protection Rule would alter regulation of the coal industry in Kentucky, and, along with the coal industry, Rep. Rogers and Sen. McConnell oppose the new regulations.

As of press time in late November, the future of the appropriations bill was cloudy, and answers about how the final bill will affect the environmental and economic programs in Appalachia are still unknown. While much of the debate happens publicly, real negotiations usually happen behind closed doors. In both instances, the people of Appalachia have an opportunity to speak out and ensure that their voices are reflected.