Brewing Biofuel On the Farm 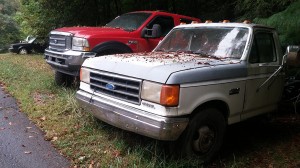 Dean Vaughn’s diesel trucks — plus his farm equipment and several past vehicles — are all powered by his homemade biodiesel. Photo by Dean Vaughn

Dean Vaughn is the picture of the Appalachian self-made man. He works at a factory and farms his land in Tennessee. And he also built and runs his very own biodiesel fuel processor.

Biodiesel is a renewable alternative to petroleum-based fuels. Made from corn or soybean oil as well as used cooking oil or animal fats, this degradable biofuel will run in most diesel-powered engines without any modification to the vehicle. Unleaded fuel cars with rubber fuel lines, typically those manufactured prior to 1993, can convert to using biodiesel by replacing their fuel lines with modern synthetic lines.

Vaughn uses his biodiesel for his farm equipment and trucks, and used to have a diesel Jetta and Mercedes that ran on his fuel. He began making his own fuel at the height of the economic crisis in 2008. He calculates his finished product to cost about 75 cents a gallon, – upwards of three dollars less than the sky-high gas prices at the time. Though saving money played a role in why he started making fuel, he adds, “I got a kick out of making something usable out of trash.”

Recycled cooking oil is the main ingredient, making Vaughn’s method of production more sustainable than other biodiesel methods. When mass producers plant corn in industrial agricultural farms for use in biodiesel, for instance, they require more natural resources like land and water.

Vaughn gets his recycled oil from a local hospital cafeteria. When a cafeteria employee told him that the hospital was paying a company to haul off the waste oil, he told her “I’ll keep your oil clean and your place clean, and you don’t need to pay anybody.” Thus, a symbiotic relationship emerged.

“Brewers” of biodiesel use a process called transesterification. Like the word itself, the process is complex, but Vaughn already understood the concept from working at a chemical company. “It’s been so many years now, I kind of sleep-walk through the steps,” he says. 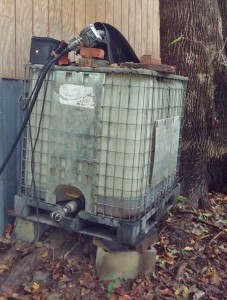 First, methanol is mixed with lye to make methoxide. This chemical, when combined with the waste oil at a ratio of one part methoxide to four parts oil, acts as a catalyst and separates the unneeded glycerin from what will soon be the fuel. When the mixture is heated to 120 degrees in a processor Vaughn fashioned out of an old water heater, the separation process takes about an hour and a half.

After draining the glycerin, “it kind of looks like orange juice,” Vaughn says. This cloudy appearance stems from impurities remaining in the mixture. To remove these, Vaughn runs water through misting heads, like those in the produce section at the grocery store, for six hours. The water molecules attach themselves to the impurities. In the final step, he lets the mixture circulate at 120 degrees to evaporate the water. “You can do it in one day,” he says, and voila — biodiesel.

According to the EPA, biodiesel produces 57 to 86 percent less greenhouse gas emissions, depending on the blend, than petroleum. Biodiesel also releases fewer pollutants from a car’s exhaust pipe than petroleum.

“The chemistry’s different,” he says, “but it’s like a work in progress; you have good batches and some that don’t work out as well.” He is still learning and making changes. For example, he warns, “You don’t want to use 100 percent biodiesel in the winter.” The cold weather will cause the fuel to gel, rendering a vehicle inoperable. This he learned the hard way.

The solution: blending petroleum-derived diesel and biodiesel. Most biodiesel plants produce a blend with about five to twenty percent biodiesel. In the summer, Vaughn’s vehicles run on 100 percent.

Preferring to work in the spring, Vaughn will undertake his 72 gallon-producing process several times and store the fuel in the summer. He has 550 gallons of storage capacity. “If you don’t have acreage,” he says, “it can be a bit of a headache.”

Biodiesel newcomers lacking the space to produce on their own shouldn’t look to Vaughn to purchase some, however. “I’ve never been interested in the liability,” he says. “It’s just me. What I do. My thing.”

For more information on how to make biodiesel, visit make-biodiesel.org.