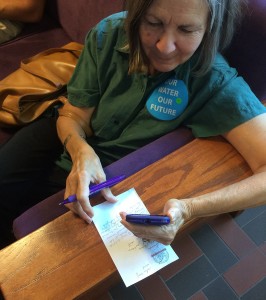 In September, residents of mining areas, coal industry representatives and others gathered at six public hearings to submit comments on a proposed rule that would restrict mining impacts to waterways. These hearings were held in Lexington, Ky., Big Stone Gap, Va., Charleston, W.Va., Pittsburgh, St. Louis and Denver.

The federal Office of Surface Mining Reclamation and Enforcement’s proposed rule is intended to limit and mitigate impacts to streams resulting from mountaintop removal coal mining, an extraction method where the tops of mountains are blasted off and dumped into adjacent valleys in order to access underlying coal seams. The draft rule aims to accomplish this by clarifying what constitutes damage to waterways, raising baseline water monitoring standards, mandating more stringent bonding requirements for surface mining and restricting and clarifying when states may grant exceptions to stream protections.

Approximately 250 people were present at the hearing in Big Stone Gap on September 15. Community members from the coalfields of Virginia, Tennessee and Kentucky spoke out in favor of strengthening stream protection measures, often emphasizing the failings of current enforcement by state agencies. “Despite rules and laws, tons of waste are dumped into these waterways regularly. How does this happen?” said Mary Darcy from Wise, Va. “Do the states not enforce clean water regulations? Do our elected representatives turn their backs on the needs of the people with something as critical as water?”

Diana Withen, a local high school biology teacher and board member of Southern Appalachian Mountain Stewards, implored the agency to include clear language allowing for citizen monitoring and enforcement. “We know that government budgets are tight,” she said to the panel. “So allowing concerned citizens to help monitor the water quality in our streams makes sense.”

Countering the many who spoke out for clean water, politicians and industry representatives suggested the rule is not needed and is motivated purely by politics. Rep. Morgan Griffith of Virginia’s 9th Congressional district described the rule as part of a war on coal, and characterized the stream protection supporters as caring more about insects than human beings. 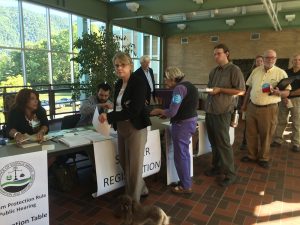 Scott Barton, a mine superintendent at Murray Energy’s Harrison County Mine in northern West Virginia said, “The Obama administration hides behind the myth of global warming to justify its job-destroying agenda. Everyone in the coal industry knows this is a lie.”

Adam Malle from Big Stone Gap spoke in favor of strong regulations as essential to current and future economic development. “We need these rules precisely because of the loss of jobs,” said Malle. “We need to ensure that our mountains, our waterways, our streams are available to us, the citizens of this area, to create a local, sustainable economy around non-timber forest products, around tourism, around all the diversified options that are becoming available to us at this time.”

The public comment period for the Stream Protection Rule was extended in response to industry requests and will remain open until October 26. To add your voice, visit ilovemountains.org/spr-comments