By Joe Tennis
All over the Appalachians, railroads were built in the late 1800s and early 1900s as a means to move coal, timber and people. More than a century later, with expansion of highways and a change in industries, many of those railroads have since been abandoned.

Now, from the Virginias to the Carolinas, old rails have turned to trails. What were once rail lines have become paths for hiking, biking and even horseback riding. Such projects range from the 34-mile downhill grade of the Virginia Creeper Trail to the river-hugging path of the New River Trail State Park, spanning 57 miles, to the relatively flat 78 miles of the Greenbrier River Trail in West Virginia.

Each rail-turned-to-trail has a tale to tell. Here are three, including some that are new and maybe lesser-known: 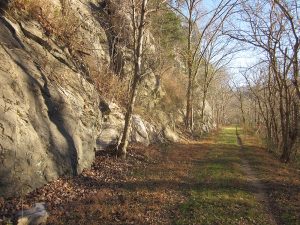 Chessie Nature Trail follows a path along the Maury River that has been fractured by floods. Its bridges have been broken. Still, the Chessie, which connects Lexington to Buena Vista, remains a remarkable riverside ramble — with chiseled rock walls and scenic views.

Spanning about seven miles, this gravel and dirt path offers a mix of open and forested scenes. Look along the Maury River for the remains of locks and dams. Also see railroad markers, like a “W” (a signal for the engineer to blow the train whistle) that stands along the trail amid cows in a field.

As early as 1860, this line began as a towpath for boats — using the power of mules and horses — at a canal along the North River, which was renamed Maury River in 1945. That towpath was abandoned due to flooding, but a railroad was built in its place in 1881, connecting Lexington to the Balcony Falls on the James River.

That railroad ultimately became part of the Chesapeake and Ohio Railway. Trouble was, floods continued along the river. Hurricane Camille damaged the line so extensively in 1969 that the railroad to Lexington was abandoned.

In 1978, the Nature Conservancy acquired the railroad grade. Later, the rail became a trail overseen by the VMI Foundation initially, in 1979, and later by Virginia Military Institute in 2009.

Originally only open to foot traffic, bicyclists are now also welcome, even though the Buena Vista portion of the trail remains a tough trek when encountering cattle gates.

On the north, the trail begins near Mill Creek just off Old Buena Vista Road, east of U.S. 11. Originally, the trail connected to what is locally called “VMI Island,” but a flood wiped out a footbridge. Later, Hurricane Isabel slammed the South River crossing in 2003, about halfway between Lexington and Buena Vista, which forced trail-users to use an on-road detour on Stuartsburg Road.
Visit: vmi.edu 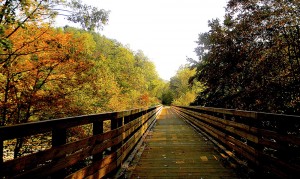 At 18 miles long, the Dawkins Line Rail Trail ranks as the longest rail-to-trail conversion in Kentucky. It’s also an affiliate of the state park system.

“We own anywhere from 30 to 60 feet from center of the trail,” says Ron Vanover, assistant director of interpretations and program services at Kentucky State Parks.

The first section of the trail opened in 2013, offering a passage for bikers, hikers and horseback riders from Hagerhill in Johnson County to Royalton in Magoffin County. Along the way, the passage travels over a couple dozen trestles and passes through the 662-foot-long Gun Creek Tunnel.

Dozens of rail-trails are scattered across central Appalachia. For more information about these and other trails in the region, visit traillink.com. — Compiled by Elizabeth E. Payne

Now, work continues on expanding the trail. Nearly nine more miles are expected to be open by the end of 2015 while another nine miles will remain under construction in 2016, passing into Breathitt County and through the 1,556-foot-long “Tip Top” Tunnel, Vanover says.

The trail takes its name from the Dawkins Lumber Company, which developed a railroad in the early 1900s to haul timber. The line was silenced to rail traffic in 2004. Next came plans to turn the rail into a trail — with the encouragement of the Kentucky General Assembly, which approved start-up funds for the project.

Today, you can view elk from this trail as it cuts through the rugged mountains of the Bluegrass State. The Dawkins Line Rail Trail can be accessed from a handful of sites, including Jenny’s Branch. To get there from Pikeville, Ky., follow U.S. 23 north for 34 miles. Turn right toward KY-825, then turn left onto KY-825 to reach the trail access area.
Visit: parks.ky.gov 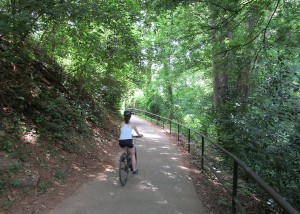 Today, what was once a railroad cutting through Greenville has been replaced by what is formally called the “Greenville Health System Swamp Rabbit Trail.” This multi-use greenway system for bicycles and foot traffic runs along the Reedy River and overlooks the giant waterfall on the river at the center of the city. It also connects Greenville County with schools, parks and local businesses.

As early as 1889, a group of businessmen gathered to create a new venture called the Carolina, Knoxville and Western Railway. Their purpose? Connect Greenville, S.C., with the ports on the Atlantic coast, as well as Tennessee.

Passengers, however, came up with a new name, calling this railroad the “Swamp Rabbit” — a moniker given, it’s believed, from the wetlands along the Reedy River and the bouncy nature of riding these rails.

For about a century, the railroad changed hands — and names — quite frequently. Then the line was abandoned in 1998 and the property acquired by Upstate Forever, a nonprofit group. Greenville County Economic Development Corporation later stepped in as plans evolved, building a trail from the old rail line. Volunteers also hopped aboard, working to remove vegetation and clear the path for a trail.

The ever-expanding trail between Greenville and Travelers Rest spans nearly 20 miles and has about 500,000 annual users.

“It kind of gives you the option to exercise and …see the entire city,” says 29-year-old Eric Helms, a frequent trail user and a restaurant manager in Greenville. “It’s a long trail, and you can … drop off the trail and stop and see the Reedy River.”

Parking is available at several sites, including the corner of Grandview Road and Main Street in Travelers Rest and at Furman University, Mayberry Park and Cleveland Park in Greenville.
Visit: greenvillerec.com/swamprabbit 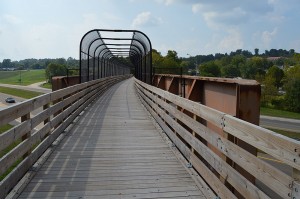 Open since 2014, the Tweetsie Trail in eastern Tennessee links Johnson City, the home of East Tennessee State University, to Elizabethton. Bikers and walkers can access the seven-mile-long trail from a Johnson City parking area at the intersection of Legion and Alabama streets. From here, the trail rolls downhill — first passing big rock cuts and then, almost immediately, crossing high above Sinking Creek. Within the first half-mile, the trail crosses over U.S. Highway 321 on a bridge that includes a fenced canopy.

Cruising into Carter County, the trail passes a mix of woods, fields, businesses and residences. It slips past Sycamore Shoals State Historic Area before concluding in Elizabethton near the Betsytowne Shopping Center.

This route was once known as the East Tennessee and Western North Carolina Railroad, using the initials “ET&WNC,” which connected Johnson City to Boone, N.C.

Folks invented at least a couple of nicknames, with some claiming those initials should really stand for “Eat Taters and Wear No Clothes.” Others, meanwhile, called this “Tweetsie,” saying that’s what the locomotive whistles seemed to say as they blew and echoed in the rocky mountain corridor along the Tennessee-North Carolina border.

Trains stopped running on the rail line between Johnson City and Elizabethton in 2003. About four years later, the dreams and visions of civic leaders and a nonprofit group, Friends of the Tweetsie Trail, began to turn the trail into a reality – thanks to monetary donations by individuals, businesses and local governments.