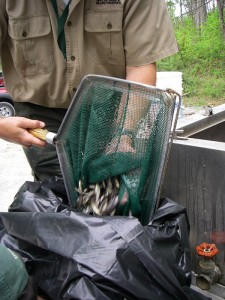 Fishing is a favorite pastime throughout Appalachia, and as such the demand for fisheries is ever-rising. Among the many attempts to introduce trout into regional waterways are the efforts by Trout Unlimited, a group that has been stocking trout in streams across the nation.

Mark Leonard, the president of a Trout Unlimited chapter in Virginia that oversees Stony Creek and Mountain Fork River in the southwest portion of the state, has worked with the Virginia Department of Forest and Fisheries to help introduce tens of thousands of trout into the two streams.

“We get a group together and line their backpacks with contractor-grade trash bags,” says Leonard. “Then we fill each pack up with four to five gallons of water and a few hundred fingerling trout, hike a mile upstream and release them into the stream.”

In 2010, the first year Leonard’s chapter carried their cargo upstream, they released 30,000 brook trout in Mountain Fork River and 20,000 brown trout in Little Stony Creek. Each year they reduce the number of trout they introduce in an effort to encourage fish reproduction; their most recent delivery was half of what it was five years ago. While brown trout aren’t native to America and can even edge out the native brook trout, state fisheries biologist Jeff Williams says that the introduction of brown trout in Little Stony Creek isn’t a problem because trout weren’t native to these two streams in the first place.

“If this stream had already had a native brook trout population, we would only be stocking brook trout,” says Williams. “We only stock brown trout in the warmer Little Stony Creek, since they are more tolerable of higher temperatures, and we only stock brook trout in Mountain Fork.”

“The habitat to support a trout population was there, along with the desire to provide a fishable population for anglers in the area,” he says. “Eventually we hope the trout will ultimately start reproducing and establish self-sustaining populations.”

In addition to stocking streams, Trout Unlimited hosts a Trout in the Classroom program in local schools to teach biology and coldwater conservation. The schoolchildren raise the fish from hatchlings to fingerling size, releasing them at the end of the school year.

“We take them for a nature hike out to the stream at the end of the year and teach them about aquatic life, how to use a fly rod, and do a scavenger hunt,” says Leonard. “You’d be surprised how many kids in the area have never been out in the woods.”