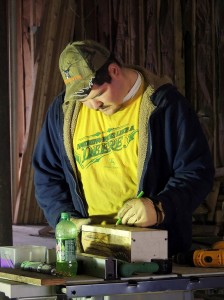 As Appalachia suffers through the effects of yet another downturn in the coal industry, a number of organizations are stepping up efforts to create jobs, retain young adults in the region and better educate the workforce.

“It’s a challenging environment, for sure,” says Brandon Dennison, executive director of Coalfield Development Corp., an organization devoted to revitalizing the local economy in Wayne, Mingo and Lincoln counties in West Virginia. “Almost all of our crew members have been economically affected by the coal downturn. There aren’t a lot of job opportunities.”

Crew members who graduate from the program gain an associate’s degree, multiple professional certifications, hands-on experience, and training in life skills areas such as money, time management and emotional health. Similar programs for agricultural and service workers are also being planned.

“We want to give them the tools to reverse the cycle of poverty,” Dennison says.

For Jeff James, chairman of the new nonprofit Create West Virginia, giving tools to individuals, while important, is insufficient. Create West Virginia wants to change the culture in Appalachia so that it’s more conducive to innovation and entrepreneurship. The organization is hosting a three-day conference in Fayetteville in September, “Building Bridges to a New Economy,” the latest in a series of conferences aimed at finding ways to shift the region’s focus.

West Virginia has several creative magnets — areas that attract people who want to come to an area not just for jobs but for a sense of place. These range from geographic locations like the New River Gorge to technology centers like the Fairmont/Clarksburg/Morgantown corridor.

“West Virginia needs to grow creative muscle and the ability to diversify,” James says. “Small towns and the people that come from them need to know they can build an innovation economy. ”

One thing that could certainly help in a number of revitalization efforts is an infusion of cash in the region. This could come in the form of President Obama’s POWER+ Plan, which will devote significant new money to the coalfields if the plan can pass Congress.

The plan would add $25 million in funding to the Appalachian Regional Commission, $20 million a year for re-employment services and job training for laid-off miners, money for grants to help economically distressed communities foster “an environment conducive to job creation and economic growth,” and a $200 million annual boost in spending on reclaiming abandoned mine lands.

“The POWER+ Plan would utilize resources on a scale that a single federal initiative hasn’t done in our region in a very long time,” says Eric Dixon, an Appalachian Transition Fellow at Appalachian Citizens’ Law Center.

“The way the [Abandoned Mine Lands] plan is structured, the money has to be used for projects that pose an economic development potential,” Dixon says. “These sites have potential for beekeeping, agriculture, recreational tourism and other economic engines, but those solutions won’t pop up unless we have a very big public dialogue about this money and this program to spark people’s imaginations across the region.”

The boost to the Abandoned Mine Lands program could be especially important for the region, both in the short and long terms, Dixon says. Getting laid-off miners and others with the necessary skills to reclaim old mine sites back to work will give communities an immediate economic boost. But the long-term impact could be far greater.
Adam Wells, economic diversification campaign coordinator for Appalachian Voices, publisher of this newspaper, is fully behind the plan.

“For so long, Appalachia has been giving away our natural resources, and our cultural and social resources,” says Wells. “It’s really good to see a federal program that gives back to us in a meaningful way, and one that focuses so specifically on moving us forward to a diverse new economy in Appalachia.”

An influx of federal money could be helpful, but many looking to better Appalachia’s economy are wary of waiting for any kind of external savior.

Building on the Past

“Our philosophy is that we already have everything we need to thrive in Appalachia,” says Coalfield Development Corp.’s Dennison. “We have a proud history to build from; enterprising, strong, smart, creative people; vibrant communities that work with the land and close to the land instead of exploiting it.”

The desire to build upon history and use resources that already exist guides much of the work Coalfield Development Corp. does, such as the recent renovation of the Urlings General Store in Wayne, W.Va.

“We like to work in historic, abandoned buildings,” Dennison says. “We like to maintain the character, the sense of stories and history embedded in those buildings.”

And bringing new life to a vacant building is healing. “Empty buildings can be a real scar on a community,” says Dennison. “It’s great to return vitality and purpose to a place like that.”

The former general store is now home to five affordable housing units, built with energy efficiency in mind, including solar water heaters, both because such efficiency is good for the environment and because it helps low-income tenants by lowering their bills.

The building will also house commercial space, including a coffee shop operated by the tenants, who — like the crew members who renovated the building — will be on Coalfield Development Corp.’s 33/6/3 schedule. 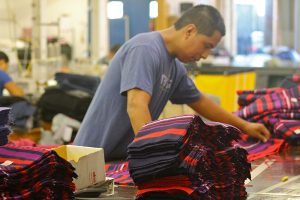 A worker-owner arranges fabric at the Opportunity Threads plant in Morganton, N.C.
Photo by Willa Johnson

Revitalization efforts are underway outside of Appalachia’s coalfields as well. In rural North Carolina, hit hard over the last few decades by the collapse of the tobacco market and the textile and furniture industries, the focus is on re-envisioning what labor looks like through worker ownership.

Opportunity Threads is a worker-owned garment plant in Morganton, N.C., with a focus on sustainable production and building local resources.

“Traditionally, labor in the South involved wealth being taken out of the community,” says Molly Hernstreet, founder and general manager of Opportunity Threads. “Our challenge was to build models in these heritage industries where the wealth can be more deeply rooted in our community.”

Like Dennison, Hernstreet believes understanding Appalachian character is the key to future prosperity. “We’re makers,” she says. “We can hope for change, or know that’s what we’re good at. Let’s find the models that are financially the most viable and create the most wealth.”

For Hernstreet, the worker-owner model makes the most sense, especially in a low-margin industry like textiles.
“We can drive those narrow margins into good hourly wages and benefits,” she says. “Worker ownership lends itself to meeting all the challenges in this industry: Quick turnaround, high quality and a competitive price structure. When a worker is also an owner, they understand the value of their own productivity.”

Opportunity Threads is part of the Carolina Textile District, a cooperative that helps small textile shops work together and aggregate demand.

Sara Chester, part of Carolina Textile District’s management team, says that the idea is to recruit work — rather than companies — to the region. But one challenge has been convincing a new generation of workers to trust in textiles.

“We lost so many jobs in such a short amount of time,” Chester says. “Kids grew up with their parents and grandparents telling them not to work in these jobs. It’s been a real battle to change that image.”

As with much of this work, patience is key. “We’re not going to turn it around in just a year or two,” Chester says. “This is a message we’ll have to reinforce for years to come.”